Home to lords of old and, more recently, a handsome prince

Walking down the approach to Shonai Shrine is a test in concentration. To the sides, flowers tempt with their intoxicating scents and vivid colors, and – if you do a full 180 – you’ll face Mount Haguro, one of the three holy Dewa Sanzan mountains in Yamagata Prefecture. This gargantuan spiritual powerhouse draws pilgrims from all over the country, though many miss a visit to this diminutive shrine in central Tsuruoka city. But, as they say, size isn’t everything. Sometimes it’s the smaller spots that offer the most memorable experiences. Built on the ruins of Tsurugaoka Castle, the former stronghold is now a park with one of the nation’s top cherry blossom spots. In late April, 730 cherry trees explode into flurries of baby pink and snow-white petals, which flutter onto the moat, creating a carpet of pink on the surface. In May, wooden trellises spill over with drippings of lilac wisteria. Behind the ayame iris garden is the takifuji – a wisteria waterfall. This giant vine stands 20 meters tall, and when a breeze blows through, it creates the illusion of a rippling flow of lavender-colored water. With each season comes a new discovery, both in the park and the shrine precinct within.

At the shrine’s entrance, the purification font is filled with seasonal blossoms. The floating petals perform two roles: one, they offer an opportunity for stunning photos and two, they discourage people from using the fountain for the ritual purification of hands and mouth. For now, hand sanitizer will have to do.

The New Kid on the Block

As shrines go, Shonai Shrine is a relatively recent addition, founded about 140 years ago. Meiji period leaders ordered the samurai class to be dissolved, and all castles – with some exceptions – were dismantled. Tsurugaoka Castle was taken apart and, in its place, Shonai Shrine was constructed. The old castle’s roof tiles, wooden boards and even pillars found new homes in the shrine’s worship hall and other buildings. The former head of the Sakai clan was enshrined here, a testament to the family’s approximately 250 years of prosperous ruling of the Shonai region. The shrine’s emblem – the leaves of a creeping wood sorrel plant – is borrowed from the Sakai family. Nearby Chido Museum and Chidokan, the old Shonai domain academy, offer more insights into the daily life of samurai in the region. 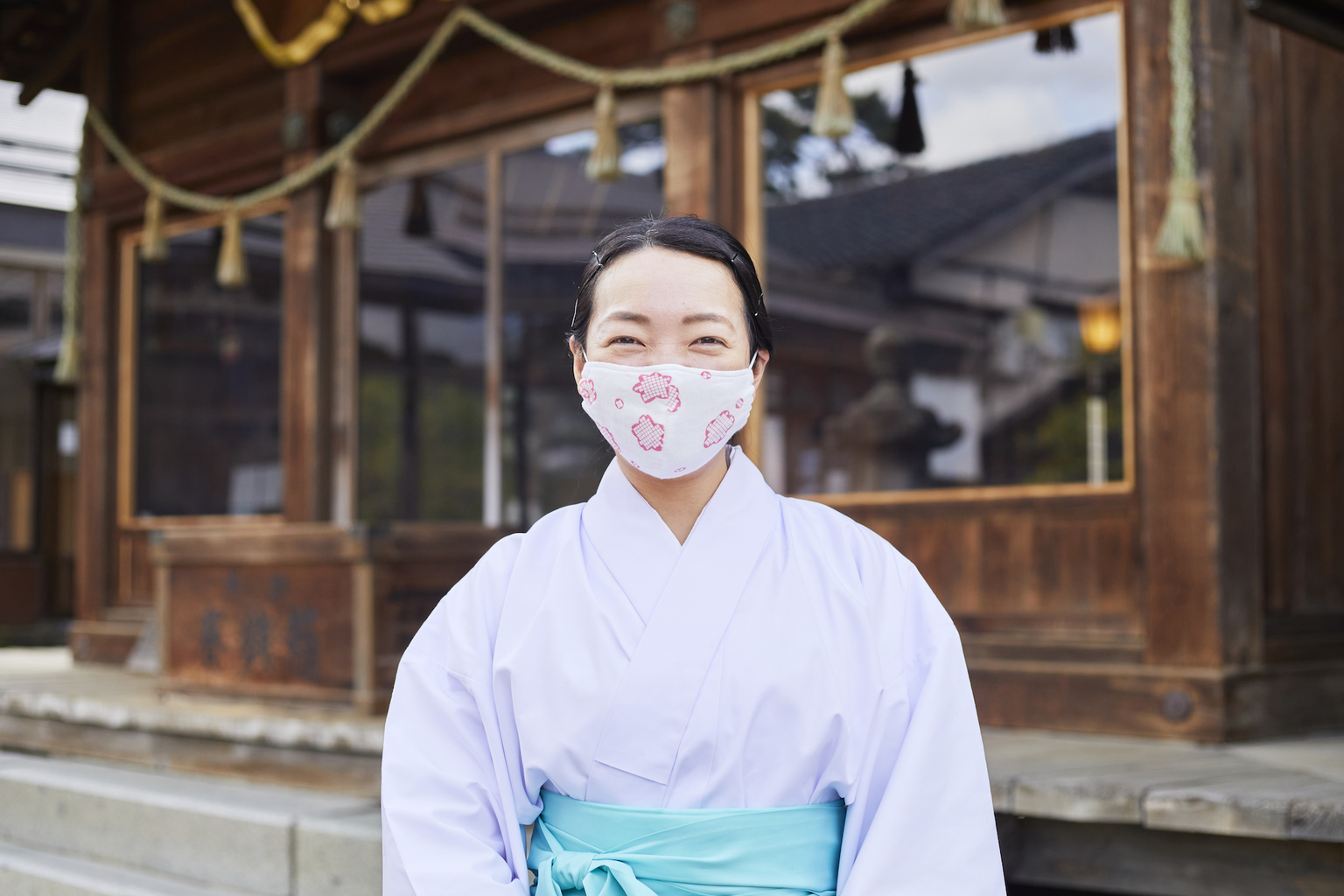 Getting the Word Out

Drawing people to a smaller shrine, even when it’s conveniently located, isn’t always easy. Wakako Ishihara, one of Shonai Shrine’s Shinto priests, posts daily behind-the-scenes pictures on social media. “At first, the shrine didn’t even have a website. It was hard for people to know the history of the shrine before coming here and it was difficult for people to find out about us. I think a lot of shrines suffer from people only coming for important early life ceremonies and annual events, like hatsumode. I wanted people to know about us, but also let them feel closer by showing them festival preparations and sharing new information.”

This has been especially important during the Covid-19 pandemic. Ishihara continues, “There are many people who want to come visit but can’t, or who can’t return to their hometown. So, I try to share a piece of this place through photos on social media. When the weather changes, you experience the shrine in that moment. But if you can’t come, you would normally miss this.”

Ishihara also shares images and videos of seasonal goshuin shrine stamps, each one a colorful representation of a timely flower or event. One of the most popular themes is of the mizu-omikuji fortune slips. Upon first appearance they look like blank pieces of paper, but by dipping them in a bowl of water – often decorated with stones or flowers – your level of luck and advice for the future gradually appears, as if by magic.

Oji: The Cat that Lived a Million Lives

Ishihara got an unexpected boost to her social media campaign in 2017, when she posted a picture of Oji (that’s “prince” in Japanese) the shrine cat, lounging on the carefully raked karensui dry landscape garden. The reaction was instantaneous, racking up over 100,000 likes and more than 50,000 shares. “I uploaded it because I thought it was cute, not thinking much of it at the time. But soon we got calls from TV stations and newspapers from all over Japan. They wanted to recreate the scene, but as he was a cat, he was quite capricious. Sometimes he wouldn’t appear at all, and if he was around, we couldn’t tell him what to do,” she recalls.

Oji became a popular fixture at the shrine and even had his own business card. Sadly, he passed away in early March 2020 at the impressive age of 14. His memory, though, lives on. Visitors can ask for one of his cards at the main reception desk and the shrine has held photo exhibitions so that his devil-may-care attitude and striking good looks can live on. Ishihara says, “More people came to see Oji than any of the shrine staff. Even now after he’s gone, people smile when they talk about their memories of him. We even get asked when Oji the Second will make an appearance. If there is an opportunity then maybe…” Where to Find Shonai Shrine

Explore the grounds in person, or find out more about Shonai Shrine’s activities through their social media posts. Designed by lauded architect Shigeru Ban, Shonai Hotel Suiden Terrasse’s simple minimalist design creates a seamless connection with the environment around it. In early summer, the surrounding water-filled rice fields create reflections, making it seem as if the hotel is floating above them. Inside, wooden panels and furniture envelope you in a luxurious warmth, while the floor-to-ceiling windows keep the natural surroundings close. Spend your night relaxing at either the sake bar or sake lounge, both of which serve local brews, or in the curated library spaces that boast about 2,000 books on design and more. The restaurant prides itself on serving farm-to-table seasonal ingredients and regional wines to match. Or, relax in the spa area with its hot spring baths and its most recent addition: genuine Finnish-style saunas.