While most of the world typically celebrates the New Year with fireworks and Champagne, Japan's long-held end-of-year family traditions still hold strong.

Surrounded by friends and usually with a drink in hand, much of the world celebrates the New Year by counting down to midnight and watching the sky burst into a dazzling fireworks display. In Japan, however, things are very different. Rich with ancient traditions and customs, Oshogatsu (the New Year period) is one of the most important holidays of the year.

Preparing for the End of the Year

On January 1, every household is believed to be visited by Toshigami, a god that brings good luck for the New Year. In preparation for this special occasion, there is a whole checklist of things that need to be done.

The first task to complete is osoji. From December 13, people begin a meticulous cleaning of their house, work place, school and neighborhood. They scrub the floors, dust the tops of shelves and get rid of clutter, making the space completely spotless. This custom originated as a purification ritual that symbolized cleaning not only one’s house, but mind and soul out of respect for the New Year deities.

Once the cleaning has been done, people shift their focus to others. Nengajo is a New Year greeting postcard sent to relatives, friends, colleagues and other acquaintances, thanking them for their kindness over the past year and wishing them well for the coming year.

The origins of nengajo are believed to date back 1,000 years, when people in the Heian Period would send New Year letters to let others know they were alive and well. These days, Japan Post hires thousands of temporary staff to ensure the millions of cards all reach the recipients’ hands on January 1. Despite the declining tradition, this year again, as a result of the very prolonged self-isolation period due to the coronavirus, more people are looking into sending nengajo to old friends and relatives to check on them and remind each other that we are all in this together.

As the last day of the year draws close, people put up oshogatsu kazari. Made of bamboo, pine and straw, these New Year decorations are hung on the front door of houses or set up at shop entrances to welcome Toshigami and ward off evil spirits. Inside, people display kagami mochi, a two-tiered circular rice cake topped with an orange, as well as ornaments that represent the Chinese zodiac animal for the coming year — for 2022, this is a tiger.

December 31 is called Omisoka. By now, all of the New Year preparations have been finished and people are finally able to relax and spend quality time with their family. It’s customary to eat toshikoshi soba, a special dish made of extra-long buckwheat noodles that symbolize a long life, strength and resilience.

Just before the clock strikes midnight, Buddhist temples carry out the ritual of ringing their bell 108 times. This custom, called joyanokane, cleanses us of the 108 worldly desires that may have built up over the past year, and marks the official beginning of the New Year.

In Japanese, people say “akemashite omedetogozaimasu” to wish each other a happy New Year. The first day of the year often starts with hatsuhinode, witnessing the first sunrise. It’s believed this is the moment when Toshigami arrives. In Tokyo, people flock to observation decks like Tokyo Tower or mountaintops like Mount Takao to see the sun come up.

Between January 1 and 3, people partake in hatsumode, the first shrine visit of the year. This is a massive event, and popular shrines like Meiji Jingu see millions of visitors within those three days who come to pray for health, happiness and prosperity. At the shrine, it’s common to purchase New Year luck charms such as daruma dolls and hamaya arrows, and sip on a warm, sweet drink called amazake. This year, to prevent the spread of Covid-19, it is likely that people will be discouraged to visit shrines massively. However, one can still visit a less-crowded shrine in their neighborhood or at the very least avoid going to major venues like the Meiji Shrine during the first days of the new year.

Children are gifted with otoshidama, an envelope of money; fly traditional kites called takoage; and play karuta, a traditional card game. During the New Year period, many people also love to hit the shops to get their hands on a fukubukuro, mystery bags full of goods sold at a discounted price.

Oshogatsu celebrations start to wrap up around January 4, and people return to their regular routine with a sense of renewal and an eagerness to fulfil new goals over the next 12 months. Let us hope that 2022 will be a better year than 2021!

How will you be celebrating this year’s holidays? And which of these Japanese traditions do you follow? Let us know in the comments.

This article was updated in December 2021. 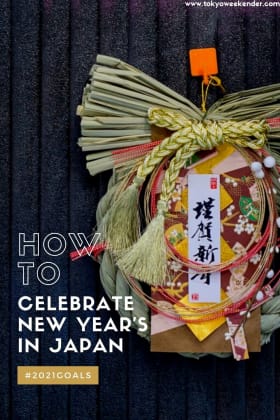