New Year’s Eve in Japan is a time for relaxing after a long week of osoji (deep cleaning) and preparing osechi ryori (an assortment of pre-made festive food). Many families will gather together to eat soba (buckwheat noodles) and maybe head to the shrine for hatsumode after midnight. This soba noodle tradition is called ‘toshikoshi soba,’ literally meaning: year-crossing soba.

When I arrived in Japan, I ended up working for two years in a hand-rolled soba restaurant called Shinnenura Komatsu-an, run by the Okamoto family. Since then, each year when New Year’s Eve comes around, they ask for a helping pair of hands to handle the crowds outside lining up to get their toshikoshi soba fix.

For those new to the world of soba, here’s a quick guide to everything you need to know about one of Japan’s oldest dishes. The tradition of eating soba on New Year’s Eve is generally believed to have been started around the mid-Edo Period (1603-1867) in Osaka. There are many theories as to why.

According to the Tokyo Soba Association, the main reason has to do with the length and thickness of the soba noodles. Compared to udon, they are a lot thinner and longer. Longer noodles mean a long life and a happy home. Thinner noodles means they’re easier to cut and this is said to cut off the misfortune from the previous year and start the New Year fresh.

According to the Soba Association’s site, another reason that Japanese people eat soba on New Year’s Eve is for prosperity. Goldsmiths used to use the fine soba flour to collect stray gold dust or gold lacquer, as it picked up the gold easily. Through this, eating soba is said to bring gold to the household for the coming year. Hot soba noodles generally come in one bowl, already resting in hot soba soup made from katsuo dashi (fish stock). In the soup are various toppings and flavors that vary depending on the soba restaurant.

In Okamoto’s soba restaurant, the most popular hot soba is Iberico Pork: slices of Spanish pork in a hot soup, topped with yuzu and mitsuba. Many people like to sprinkle in kuro-shichimi, which is a Japanese seven-spice with added black sesame and black pepper. 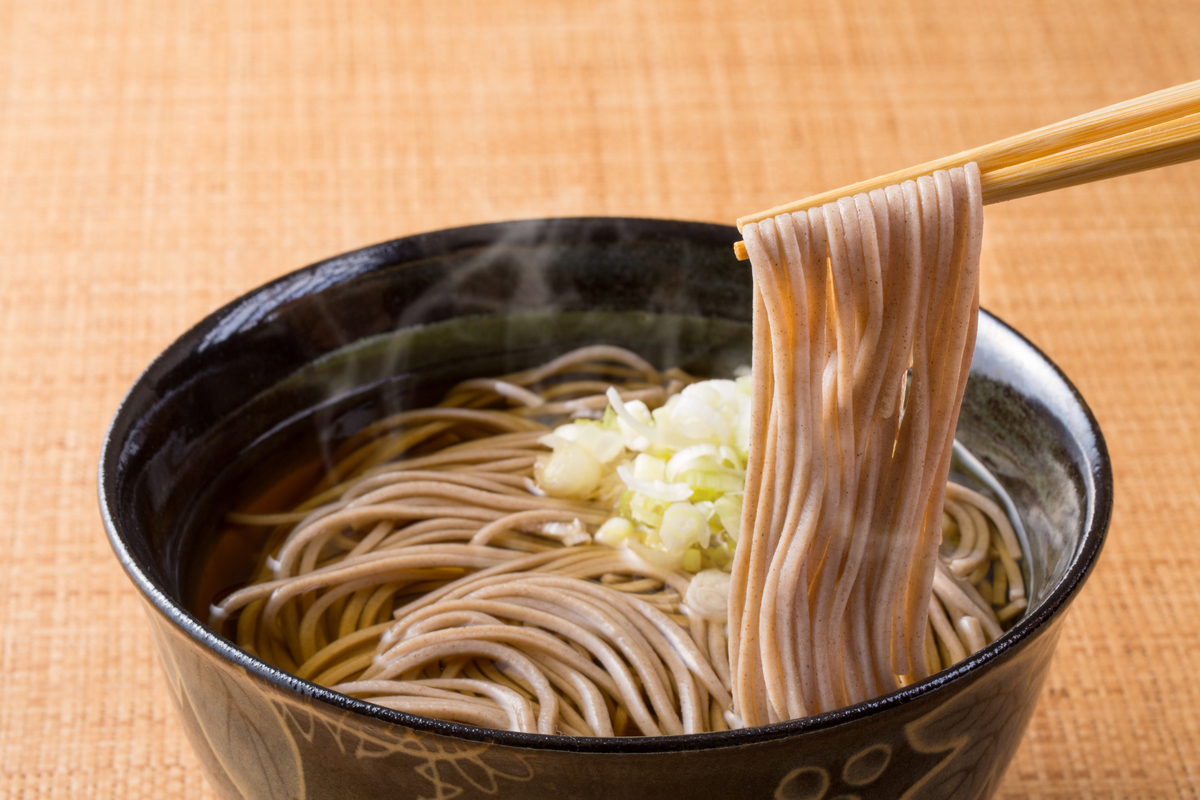 Chef Hideyuki Okamoto, who trained in a specialist soba school for three years and has been running his father’s restaurant for 30 years, always puts out kuro-shichimi for pork dishes. I spoke to his wife, Sayako, who explained: “Kuro-shichimi contains black pepper, which is closer to Western-style cooking and matches the flavor of the Iberico pork which is from Spain.”

It’s this careful pairing of ingredients that made me come to appreciate soba for its delicacy and subtle flavors. I personally love Yama-kake-soba which is grated Japanese yam in a hot soup, topped with an egg, nori, yuzu and mitsuba. These are just two of many varieties, and you can always go for the simple classics too. Cold soba noodles, otherwise known as dipping noodles, come with a bowl of dipping soup. The cold soba is arranged on a ‘zaru,’ a small, slatted bamboo dish. On the side there will be a small plate with wasabi and spring onions, sometimes a tiny quail egg too. You’re supposed to tip the spring onions into the dipping soup and add wasabi to taste. Then take the noodles and dip them into the soup, slurping as you go.

Slurping soba is a sign of enjoyment and even, so it is said, adds to the taste. Finishing all the noodles also indicates that it was delicious. When dishes come back to be washed, Okamoto-san often checks to see if everything has been eaten. If not, he will wonder why the noodles weren’t good and how he might make them better. Sometimes, if a customer can’t finish, they will come and apologize for not eating everything. December 31 is the busiest day of the year for soba restaurants, but also a very important day for traditions. Many will often serve limited types of soba on this day. In the Okamotos’ restaurant they serve gold leaf soba on December 31. “In Japan, gold leaf is considered lucky, so we add it to food on special occasions. With this soba we wanted to bring luck and prosperity for the new year,” the Okamoto family explains.

If you’re in Japan for New Year’s, spend it like a local by heading to your nearest soba restaurant. They are everywhere, they are affordable and it’s a great hot and nutritious meal. Maybe you’ll even get to try a once-in-a-year specialty!

To learn more about other New Year’s traditions in Japan, check out this article.