The most substantial collection in English of Basho's poetry, letters, travel journals, and more

For our latest entry, we present the most substantial collection of poet Matsuo Basho’s works in English. Basho 4 Humanity is a free online collection of translations of Basho’s renku links, tanka, letters and spoken word along with his haiku, travel journals, and essays, all thanks to the hard work of translator Jeff Robbins. He hopes this free online resource will inspire and empower all of humanity.

The website splits Basho’s works into different categories and themes, such as works focusing on animals, food, drink and fire, love and sex, and so on. However, in this TW Creatives, we bring you a selection of Jeff Robbin’s recent translation endeavor titled “20 Visions of Women”,  where he has selected twenty Basho poems that have women in focus.

Wrapping rice cake
with one hand she tucks
hair behind ear

The translator shared with us that this is one of his favorite Basho poems. “Here is Basho’s Mona Lisa, his most graceful hidden woman. Only Basho has the delicacy and precision to draw such a moment out from the flow of a woman’s everyday life.”

Only my face
by rice-seedling mud
is not soiled –
Breastfeeding on my lap
what dreams do you see?

Translator’s note: This is an image of a woman emerging from fertile paddy mud to breastfeed her baby. Her entire body soiled and roughened by work, with only well water to wash in, and still, she tries to keep her face clean and pretty. She is praying that her child will escape the constant work and ever-present grime of village life to a brighter and more prosperous future.

Has any other male poet produced so exquisitely feminine a poem? Feminine in concern for facial beauty and cleanliness, the femininity of women at work, women with breasts, women nourishing life, and women’s dreams and hopes for children’s future, all wrapped up in five short lines.

Translator’s note: Basho continues with a female voice chanting the Lotus Sutra, beginning with nam myo renge kyo, which for many East Asians contains the ultimate and complete teachings of Buddha; it declares that a woman need not reincarnate as a man to reach Nirvana, but she can do so from being a woman.

She chants not in priests’ monotonic drone, but rather elegantly, musically, as a celestial maiden caresses clear water. Her path to Enlightenment is not inside a temple, but rather beside the window watching the world in sunshine while she sings the words of Buddha. In both stanzas, the material and spiritual blend through the female. Read the rest of the poems in this series on the Basho 4 Humanity website, the women theme category. 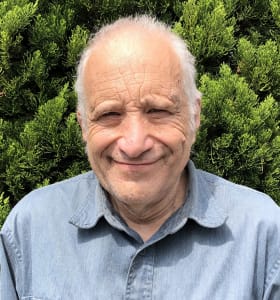 Jeff Robbins is an American living in Fukuoka. He began exploring and translating the poetry of Basho while practicing Aikido forty years ago in California. From there, he went on to study Basho’s prose, letters, and spoken word in Japanese without university affiliation. Robbins is especially inspired by the depth and power of Basho’s visions of women, girls, and goddesses. He hopes to move to either Tokyo or California and join with allies who will enable Basho’s femalism (a term Robbins has coined) to empower women struggling to rise up from centuries of patriarchal subordination.