The Best Japanese Love Haiku to Read to Your Valentine

In between musings on cherry blossoms, autumn leaves, and frogs jumping in ponds, Japan’s literary greats also wrote about romantic love. These poetic flashes of romance are not always obvious, with haiku being multilayered opaque micro poetry by nature. Kobayashi Issa’s lovers are always cats instead of people, and sometimes there’s another layer of the cats playing roles of romantics from literature like Genji from Genji Monogatari.

Even more often love in traditional Japanese haiku is unnamed but signified through keywords, just like certain flowers are kigo (seasonal word) showing us the season without spelling it out. Fireflies in haiku mean summer, but also a brief ephemeral summer romance; blossoms can also hint at blossoming young love. And everyone in the past would have known that wearing a kimono loosely around a man meant a close relationship of trust with that person.

Maybe Japan’s haiku poetry masters of the past were not as specific or prolific when it came to love haiku, but modern haiku poets have written more on that theme. However, haiku genres also increased with modernity, so if the love haiku does not contain a seasonal word many would argue it is called a ‘senryu’. Regardless of categories, here are some of the most poignant, playful and romantic love haiku written by Japanese poetry masters. Matsuo Basho is one of Japan’s most beloved and world-famous poets. He inspired numerous Japanese poets coming after him, as well as whole poetic movements abroad such as the Imagists and the Beat Generation poets. This traveling 17-century Edo poet distilled the beautiful landscapes he saw in haiku and published them in poetic travelogues read to this day. His haiku often went beyond the classic seasonal appreciation of nature, instilled with emotion and detail to reflect Basho’s real-life experiences.

Here are two love haikus of Basho that capture small moments of gentleness and have multiple layers of meaning. In the first one,  a woman (lover or mother) lends her arm to be a pillow for someone (a lover or a child). In the second one, a poet admiring a woman hard at work, or a romantic seeing beauty in every small touch of a beloved.

Easing in
her slender forearm
for his pillow

Leaf-wrapping the rice cakes,
with one hand
she tucks back her hair. 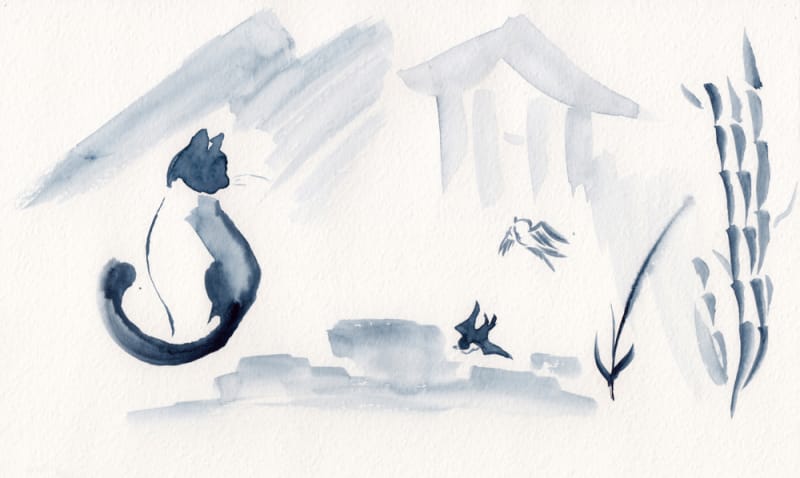 One of the four great haiku masters of Japan, along with Basho, Buson and Shiki, Kobayashi Issa was a poet and a Buddhist priest living and writing in the late 18 and early 19 centuries. He is one of the most humorous haiku poets of the times, punctuating the classical haiku musings with witty remarks. No wonder he wrote about lover cats, snails climbing Mount Fuji, or just deadpan not caring about the New Year. He wrote more than 20.000 haiku poems, half of which are translated by David G. Lanoue and available online. Here are two of his cat love haikus:

The pining cat
is smitten with love madness
most probably

at dawn
the homeless cat, too
cries for love

And a spring haiku that signifies friendship and community, the beauty of shared joys, as well as a possible budding romance:

花の陰赤の他人はなかりけり
(hana no kage aka no tanin wa nakari keri)

Under the cherry blossoms
strangers are not
really strangers A beloved haiku master of the 20th century, Suzuki Masajo (1906 – 2003) was particularly known for her love haiku. And she had a myriad of stories to tell, from her unhappy arranged marriage to her divorce and subsequent move to Tokyo to start a new life where she became a poet and a Ginza bar owner. Her love haiku covers all intricacies of love, even infidelity and heartbreak. Here are two of her most romantic poems:

longing for love—
I place a single strawberry
in my mouth

What is your favorite haiku? Let us know and we can include it in future selections.