5 Things You Might Not Know About Matsuo Basho, Japan’s Greatest Haiku Poet

You don’t need an affinity for poetry to know about Matsuo Basho‘s legacy. We owe him for more than a single haiku about a leaping frog — fact is, there might not have been any Jack Kerouacs to study in American high schools had it not been for the first English translations of Basho’s anthologies. Though one of Japan’s most revered poets, few of us know details about his private life, his presence in the literary world of his time and his great influence on Western literature. Here are five things about the poet you may be reading for the first time.

1. Basho could have been a samurai

Though we know from his correspondences that Basho loved poetry from a very young age, his first haiku was only published when he was in his late teens. Before taking the plunge into a literary career, he worked for Todo Yoshitada, a local feudal lord in his hometown who also happened to have a penchant for poetry.

There is some speculation as to what tasks Basho was responsible for in the household, with some suggesting he was a page boy and others, a kitchen clerk. Regardless of how he started, however, he was on the path of becoming a samurai, or at the very least, would have had that opportunity given to him. But in 1666, Yoshitada passed away and Basho decided to give up his life and potential samurai career to study poetry and eventually move to Edo where he would teach his disciples.

2. Basho traveled — a lot. He had as many as five hermitages around Japan

Travel was an essential part of Basho’s life. It was his way of sourcing inspiration from nature and the towns around the country. In fact, it’s believed that he wouldn’t spend too much time staying put without planning his next journey. Located in various places, Basho had as many as five known hermitages around Japan that he would use as minimalist accommodations.

One remains standing today: Minomushian, located in the city of Iga, Mie Prefecture. Fans of Basho can visit and take a closer look inside the building for a historical peek into how the poet supposedly lived during his travels. 3. Every year, there is a Basho Festival, celebrated on October 12

Iga City is also the place of the Basho Memorial Museum, where fans can learn more about his life and work. October 12th was thought to be the day of the poet’s death at the time of the festival’s conception. (Experts have later confirmed that Basho actually died on November 28). The festival features a variety of activities, including poetry contests (a national haiku contest, too) and pilgrimages to places of interest around Iga, including the remaining hermitage.

4. Basho wrote haiku about love and sex, too

We are often led to believe that haiku is meant to describe nature’s beauty, no matter how small. However, digging into Basho’s work, we easily see that his subject wasn’t so limited in practice. In fact, his poems were often about humanity and his observational eye was as much on the cranes along the lakeshore as it was on people. His body of work includes several haiku on the topic of love and sex, some that certain experts believe have been inspired by Basho’s own sexual endeavors with both men and women.

5. Basho’s last words were a haiku

While it sounds very dramatic, knowing how deep his love for his art went, it’s not too surprising that Basho’s last words (or at least, his last note to his disciples) were a hunting haiku. There are two poems that are believed to have been his last:

The above poem is most commonly stated as Basho’s last haiku. However, some experts say that a summer haiku, which this particular poem would fall under, doesn’t quite make sense considering Basho died in winter. Below is another haiku that Basho would have recited shortly after:

One can only dream of leaving this world with such an impression. Basho not only changed Japanese poetry, shifting its very nature into the modern era that would follow but he still influences hundreds of thousands across the globe to look to poetry or prose as a vehicle for communicating their vision of the world. 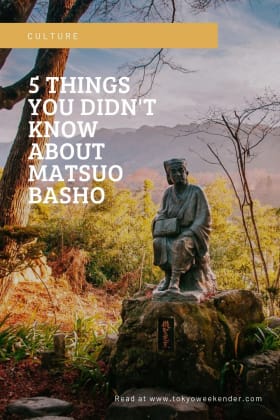