Thankfully, there’s been an increase in the translation of Japanese authors in the last few years. I remember when I was in university, and all I could find on the shelves was Murakami and Mishima. While waiting for more contemporary authors to read, I relied on North American authors of Japanese descent to transport me to Japan or give me some insight on the Japanese communities abroad.

Ruth Ozeki has made her place in the literary world with her witty and intelligent novels. I read A Tale For the Time Being in university and loved how the cultural details sprinkled throughout the book reflected the years Ozeki spent in Japan in a modest and realistic way. While this book is, of course, great for those who either dream of visiting Japan or love a good story set in Tokyo, I’d recommend it for anybody who enjoys a story that blurs the wall between fact and fiction. You know, the kind that makes you fall into a Wikipedia rabbit hole at two in the morning.

Yoshiko Uchida wrote more than 30 books, all surrounding the issues she was confronted with growing up in America in the mid-20th century. When the Japanese forces attacked Pearl Harbor in 1941, Uchida and her family were among the thousands of Japanese Americans who were robbed of their homes, their citizenships and civil liberty. Despite a three-year internment across the United States, Uchida became an award-winning author known for her raw historical fiction that she would publish in the shapes of everything from memoirs to children’s books.

Julie Otsuka is a must-read author for stories that shed light on the forgotten lives of the growing Japanese community in early 20th-century America. Otsuka’s novels are filled with hardship and unfortunate turns of event, but tell the stories of a few good days too. Her second book, The Buddha in The Attic, traces the picture brides as they sail to the United States to discover a world full of challenges in the form of a new language, new customs, childbirth and the lead-up to the First World War.

Magic realism is something that Japanese authors, or in this case authors with Japanese roots, tend to do extremely well. Karen Tei Yamashita’s third novel does just that, but with complicated commentary. Tropic Orange is amazing in that it speaks to everybody and manages to fit centuries of American history in a digestible few hours. While it might not be her work that explores her roots the most, I think this book explores and expresses her frustrations as a Japanese American in an interesting and introspective way.

While Mary Yukari Waters was born in Japan, she moved to America at the young age of 9. Her books offer amazing insight into the complex feelings and the loss of a clear identity that comes with the violent clash of two contrasting cultures. Her first book, The Laws of Evening, is a collection of short stories set in Post-War Japan when American culture first came to the country.

Have you joined the Tokyo Weekender Book Club yet?

Join us as we dive into (mostly) contemporary books that are either written by Japanese authors, are set in Japan, or have some sort of connection with Japan.

See what we’re reading this month 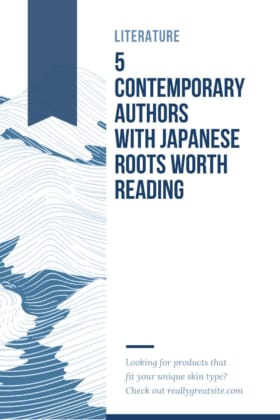