5 Japanese Books That Made Me Fall in Love With Japan

Before I could work and pay for my own transportation, books were the only way I could imagine myself outside of my hometown. Cheesy, right? Naturally, as an avid young reader, I gave writing a try too. I’d give you an example of my prepubescent writing if it wasn’t for the fact I flushed it down the toilet when I was 16. In hindsight, that’s probably where it belonged.

Books are also what brought me to Japan. Since I moved here I have read more than two dozen books written by Japanese authors, but I wouldn’t be where I am today without the following authors providing early inspiration.

The First One: The Wind-Up Bird Chronicle by Haruki Murakami (translated by Jay Rubin)

When I was fresh out of high school, Murakami hadn’t hit the shelves by storm as he did a few years later. Today, there isn’t a soul on the planet who hasn’t read one of his novels, as he quickly became the most accessible Japanese author overseas. Back in 2012, however, there were few titles that I could find in English, and The Wind-Up Bird Chronicle was one of them.

This book took me about four months to read. It’s lengthy and tiring because of its excruciating amount of detail, but it wasn’t Joyce or Proust, so I kept reading. I often found myself having to go back a few chapters because I couldn’t remember what had last happened in one of the many storylines. While the novel was good and the ending unsatisfyingly satisfying, it wasn’t good enough to make me sick with Murakami fever. I have yet to pick up another one of his books, but I can’t deny that I owe him this endless curiosity for Japanese literature that would eventually make me study Japanese and lead me to migrate from a small Canadian city to the busiest metropolis in the world.

This book ranks among my top three titles of all time, and that’s a bold claim. While Ogawa’s style ventures a little further into magical realism than Murakami, I truly felt transported onto this strange island as early as page one.

The characters were as human as they can be in printed words, with qualities and flaws; it was impossible not to be moved by their awful and inevitable fate. The plot of Cristallisation Secrète echoes the feelings of nostalgia and fear of abandonment or detachment with something that was once familiar. I think this story is also about starting fresh, something that, historically, Japan has had to deal with more regularly than your average country.

After reading Ogawa, I fell into the world of Japanese contemporary literature, and I fell hard. I wanted to learn about the country’s history, beyond what I had learned in class. The Unpopular Favorite: The Temple of the Golden Pavilion by Mishima Yukio (translated by Ivan Morris)

Even amongst Japanese bibliophiles, Mishima is a hard author to love. When they hear “Mishima,” most people think of his dramatic suicide in 1970. I read The Temple of the Golden Pavilion in a Japanese contemporary literature class. It’s a small, but powerful, complex book that I had to swallow in less than 14 days.

The young protagonist develops an obsession with Kyoto’s famous Golden Pavilion. This temple was at first a symbol of perfection. When he noticed that it, too, had flaws, he became possessed by the fantasy of destroying it; beauty could only be restored through violence, and he eventually set the building on fire.

For the Poets: The Narrow Path to the Deep North and Other Travel Sketches by Matsuo Basho (translated by Nobuyuki Yuasa)

Poetry was my first love, and Basho’s haiku was when I first started to drift from the Western to the Eastern repertoire. Baudelaire’s Flowers of Evil didn’t quite cut it for me after I read The Narrow Path to the Deep North and Other Travel Sketches. More than the beauty of haibun, it was the intimate relationship with travel that pulled me in. It didn’t take long before I was browsing websites like TW and making a list of every place I wanted to see. Around this point did I start feeling the need to actually fly to Japan. This is also the point when I started learning the language (and boy did I shoot myself in the foot).

This collection of poems is what got me interested in travel writing, and while I’m far from being able to publish my own musings on Japan, it’s always nice to go back and flip through a few before a short trip. The Unexpected One: The Life-Changing Magic of Tidying Up by Marie Kondo (translated by Cathy Hirano)

Bet you didn’t see it coming.

Since her Netflix special, Marie Kondo has grown into a viral phenomenon and internet meme. Her signature KonMari method has made many around the globe start a vicious cycle of endless cleansing. Some are outrageously disappointed in her methods, finding them unfulfilling or not as thorough as the author claims, but I actually found it helpful to rethink my relationship with what I owned and also what I wanted to own.

As I moved to Japan and experienced what it was like to live in a tiny room with no counter space in the kitchen or space to lay down in the bath, I started thinking about space differently. I’ve made peace with it, and how I organize and manage my belongings, especially as I’m hoping to move to a new house, is heavily based on what I read in this book. 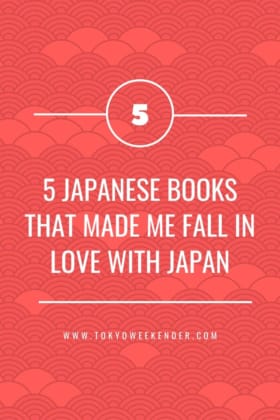