As digital as our lives are, there’s still something to be said about curling up with the printed word. Here are a few places around town where you can unplug and pick up one of those things whose pages can’t be turned with a swipe on the screen. Looking for ideas on books to buy? Head over to “Essential Books for Your Japan Reading List.” After spending several years producing advertising materials for car manufacturers, Kennichi Kato left the rat race to spend a year traveling the world. When he returned he rented a small space in Shimokitazawa and built his bookstore/café by hand. Kiryuusha  (which means “hut where the spirit flows”) opened in 2007. It’s a tiny bookstore/café/meeting space that fits into a 12-square-meter room. It’s the kind of place that could probably only exist in Japan, and it’s absolutely perfect for Shimokitazawa. If you’re interested in alternative lifestyles or just want to take a short trip out of the ordinary, this is the place. Dominic Ward (Nick for short) co-owned the much-loved Caravan Books in Ikebukuro for many years. After closing that shop down, he was selling a great deal of his stock online, but felt the quixotic call of opening a store for used books in English (there’s also a small stock of texts in Spanish, German and a few other languages) once again. If the sheer fact that it’s one of the only bookstores of its kind in Tokyo weren’t enough, the regular music events series that Infinity runs is also something to cheer about. Finally, if you’ve been going into Game of Thrones withdrawal, Nick’s Yorkshire accent will have you briefly back in Westeros over the course of a chat. As for the stock, there’s everything from Japanese textbooks to fiction – literary or mildly trashy – but Nick says that the New Age/spirituality books are some the store’s best sellers. Could it be that the gaijin experience awakens a hunger to seek life’s deeper meaning? 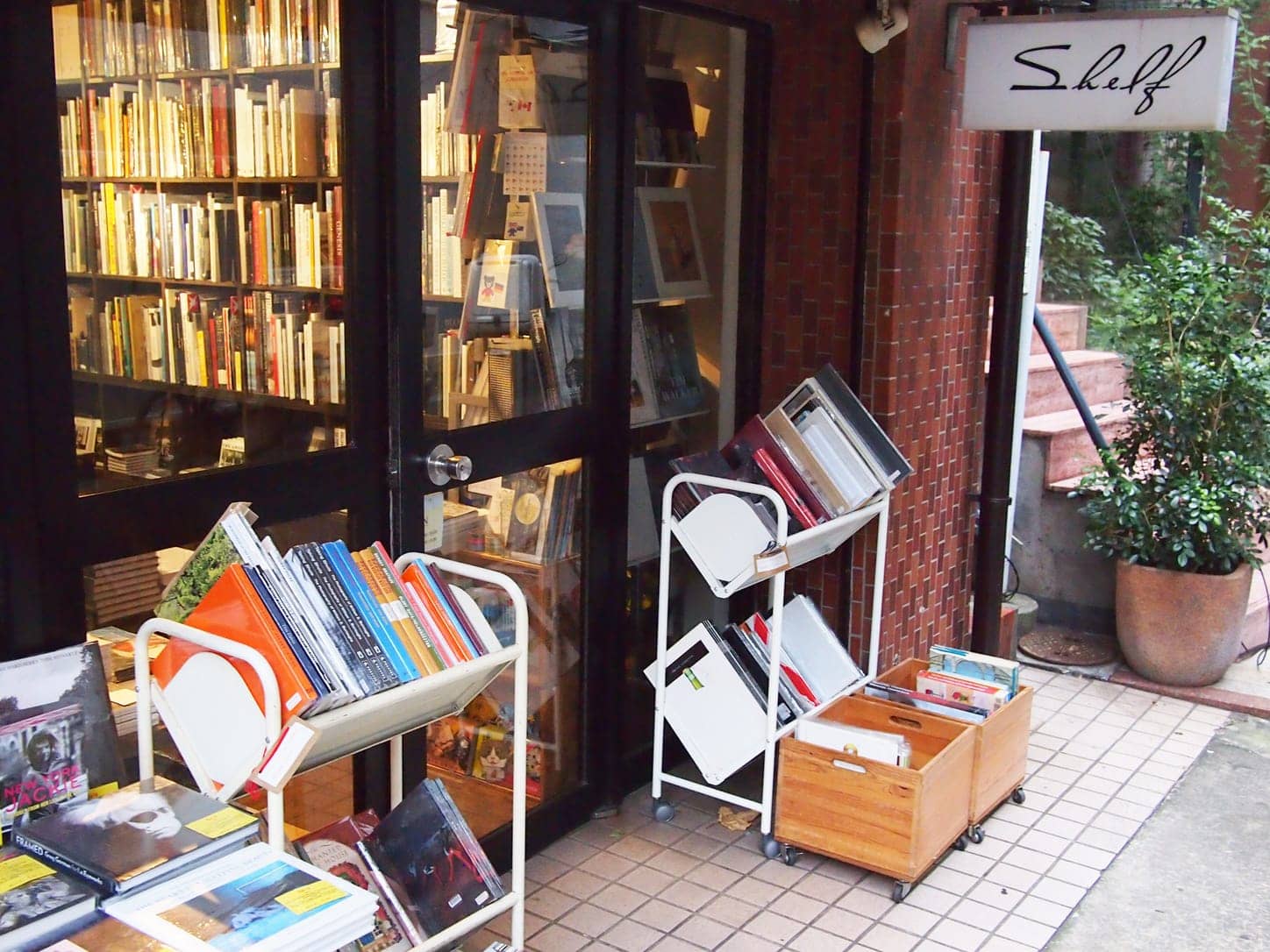 Shelf opened in 1994, and its mix of English-language photo collections – everything from zine-like publications and art journals to hefty monographs and limited printings – draws art lovers both foreign and domestic. It’s the kind of place where you can easily find the hours slipping away as you page through books of photographers you may have known, or never heard of. It’s just around the corner from the Watarium Museum of Contemporary Art, so it can serve as a pleasant appetizer – or dessert – for a weekend afternoon’s aesthetic session. When we popped by, we were intrigued by Ryuichi Ishikawa’s Okinawan Portraits 2012-2016, which reveal another side of life on Japan’s southernmost islands, and we found ourselves smitten by the tomboyish muse who lounged on the pages of Valerie Phillips’ Sara Superhero. Find books, music, movies and food at Tsutaya’s T-Site, which some say is one of the most beautiful bookstores in the world. It’s a place where you can enjoy literature and architecture at the same time. The shop’s white exterior has a laced “T” letter facade designed by the renowned architectural firm Klein Dytham. Inside, the design is inspired by Tsutaya’s theme, “A Library in the Woods.” We recommend going upstairs and curling up with a book at the Anjin Library & Lounge, which has over 30,000 vintage magazines from the 1960s and 1970s as well as a café. T-Site also has branches in Roppongi, Nakameguro and in the GINZA SIX department store. Founded in 1927 by Moichi Tanabe, Kinokuniya’s first book store was opened in Shinjuku. Although the building burned down during an air raid in 1945, it reopened a few months later and expanded with more shops around the country. Today, it’s the largest bookstore chain in Japan, and also boasts nearly 30 stores overseas. In August 2016, the Shinjuku South branch underwent a renovation, reopening with a sole focus on foreign language books. Now called Books Kinokuniya Tokyo, it takes up the entire sixth floor of the building, boasting more than 100,000 publications, the largest foreign books selection in the chain.

While there are several bookstores in Tokyo where you can buy English books, Books Kinokuniya Tokyo offers more variety by catering to French, German, Italian, Spanish and Chinese readers. They cover multiple genres, so fans of manga, sci-fi, art, and other niche areas can happily spend hours browsing the shelves here. And it goes without saying that all the latest fiction and non-fiction are on offer, as are educational materials, magazines, and children’s books. Plus, they have free Wi-Fi. One of the biggest independent publishing fairs in the world, this book fair only comes around once a year in October, but is well worth the wait. Now held at Museum of Contemporary Art Tokyo, the three-day event features hundreds of creators, from illustrators and artists to graphic designers and photographers. If you love art, books and magazines then you will be pleasantly overwhelmed by the abundance of printed matter on offer. Talks, workshops and special events are also scheduled throughout the weekend. This is always a fantastic opportunity to meet the creative community first hand and pick up some eclectic and hard-to-find printed treasures.

If you are looking for fellow bibliophiles to share your book-seeking adventures with we invite you to join the TW Book Club. We commit to one novel per season and talk about it on Goodreads.