5 of the Best Japanese Kids’ Shows on Netflix

These shows will help your preschooler take their Japanese to the next level (while having fun!)

We all know that too much screen time is not ideal for young brains. But, in trying to raise a bilingual kid on Japanese soil, sometimes the media can come in handy. To help kickstart my daughter’s Japanese before she starts school, I have been turning to Netflix Japan, with its multiple offerings for the preschool crowd. Nontan, a mischievous white cat, and his band of furry friends hail from a classic Japanese children’s book series by Sachiko Kiyono, which began its run in 1976. The television show on Netflix for the most part carefully follows the plot from the original. It also adds extra educational content, such as Nontan and his friends playing with hiragana balls, or learning their ABCs or English vocabulary from a bouncing ball called Bobo. It’s worth noting that some episodes, such as when Nontan needs to be hospitalized and receives an injection and when Nontan angers the mountain and ocean by attempting to send away his little sister, Tatan’s injury, can be scary for the younger preschool crowd. But, overall, watching Nontan can often guarantee laughter and age-appropriate life lessons, like “Otomodachi wa minna takaramono” — all friends are precious — which my daughter has been repeating the last few weeks. Sylvanian Families, launched by Japanese game company Epoch in 1985, began as a line of woodland creature action figures and their dollhouse homes, allegedly created to enthral children growing up in the high-rises of the bubble period. The anthropomorphic critters live in the fictional Sylvania, an idyllic rural town populated by close-knit families and friends. Their adventures have been chronicled in several games and TV shows over the years, with the most recent series from 2017-2019 streamed by Netflix and Amazon. The stars of the franchise are the rabbits, and especially Chocolat Usagi-chan, making it slightly more popular with little girls. Like Nontan, this show offers moral lessons about friendship, family and togetherness, but with less mischief than the former on this list. Sanrio, the company behind Hello Kitty, produces many quality early childhood programs while also hooking a new generation on their adorable characters (and their related merchandise). Hello Kitty’s Parenting Anime, for example, is a show with double benefits for parents: it teaches Japanese and proper manners. Indeed, following Kitty-chan and her sister Mimmy, young kids can learn about dental hygiene (and the scariness of cavities!), helping around the house, answering the phone politely, eating vegetables that may not be your first choice (looking at you, green pepper), cleaning up, and much more. Also appealing from this show are the multiple catchy, oldies that showcase each episode’s theme, which are sure to become family favorites!

This catchy 45-minute show is a great way to practice Japanese hiragana. Hello Kitty and her friends sing and dance to a musical version of the hiragana syllabary, complete with cute storylines, beginning by helping the sad Queen Ant (A-ari) find her Ant Prince (O-Oujisama). My daughter was especially drawn to the Sa-Shi-Su-Se-So song and story with its summery and beachy theme: Sa-Sakana (fish), Shi-Shima (island), Su-Suika (watermelon), Se-Semi (cicada), So-SofutoKuriimu (soft serve). The end of the show also features a game section directed at preschoolers, asking them, for example: which sound is rain? 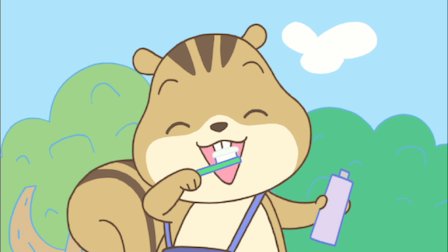 Sanrio makes a third appearance on this list with their Cinnamon anime for young kids. 2008’s Cinnamon no Ouchi de Challenge (“Home Challenge”) is similar to Hello Kitty’s parenting anime in that its purpose is to provide preschoolers with the tools to be polite and productive members of the home. In case your child is more of a dog-lover, meet Cinnamon — a white puppy with a cinnamon-roll-shaped tail and long ears. In this show, Cinnamon and friends (amusingly named Espresso, Cappuccino, and Mocha) learn with your kid about teeth-brushing, taking turns, getting dressed, greetings, and more. The greetings episode left a particular mark on my daughter, who then instructed all in the family how to properly use greetings for particular times of the day and at roll call.

For other Netflix recommendations, see these articles