Japanese TV shows (especially when subtitled) can be a great way to boost your vocabulary and conversation skills. However, on-air TV shows will only get you so far and are a pain to schedule around or remember to record. Enter Netflix. There are subtitles often both in English and Japanese, plenty of programs that go beyond the usual PG-rated fare, and best of all, no long commercial breaks. Here are our top selections for Japanese learners who are looking for an entertaining way to study.

They say laughter is the best medicine — and it also reportedly boosts retention, making it the perfect language learning tool. If toilet humor isn’t quite your bag, then check out the following three shows for some linguistic leveling-up.

Intentionally cheesy, cheaply made, and thoroughly absurd, Yoshihiko is a rare gem of excellent humor on Japanese TV. Innocent and slightly dense Yoshihiko bravely takes on the task of saving his village from a mysterious plague — a mission no-one else wants to attempt. He meets his mostly useless teammates along the way — two of them have vowed to kill him — and together they set forth on a quest set by a nervous Buddha to kill a demon king who is taking over the land. Fantasy and RPG gamers of Dragon Quest and Final Fantasy will recognize a lot of obvious (and badly made) references to both series, but there are plenty of pop culture cameos and borderline plagiaristic appearances to entertain non-gamers as well. First screened on Kansai TV in 2005, this story follows struggling salaryman Kazuma Yamazaki (played by Gori, who made the film Born Bones Born) and his “demon” wife Sanae, who keeps him in line. Their daughter Madoka often sides with her mother, so whenever Kazuma suffers the full furore of his wife’s rage, he’s on his own. The show does some playful digs at old stereotypes, which, while not smashed into oblivion, are at least acknowledged and nudged out of the way. In season 2, Kazuma quits his salaryman job to take over his father’s sento business, leading to new neighborly encounters and domestic troubles.

Difficulty level: Beginner to intermediate. There is a lot of daily language use and very occasional Okinawa-ben in season 2. 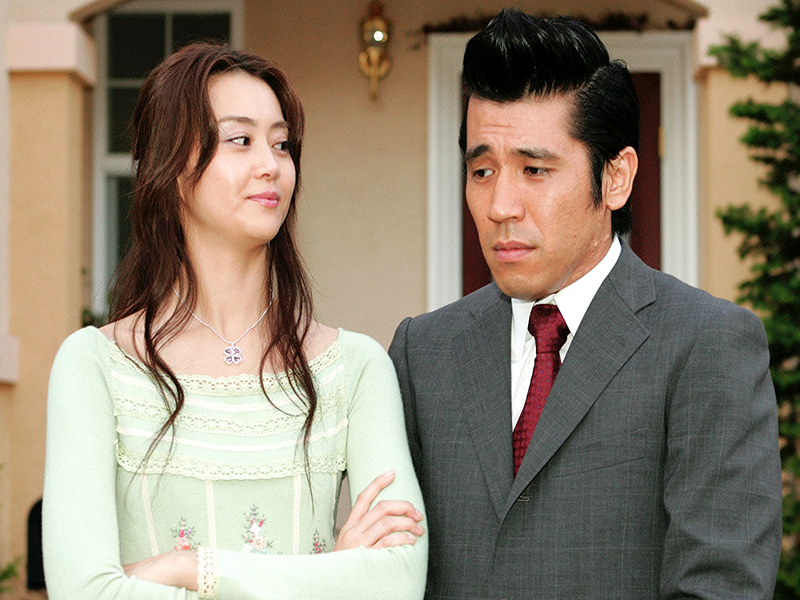 Jimmy is the story of how Jimmy (real name Hideaki Onishi) met legendary comedian Sanma Akashiya, more affectionately known as Sanma-san, in the early 1990s. Back then, Jimmy was a hopeless kid, only good at baseball (but not good enough to continue in high school) and getting in trouble because he couldn’t pick up on subtle social cues. He manages to land a job as a handyman at Osaka’s famed Namba Grand Kagetsu and is invited to take a small role in a short skit that is televised live… it doesn’t end well. Think Forrest Gump, but with more slapstick, some suspect sexual incidents, and no epic encounters outside of Japan’s comedy scene. Supposedly a collection of mostly true stories, it’s both horrifying and humorous, with a healthy helping of awkward. Life’s not all fun and games, and neither is TV. Explore some Netflix original shows as well as some classic TV greats that scratch the surface of the darker side of humanity.

Two girls attend the same school but live in different worlds. The typically cute and popular teen with a loving family is on one end of the spectrum, and on the other is the chubby girl from a broken home with no friends. On a full red moon, somehow they switch bodies. Be warned — this is no happy-go-lucky Freaky Friday with silly misconceptions, nor is it a time-traveling romance like Your Name. This mini-drama in six parts is a dark thriller with several twists — what happens when the person you’ve switched bodies with knows how it happened and doesn’t want to switch back? Based on Shohei Manabe’s manga series of the same name, Ushijima the Loan Shark takes us into the lower reaches of society and the people that scrape their way through life there. Although it’s fiction, the series offers a peek into Tokyo’s sordid underbelly seething with violent loan sharks, pachinko addicts, prostitutes, and fraudsters. Those in need of Ushijima’s services end up paying him back one way or another, whether they have the cash or not. If you’re looking for something dark and gritty, this is it — every single person shows their worst side at some point.

Japanese level: Intermediate to advanced. A lot of slang and jargon. A huge hit when it premiered on Netflix in 2016. Based on an award-winning, semi-autobiographical novella by comedian Naoki Matayoshi (read our interview with him here), this 10-episode series spans across 10 years — one year for every episode — of two manzai comedians’ lives as they struggle to make it big. Equally heartwrenching and heartwarming, it’s a reflective tale of both the cutthroat comedy industry and the agony of the human condition.

Similar shows: The Many Faces of Ito, Underwear, Dad of Light Based on a popular science fiction-thriller manga by Kei Sanbe, this live-action drama adaptation sticks closely to the original story. Satoru is a struggling manga artist who has a special ability that allows him to go back in time to prevent murders and other life-threatening situations. After the murder of his mother, he ends up traveling back in time to 18 years earlier when a series of kidnapping and killings of his classmates haunted the town. Satoru’s ability sends him into the body of his younger self but armed with his adult awareness and knowledge of what transpires, making it possible for him to get close to the source of the killings — unfortunately, it’s not a simple task as the murderer is quick-witted and resourceful. Originally released on TBS in 2011, Midnight Diner gets a reboot with the help of Netflix, this time with the added tagline “Tokyo Stories.” This slow-paced show is set in the heart of Shinjuku, at a small diner only open between midnight and 7am. Each episode centers on one of the customers at the bar, with other diners commentating on their plight as they enjoy a drink and a light meal prepared by the mysterious proprietor, only known as Master. Scripted shows are all well and good, but sometimes it’s nice to experience conversations with a more realistic and natural flow. Here are some of the best variety and reality shows available:

Downtown’s Hitoshi Matsumoto heads a battle of wit around an oval-shaped table. There are only two conditions to the stories they tell: they have to be true, and they have to be funny. Given that all the members are professional comedians, they know how to tell a good story. In some cases, what would be otherwise humdrum tales come to life with well-timed punchlines and clever word usage.

Difficulty level: Intermediate to advanced. There are a fair amount of puns and references to older entertainers, which can be useful for general pop culture info. Good insight into how to tell a good story. London Hearts heartthrob Atsushi Tamura hosts an interview series that takes us into the dark underground of Japan’s sordid side, something not usually shown on “normal” TV. He covers topics from fake brand name items to tattoos in sento baths to “health” sexual services that offer body stretching with a happy ending. It’s great for insight into the seedier side of Japan that isn’t all multi-colored candy floss and squeaky clean idol girls.

Difficulty level: High intermediate to advanced. There is a lot of slang (especially sexual terms), but they usually come with explanations as they are often niche, even for locals. Tamura is at it again, this time hosting a reality TV romance show with a twist: each of the contestants has a “dark secret” that will be revealed at some point during the show. Filmed during a long weekend in a beautiful Okinawan resort hotel, contestants try to find love without knowing each others’ real names or their sins. Will they fall for someone without knowing the other’s secret? Can they overcome the reality of the “sin” to find real love?  How do people react when their secret is revealed in front of the person they’re into? What on earth is an AV magician? You’ll have to watch to find out.

Difficulty level: Intermediate to advanced. Useful for a lot of slang and sexual innuendo. The latest season in the worldwide hit show sees six contestants hanging out in a beautiful two-story house in picturesque Karuizawa, a famous resort area and playground for the rich and famous. Previous seasons have placed participants in the idyllic beachside resorts of Shonan and Hawaii. There’s some drama — mostly imagined by the group of commentators that discuss the housemates’ interactions — but it does offer some insight into how young people talk and interact with each other in an unscripted situation. For some juicy gossip on what really went down in previous seasons of the show, click here.

Difficulty level: Beginner to intermediate. As much as reality shows are looked down upon, TH offers real conversation examples between people of around the same age. Another TV show rebooted from the past for Netflix, this classic love story takes place on the road in foreign lands. First aired on Fuji TV between 1999 and 2009, the original series had 188 participants with a total of eight couples ending up getting married. As of 2018, the pink van is back on the road and starts off in Vietnam with four guys and three girls looking for love. Unlike Terrace House, which features a disproportionate number of models, fancy cars, and a beautiful house, Ai Nori contestants rough it in cheap hostels with shared rooms, and a budget of ¥1,200 a day — they also have to give up their cellphones. If you enjoy Terrace House but want a bit more drama, this is the show for you. Season 2 of the new series is planned for autumn 2018.

Difficulty level: Beginner to intermediate. Like TH, it offers good conversation examples between young people — more so because there are also heated conflicts. Do you have any favorite Japanese shows on Netflix that we haven’t mentioned? Let us know in the comments!