Mixing the koto, a 1,300-year-old Japanese stringed instrument, with contemporary DJ’ing, YY created a unique sound that’s at once upbeat and calming. Although only formed in 2017, they’ve released 25 singles. The goal, say band members Asuka and Wocasi, is to produce a 'festival-like atmosphere through music'

“The koto is an instrument with a fascinating history,” Asuka tells TW. “The shape and style of it hasn’t changed since it was first played all those years ago and I can feel the energy from that period when performing. Both my parents were koto players and my father [Katsuhiko Yoshizaki] was also a composer so it felt natural for me to take it up. When I was at kindergarten, I wrote my wish to be a koto player at Tanabata [the Star Festival]. It’s something that’s always been inside me. I couldn’t imagine doing anything else.” “My background is a bit different from Asuka,” continues DJ Wocasi. “I grew up on a small island in Nagasaki called Hirado and didn’t have much exposure to diverse kinds of music. I enjoyed listening to idols such as Smap, but it wasn’t until I moved to Tokyo at 21 that I really started to appreciate various genres and as a result, my interest in music began to grow. That’s when I decided to start composing some of my own tunes.”

Wocasi went on to create beats for commercials as well as arranging tracks for various artists. Asuka, meanwhile, enhanced her reputation as a koto player by winning the prestigious Miyagi Award (named after the legendary koto player Michio Miyagi) two years in succession. After graduating from Tokyo University of the Arts, she started performing at national events in front of distinguished foreign dignitaries. Though things were going well, she felt she could do even more with the historic instrument by creating a style of music that had never been tried before. YY – A Match Made in Musical Heaven

“I was eager to come up with something groundbreaking,” recalls Asuka. “At university I enjoyed listening to songs with a good beat and I thought it would be interesting to see if I could incorporate some kind of dance music with the sound of the koto. I began searching for someone to arrange the beats and then met Wocasi. She was a guest at one of my live shows and my first impression was that she wasn’t an easy person to interact with, yet there was a genuine spark there. I’m also not good at expressing myself so I felt I could empathize with her and realized immediately we could work together.”

The two women set out to make music that reflected Japanese culture, mainly based around the themes of Zen Buddhism and matsuri (meaning festival). Focusing on the latter, the president of the agency by which they were represented suggested the name YY as the Japanese onomatopoeic phrase “waiwai” evokes an image of a festive social gathering. The fact that the two letters also happened to feature in the pair’s initials (their real names are Asuka Yoshizaki and Yuki) sealed the deal. Their first single, “Rakugan,” debuted in the summer of 2017. Encouraged by the positive feedback the track received, the duo decided to release a new song at the end of every month. “That way fans wouldn’t forget us,” says Asuka, laughing. As well as many original hits, they also reworked Japanese classics such as “Sakura Sakura,” a folk melody about cherry blossoms from the Edo Period, and Miyagi’s “Haru no Umi,” which is frequently played during the New Year holiday season. “We like to release positive songs with a seasonal flavor,” says Asuka. “Sometimes it’s an instrumental piece, other times we incorporate vocals in a style known as jiuta (a classical form of music from the Edo Period initially created by solo performers who sang while playing the shamisen). There’s a good example of this in our track ‘Hana no Miyako.’ For those who’ve never heard our stuff but are interested in listening that would probably be the song I’d suggest they start with.”

“I would recommend our fourth single ‘Y∞Y’ for first-time listeners,” opines Wocasi. “It’s predominantly an instrumental track with some background vocals. Of all our tunes, I think it’s the one that has the most impactful melody. When Asuka and I started doing this together our objective was to show that you can successfully fuse a long-established instrument like the koto with a modern dance-pop sound and I believe this song demonstrates that really well.”

Creating Japanese Music for the Future

This integration of traditional and contemporary cultures can also be seen in YY’s artwork, which accompanies their singles. Illustrator and graphic designer NAGA is the man responsible for the ukiyo-e drawings, which combine his keen interest in the Edo Period with his passion for street art. Discovering his work in a shop in Shibuya, Asuka and Wocasi saw similarities in what they were trying to do and felt they could complement each other. His unique depiction of famous ukiyo-e paintings such as Katsushika Hokusai’s “The Great Wave off Kanagawa” and Kitagawa Utamaro’s portraits of beautiful women can be seen alongside songs such as “Chidori” and “Ramune.”

Changing to a bimonthly format, YY has continued to release singles this year. Covid-19 put their live shows on hold, however they are hoping to play more gigs outside of Japan in the future. Last year they made their overseas debut at the Shrine Lounge, a popular music venue in Harlem, New York. “Of all the live shows we’ve done, that was my favorite,” says Wocasi. “Playing in front of a foreign audience for the first time, we weren’t sure what to expect. The people there didn’t know anything about us but as our set went on, a bigger crowd started to gather. That was a great feeling and it made me realize that it’s true what they say: Music really does transcend boundaries.” “The most memorable gig for me was the Live Pride show we took part in at the Tokyo International Forum last December,” says Asuka. “There were some big names on the bill including Yuming [real name Yumi Matsutoya] who I’d love to collaborate with in the future. It was a great atmosphere and overall a special night for a very powerful cause. It’s something we are passionate about and we stand in full solidarity with the LGBT community.”

“We want our music to be enjoyed by everyone, regardless of gender, race, nationality or sexual orientation,” continues Asuka. “I think it’s now more important than ever to send a positive message and that’s what we aim to do with our music. This is an extremely difficult time for people around the world. I am scared too, but we can get through this. We need to stay strong, work together as a community and always think about others because our actions can have an impact beyond even those around us.”

All photos by Allan Abani 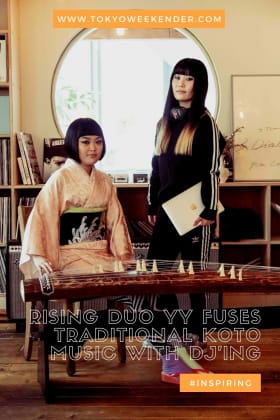