Small, Stained and, Actually, Expensive: Why ‘Abenomask’ Is An Epic Fail

When Japanese Prime Minister Shinzo Abe announced plans to distribute two cloth masks to every household in Japan as part of his COVID-19 relief initiative, many were puzzled as to how to react. “Is that all?” some wondered. Others were grateful — masks were, after all, nowhere to be found. Meanwhile, news about the fast-spreading coronavirus kept us all on alert: we were all at risk and we had to do everything it takes to protect ourselves. But now, about a week after the masks began reaching our homes, the truth about Abe’s masks is being peeled away layer per layer, revealing why this master plan is wrong on so many fronts. 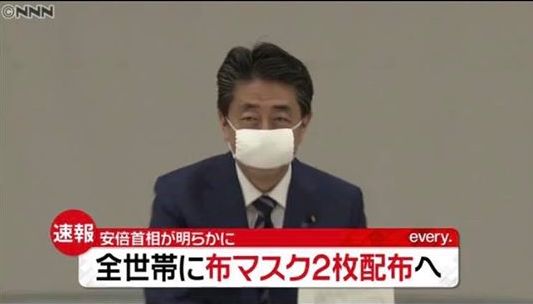 What was the plan and how was it received by the public?

On April 1, as a response to the rapidly spreading COVID-19 crisis, Prime Minister Shinzo Abe announced that the government would distribute two washable cloth masks to every household in the nation. The initiative was supposed to address the shortage of face masks on the market while encouraging the population to wear them to prevent further spread of the deadly virus.

The plan surprised many as it preceded political discussions on financial support to households and businesses in need as the virus continued to affect the majority of Japan’s working population. It also made many with larger families wonder how to distribute the two masks between all family members equitably.

As a result, Abe’s announcement was reported in a flurry of memes and social media posts deriding the idea as a trivial exercise in comparison to cash-handouts and widespread testing rolling out in other nations.

As the public’s negative response increased, the plan even got its own unofficial name on Japan’s social media: “Abenomask” (meaning Abe’s Mask), a play on words inspired by the Prime Minister’s economic policies known as “Abenomics.”

“Many are confused as to the logic behind the initiative as that money could have been further invested in testing patients.”

Despite the unfavorable response, however, mask deliveries kicked off on April 17 in Tokyo. A few days prior to that, the health ministry started distributing around 500,000 masks to pregnant women via municipal offices and medical and nursing facilities. The ultimate plan was to deliver the masks to some 50 million households across the nation by the end of May.

Soon after the initial handout, the Ministry of Health, Labor and Welfare were also quickly inundated with complaints about unsanitary masks, some of which were contaminated with human hair. As the deliveries further started making their appearances in postboxes across the nation’s capital, additional complaints emerged: recipients reported that their masks had been covered in mold, had insects inside, or were stained.

Another common complaint of the masks is that they’re also almost comically small —9.5cm in height and 16.5cm in length, precisely, and much smaller than regular masks as the tweet below points out. If you’ve seen images of Prime Minister Abe sporting one on TV, you’ll notice that they’re like the microkini of face masks, only barely covering the ‘necessary areas.’

We got our #abenomask package today, tho I thought I read somewhere they were recalling them for some reason or another? Whatever tho, this thing is sized for infants anyway pic.twitter.com/jxYgWrZZZk

The complaints became so widespread that two of the four companies contracted to supply the masks, trading house Itochu Corp. and pharmaceutical and medical equipment maker Kowa Co., said they would recall all undelivered masks. The companies confirmed that the masks were sourced from overseas and that they’ll implement more intensive quality-control measures to prevent the issue in the future.

In a press conference on Tuesday, April 21, health minister Katsunobu Kato confirmed that, indeed, a total of 7,870 defective masks were delivered to 143 municipalities.

How much do the masks cost us?

“So what? The masks are given to us for free,” some would argue, suggesting that we should, instead of complaining, be grateful for the gift. A simple search of the hashtag #Abenomask will also result in many social media voices of rejoice over the government initiative. But what these Abenomask defenders are failing to acknowledge is that these unsolicited deliveries are, well, not exactly free. The masks are paid with tax money.

The initial cost for the mask mail-out comes at a taxpayer cost of ¥46.6 billion ($430 million). Of that amount, ¥12.8 billion were allocated as distribution fees, and just over ¥9 billion for manufacturing the masks. Where the rest of the budget went hasn’t been very transparent (the government only revealed the names and commission fees of three of the four companies it contracted to make the masks), but if you do the math, an “Abenomask” set costs us taxpayers about ¥922 ($8.60).

But is it worth it?

As the virus continues to spread, many manufacturers are shifting towards making face masks, and drugstores and supermarkets are now restocking masks daily. This situation, as well as the fact that a face mask made from simple layers of cloth could be pretty easy to craft at home, with the extra time many people now have as the government-imposed self-isolation continues, the entire proposal seems like a colossal waste of money. To add to that, taxpayers are now also paying for the cost of the recall, as well.

Many are confused as to the logic behind the initiative as that money could have been further invested in testing patients. Japan’s testing numbers — like the cloth masks themselves — are comically small. In April, Japan has hit an average of 7,800 tests per day. During the same period, the US has carried out about 150,000 per day, while Italy is testing 50,000 daily.

The whole “Abenomask” campaign is part of a larger emergency package worth over ¥100 trillion, designed to lessen the economic impact of COVID-19. But so far, all it’s seemed to lessen is the population’s trust in government spending.

Have you received your Abenomask? What are your thoughts on this initiative? Let us know in the comments.