Growing up in the Midwest of America you are handed barbecue tongs at a young age. Barbecued burgers, hot dogs and brats are synonymous with American summer holidays, just as Weber grill is synonymous with outdoor barbecue grilling. My dad didn’t say, “Put the steak on the grill.” He said, “Put the steak on the Weber.” That’s why a feeling of family nostalgia welled up when I learned that Weber had opened a barbecue park in Odaiba.

I had the opportunity to check out the location and grill a complete course meal. I anticipated the gorgeous views and mouthwatering grilled meats. What surprised me was that after a lifetime of grilling in the heartland of America, I had to come to Tokyo to take my barbecue skills to the next level. This is just some of the knowledge passed on by the attentive grill tenders at Weber Park: The History of BBQ

George A. Stephen was a part-owner of Weber Bros. Metal Works in Chicago when he took a metal half-sphere the company normally used to make buoys and turned it into a barbecue grill, adding a ventilated lid that controls the smoke and flame. He began selling his new kettle barbecue grill in 1952, a huge improvement over the thin braziers commonly used at the time. The black charcoal grill was an instant success, allowing Stephen to become sole owner of the metal works factory, renaming the company Weber-Stephens Products. Co. Today Weber is the world’s premier manufacturer of charcoal, gas and electric grills and grilling accessories. Last year Weber opened its first-ever barbecue park in Odaiba, creating an outdoor grilling experience that cannot be duplicated anywhere else in the world. It is said that George Stephen’s invention took cooking outdoors. Weber Park’s location on the rooftop of Aqua City Odaiba is breathtaking to say the least. We were able to watch the neon green, pink and blue lights of the cruise ships slowly loll about in the bay below as the purple and red sunset hung over Tokyo Tower and Roppongi Hills. The cherry on top was being able to watch Rainbow Bridge slowly light up as the sun sank down. Sure the view was a little different than my parents’ backyard back home, but the grills were the same, and the price is comparable to Tokyo’s other barbecue parks, if not cheaper. A BBQ Classic for a Reason

Each table at Weber Park comes equipped with two Weber grills: the iconic black kettle grill (which costs an additional ¥1,000) and an easy-to-use gas grill. The gas grill is from Weber’s Q3200 series that has taken off like hotcakes in Australia. The thermometer is built in and regulating temperature of the two burners is a simple turn of the knob. Weber has also introduced a range of low-maintenance, portable grills such as the Q1250 grill that can fit on the balconies of most Tokyo homes. Samples are available to see at the shop on site at Weber Park, or at the Weber Store Aoyama where Weber also hosts its grilling academy for those who truly wish to master the art of the barbecue. At Weber Park, the on-site grilltenders start us up with everything we need, providing directions on how to use the grill and how to cook our first course – nachos. Over the decades Weber experts have devised the perfect grilling methods for just about every scenario imaginable. One of Stephen’s innovations was adding a lid to the barbecue grill, which enables smoke to circulate around the food to give it that iconic smokey flavor. As such, the grill tenders at Weber Park – who offer helpful instruction in English and Japanese – stress keeping the lid of the Weber grill closed while cooking to keep the bountiful flavors inside.

Weber grills are developed to allow outdoor chefs to cook over direct and indirect heat. With direct heat, when the fire’s licks of flame cook the burgers, steaks or chops, you get a seared surface with nice grill marks and caramelization. When cooking with indirect heat, the fire is lit on the sides of the grill with the food placed over the unlit area, good for whole chickens and ribs. A Smorgasbord of Flavors

While our course included the aforementioned nachos, a quesadilla and grilled vegetables, the meat is the star of the show. First things first, the meat must be coated with Italian olive oil, Himalayan pink salt and black pepper from Madagascar, which was all waiting for us on the table. The thick thigh of chicken sourced from Japan should be cooked for seven minutes on both sides. When taking the chicken off the grill, a thermometer is provided to test the inside, which should be 65 to 67 degrees Celsius. Let the chicken rest for about five minutes so you don’t lose all of the juices when slicing. The Australian rump steak is delivered fresh daily from the butcher. Cook the steak for about 90 seconds on both sides and check the temperature. If you like a medium steak, the temperature should be between 57 to 62 degrees Celsius. The grill tenders at Weber Park are conscientious about health and safety, especially when dealing with ingredients such as chicken. To avoid cross-contamination, a silver set of tongs is provided to handle anything that could cause potential health issues, such as raw chicken, or shrimp for those with allergies. A Weber-branded black pair of tongs is provided to handle cooked meat. While it is okay to eat steak at any temperature, it is important to use the thermometer to test the chicken to ensure no one eats it raw. Also, be sure to use the grill brush to clean the cooking grates between courses. One thing we never did back home was cook dessert over a barbecue grill, but at Weber Park we were handed two ramekins filled with chocolate brownie batter. We baked these delights for 20 minutes inside the grill (rotating 180 degrees at the halfway point) and stuck in our toothpick to see if any raw dough clung to it. With a calm breeze blowing in from the bay, we were able to enjoy moist brownies while taking in a stunning night view of Tokyo. The full bar mere steps away helped as well.

Weber Park offers multiple courses to match your desires, whether you are bringing the family or organizing a business outing. For ¥2,000 per person, Weber will provide the space, grill, grilling utensils and guidance from the grill tender for a perfect grilling experience, while you bring food of your choice. Drinks are also available a la carte and in two-hour all-you-can-drink packages.

Between America, Japan and the rest of the world, one thing that is universal is that the barbecue is a time to relax with family and friends. From Chicago to Tokyo, Weber Park is creating lifelong memories no matter where you picked up your first set of barbecue tongs.

Join the TW Insider’s Club by September 26, 2019 for a chance to win 2 free meals at Weber Park or 1 free meal when reserving for 3 people or more.

Make an online reservation at Weber Park by visiting the website or using the QR code: 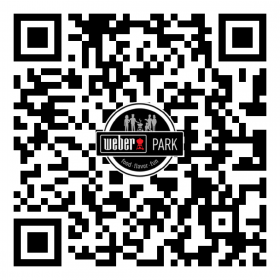