Never tried the sport before? This is how to wing it.

The bus pulled away from the curb just as I stepped out of Kumatori Station. I stood and watched as it disappeared down the road. Scanning the infrequent bus schedule, I resigned myself to arriving late at Tono Air Hang Gliding School for my first hang gliding flight in Japan. As I considered my limited options, I was surprised to see a young man waving at me from the bus stop bench. “Tono Air?” he inquired. At my nod, he identified himself as a hang glider pilot. He had heard that a foreign pilot would be coming today, making it easy for him to guess who I was. He then offered me a ride to the school, which I gratefully accepted, reflecting not only on my luck but on how very much at home I felt. I had experienced American pilots’ generosity in offering any peer a ride to flying sites; now I knew that pilots in Japan were no different.

As a hang glider pilot for over five years in the US, I hoped to continue my favorite hobby while teaching English on the JET Program. Initially unfamiliar with the sport’s presence in Japan, I discovered that the first hang gliding school opened in Japan in 1975, around the same time the sport was enjoying its peak popularity in America. A few years later, in 1981, Japan hosted the world championships in Beppu. Japan now has approximately 25 hang gliding schools across the country, including local clubs. The Japan Hang & Paragliding Federation (JHF), originally founded as the Japan Hang Gliding Committee in 1978, manages the sport in Japan much as the United States Hang Gliding and Paragliding Association (USHPA) does in the US. The JHF’s role includes issuing pilot certifications, regulating instructor training, conducting safety investigations, and organizing competitions. In spite of my interest in hang gliding in Japan, anxiety held me back. Besides finding a nearby school, I wondered, would they have equipment that I could rent, suitable for my skill level and weight? Would my limited Japanese combined with gestures be sufficient to comprehend the technical language of flying and weather? (How does one say “turbulence” in Japanese, anyway? Taabyurensu? …No?) Was passing another glider on the right internationally standardized, or did the Japanese pass on the left as when driving, potentially putting me at risk of a collision? Finally giving in to my desire to fly, I emailed Tono Air, which is located in Wakayama Prefecture. I decided to book a tandem flight, both to give me an understanding of flying in Japan and to allow the instructor to assess my skills.

Following my altered transportation plans, the rest of that first day went well. I met the school’s owner, Yoshikatsu Tonomura (known as Tonoyan), along with his wife, Michiyo, and several other pilots. After selecting a harness and helmet and loading the gliders onto the car’s custom hang gliding rack, we drove up an especially steep, winding mountain road. The thick mat of leaves covering the pavement gave an impression of slipperiness just waiting to send our top-heavy van skating into the trees. Michiyo sang the “Indiana Jones” theme song while Tonoyan nonchalantly informed me of several cars that had slid off the icy road in previous winters. As with many flying sites, enduring the drive up meant overcoming the most nerve-wracking part of the day.

Arriving at a cleared area 600 m (1,970 ft) up Mt. Ryumon, I once again felt at home. The pilots were all easygoing, similar to the relaxed attitude among US pilots. With the aid of diagrams drawn in the dirt, I also confirmed that hang gliders in Japan do indeed pass on the right. One detail in particular, however, reminded me that I was in Japan – while US pilots typically focus on unloading their own gliders from the truck, the Japanese pilots worked together to unload every glider, stacking them on the ground for individual retrieval.

Our tandem went well, clearing me to rent a glider and enjoy another flight that same afternoon. Having successfully entered the world of hang gliding in Japan, I ended up returning once a month on average, adding to the wonderful memories of my remaining time in Kobe. Soon, I became part of the online chat group for the flight park, and “my” harness was tagged with my name. Pilots frequently offered me rides back to Kumatori Station, Osaka, or once all the way home to Kobe, enhancing my sense of belonging to the community. 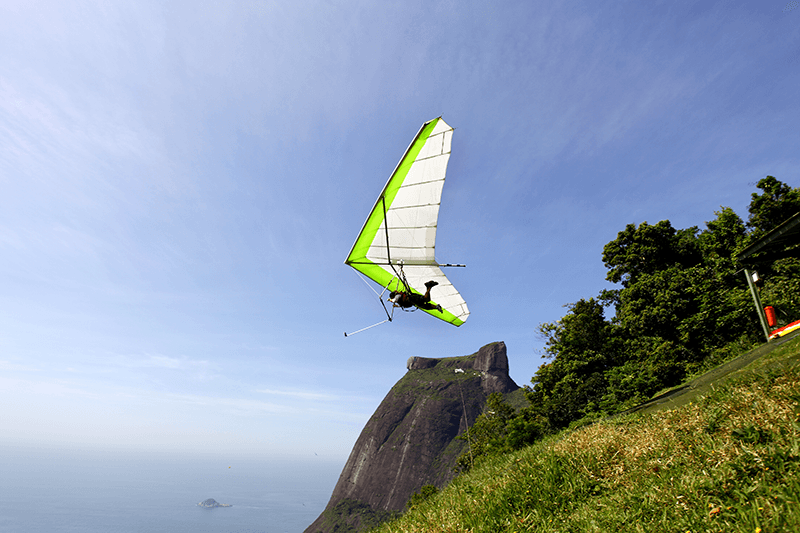 My most memorable flight happened one Sunday morning in 2015. The day’s favorable weather conditions granted me my longest and highest flight in Japan. Soaring for over an hour, I climbed more than 180 m (600 ft) above the launch point, carefully avoiding the tree tops as I thermaled to the top of the ridge.

There I hovered, floating back and forth, enjoying views from above Japan’s forest-covered slopes, farm- and greenhouse-spotted valley, and curved metal bridges spanning the river. Eventually, gliding down over the orchards and tractors, I caught sight of the large kanji characters painted on the side of a building serving as a landmark for the landing area, and joined my fellow pilots on the ground.

Where To Go Hang Gliding in Japan

Oshino Sky Sports Club, located in Yamanashi Prefecture at the base of Mt. Fuji, is less than two hours from Tokyo by car and offers hang gliding tandem flights. Other schools in Tokyo’s vicinity include Sky Trial in Tochigi Prefecture, and Birdnest.Tokyo in Ibaraki Prefecture, which offers hang gliding tandems and instruction in Japanese, Spanish, and English. Hang gliding is fun, relatively simple, generally safe, and, contrary to popular perception, very calm and relaxing. With the hang gliding season starting in spring and running through the fall for most sites, it’s the perfect time to experience a unique yet internationally connected community, while seeing Japan from an entirely new angle.

For more info, visit The Japan Hang & Paragliding Federation’s website, which lists sites and schools by region in both Japanese and English: jhf.hangpara.or.jp/area/index_eng.html