Based on Haro Aso’s manga of the same name, Alice in Borderland proved a huge ratings success both at home and abroad when it premiered on Netflix two years ago. The Shinsuke Sato-directed dystopian thriller, which features a series of perilous survival games in a parallel Tokyo, made a big impression on viewers from the outset and went on to rank in the top 10 most watched Netflix shows in more than 70 territories. On Christmas Eve 2020, just two weeks after first airing, a second season was commissioned.

With the debut series covering 31 of the manga’s 64 chapters, it will be interesting to see how deep the second one goes. Fans have been eagerly awaiting the next installment of the show, slated to begin on December 22. So, what can we expect from the new season? Tokyo Weekender recently spoke with female lead Tao Tsuchiya to find out. She plays Yuzuha Usagi, a skilled mountaineer who has the physical and mental strength to battle through the games. “I think one of the main differences between this season and the previous one is that the characters have become more expressive in their emotions,” Tsuchiya tells us. “Also, until now, the games have taken place in locations that are easy to imagine, such as apartments and tunnels. This time, the setting is an imaginative virtual world that’s out of the ordinary. To make this extraordinary world appear as reality, the CG effects and scale of the games have gone up another level. I feel this will make it even more appealing for the audience.”

The Alice in Borderland story begins with Ryohei Arisu (Kento Yamazaki) and his two best friends, Chota Segawa (Yuki Morinaga) and Daikichi Karube (Keita Machida), fleeing to a Shibuya Station restroom after an altercation. When the trio emerge from the toilet cubicle, they find the city has been completely deserted. They are then thrown into the “Borderland,” which means playing games of life and death. In the second game, they’re joined by Usagi, the daughter of a famous mountain climber who took his own life after being accused of faking a hike on Mount Everest.

“Usagi deeply respected her father and believes society has stolen him from her,” says Tsuchiya. “The sense of loss and loneliness she feels because of his death draws her into the Borderland, where she uses her skills to survive. The grief she feels, however, means there’s a real distance between herself and the others in the game. That distance gradually begins to narrow after meeting Arisu. She’s concerned about him, and he slowly opens the door to her heart. It’s akin to a first love for her.”

An aloof character to begin with, Usagi comes out of her shell as the first season progresses. She becomes a key player in the games due to her agility and endurance. Tsuchiya was, therefore, the obvious choice for the role. Like her character, she’s an athletic individual known for her dance skills in classical ballet and hip hop, and for taking part in various sports, including basketball and track and field. Unlike Usagi, though, she says she’s not calm under pressure.

“To prepare for the part, I initially did lots of rock climbing,” recalls Tsuchiya. “For season two, the training was then more action-focused. Usagi needs to fight, but hasn’t learned martial arts, so her style doesn’t have much technique. She needs to punch like this [gestures punching forward with one fist] but she also can’t look weak. She hasn’t had to fight before, so I practiced working on my defense.

“In season two, I feel we start to witness Usagi’s weaknesses and self-doubt creep to the surface,” continues Tsuchiya. “Before she was pushing Arisu forward, yet, this time, she’s the one questioning whether she genuinely wants to go back to the real world. Perhaps she’s fearful of returning. Participating in the games becomes like a test for her to see if she can overcome this lack of trust that she has in herself. You can feel her turmoil and see her growth in this series.” Fans of the show will be eager to find out how the relationship between Arisu and Usagi develops. There’s a chemistry between the two, as Yamazaki and Tsuchiya play off each other very well. The pair first appeared together as a married couple in the 2015 NHK asadora (morning drama TV series) Mare, with Tsuchiya beating off competition from over 2,200 women to land the lead role. Later that year, Yamazaki was again her love interest in the teen fantasy flick Orange, a film for which they both won Newcomer of the Year prizes at the 39th Japan Academy Awards. She describes her co-star as a “fantastic actor,” who’s “perfect for the part of Arisu.”

Alongside the two leading actors, new members are set to join for the second series to take on more difficult challenges, including Yuri Tsunematsu as high school student Heiya and former Johnny’s singer Tomohisa Yamashita as “King of Clubs” Kyuma. Fellow survivors from the opening series will also return, such as Nijiro Murakami as the ingenious medical student Shuntaro Chishiya, Ayaka Miyoshi as the skilled forensic scientist Ann Rizuna and Riisa Naka as the mysterious Mira Kano, who was revealed as the Game Master at the end of season one.

“As many of the characters had already been developed from the first series, there was a calmer feeling on set the second time around,” says Tsuchiya. “Back at the start, we were all focused on playing our roles, and I felt there was a sense of uneasiness and impatience among the cast. This time we went into it with that little bit more experience, and perhaps we’ve become better at balancing work with our private lives. It was fun chatting and finding out about everyone’s hobbies in between shooting.” Away from movie and drama sets, Tsuchiya is known to be very active. As well as dancing and keeping fit, she also plays instruments, such as the shamisen and piano. In 2015, she penned the lyrics for “Marezora,” the opening theme song for Mare, and two years later released her first single, “Felicies,” which featured on the dubbed version of the animated adventure comedy Ballerina. Tracks since have included “Anniversary” with Dish singer Takumi Kitamura, “Umbrella,” “Lead Your Friends,” and “You Got Friends.” Earlier this year, she sang on “Rules,” a song by Suchmos guitarist Taiking.

Though Tsuchiya is receiving increased attention for her music, it’s her acting skills for which she is most well-known. She first dreamed of appearing in movies after watching the fantasy romance flick Edward Scissorhands, starring Johnny Depp, and she went on to appear in school plays. Yet something wasn’t right — she struggled to pronounce certain words. After visiting a doctor, she was diagnosed with ankyloglossia, also known as tongue-tie. At 16, she underwent an operation to remove part of her tongue, which had a big impact on her life and career.

Tsuchiya’s condition has never stopped her from aiming high. She made her film debut at the age of 13, appearing in Kiyoshi Kurosawa’s stirring family drama Tokyo Sonata, the jury prize-winner of the Un Certain Regard section at the 2008 Cannes Film Festival. She would go on to establish herself as one of the most sought-after actors in Japan, regularly landing leading roles. Though often cast as an innocent school student, the versatile actor is equally adept playing an action hero, as seen in the popular Rurouni Kenshin film series, or performing as a more sinister character, as was the case in The Cinderella Addiction. 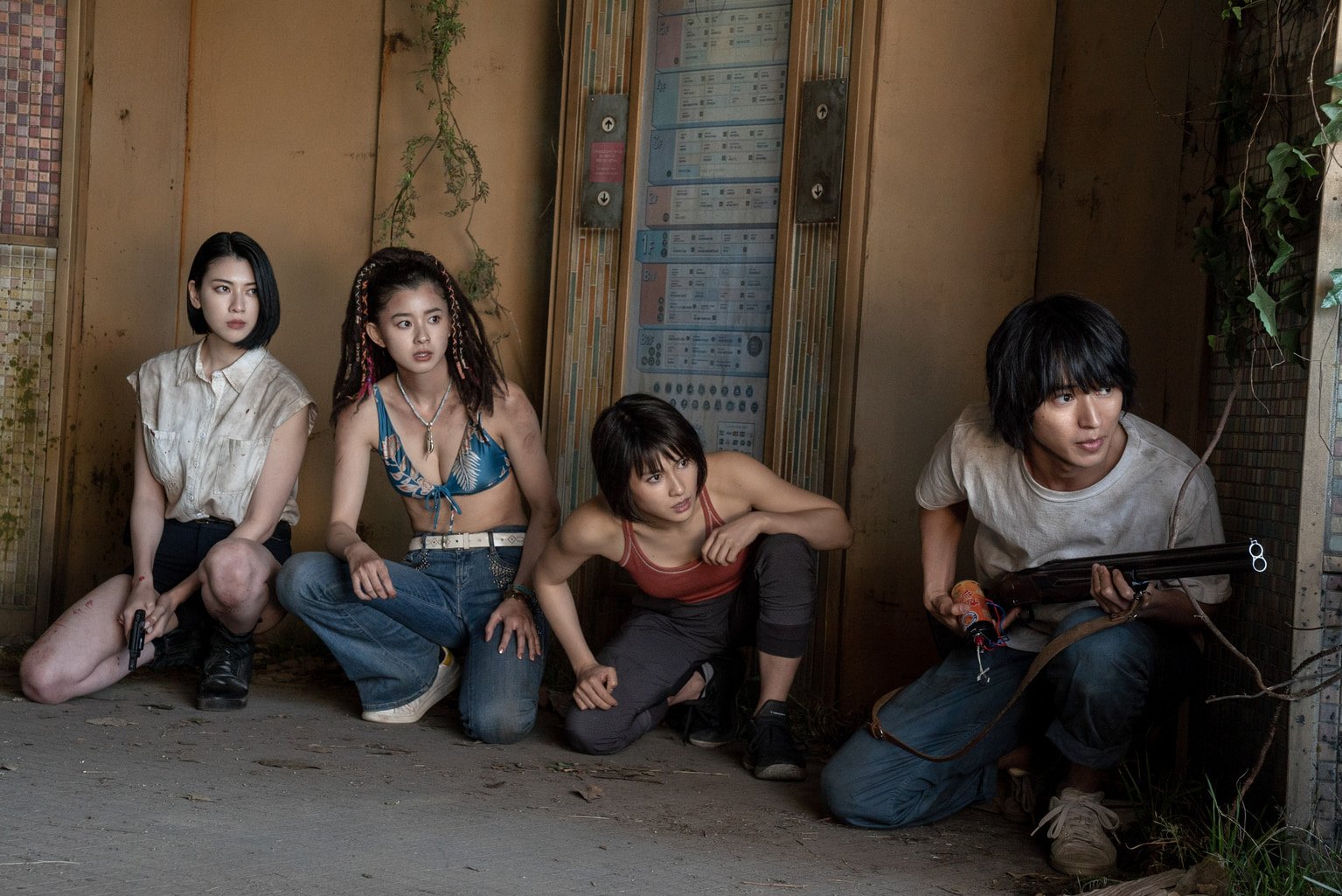 Developing as an Actor

When she started off, Tsuchiya says her focus was simply to “immerse” herself in any role she took on, whereas these days she looks more at the bigger picture. She thinks about her own visual effects, such as how big a wound should be or how much blood should pour out. Being able to discuss these kinds of things with directors and makeup artists has, she feels, helped her develop as an actor. Despite being in the industry for almost 15 years, she still sees herself as a student, constantly learning and striving to improve.

Mature beyond her 27 years, Tsuchiya is a charming individual with a large fan base that has expanded beyond Japan in recent years. As a result, there has been a notable increase in messages from overseas fans on her Instagram page, sometimes in languages she admits she had never previously seen before. This is largely down to the success of Alice in Borderland and the Japanese video for Sia’s number one hit “Alive.” Donning a Sia-style wig, Tsuchiya made quite an impression with her aggressive dance routine.

“I’ve been fortunate in the fact that I’ve been able to pursue both acting and dancing in my career,” she says. “Next year, I’ll be dancing on stage. I want to express my emotions through my body and feel that emotion in my bones. I hope I can express this feeling to the audience, so they can feel it in their bones too. It’s one of the things I’m most excited about for 2023.”

There’s plenty for Tsuchiya to look forward to before then, though — most notably the premiere of Alice in Borderland: Season 2 this December.