How a chef, baker and coffee roaster came together to create a unique establishment 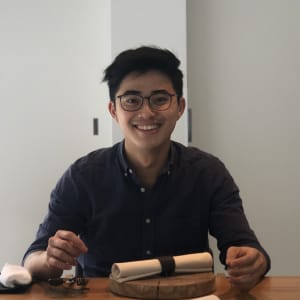 Bricolage Bread & Co. doesn’t fit neatly in one category of establishments. It’s an amalgamation of a French bakery, a French restaurant and a Norwegian café. Behind the scenes are head chef Shinobu Namae of restaurant L’Effervescence, baker Ayumu Iwanaga of Le Sucré-Coeur and coffee roaster Kenji Kojima of Fuglen Tokyo. All three artisans were famous in their own right before coming together to create Bricolage. So, how and why did this trio come together? Tokyo Weekender spoke to chef Namae to find out.

After the 2011 Tohoku earthquake and tsunami, Namae traveled to the region to help with a disaster relief project. He was supplying hamburgers in a white sauce alongside another collaborator of the project, Iwanaga, who was offering his bright red beetroot bread. While they didn’t know each other too well, they shared the same passion and goals. Seven years later, the two men established Bricolage with Kojima.

A mixture of open-face sandwiches (tartines), a selection of delicious pastries and bread as well as refreshing light roasted coffee can all be enjoyed inside the store, which is also split into three spaces — a bakery, a café stand and a restaurant. Namae is the chief owner of the establishment, with Iwanaga and Kojima joining as collaborators in charge of the coffee and bakery.

After 2011, many began to see how important it was to support local producers. This caused a shift in the culinary scene in Japan, with more organic produce and so-called “farm-to-table” philosophies implemented. This is a core ideology in the DNA of Bricolage, too. Staff members often visit producers around the country from Bocchi Peanuts in Chiba to Tokapuchi Farm in Hokkaido to learn about the produce and people they are working with. Finding a Place in Roppongi

Namae says it was a challenge to balance the high-end style of Roppongi with his vision of comfort and relaxation. He decided to use the materials of a 100-year-old building from Fukui Prefecture that was about to be demolished to construct the establishment’s building in Roppongi. “Bricolage” is the French word for “do it yourself.”

The open-style interior was a marriage of East and West. Chez Panisse in San Francisco was a key inspiration for the design, connecting the kitchen with the dining room. The result is a tranquil oasis within the hustle and bustle of Roppongi. It’s supposed to be a bit like your grandparents’ house. Every aspect of the store is deliberate, from the individually handcrafted cutlery from Mashiko, a town in Tochigi Prefecture, to the thick glass bowls hinting at the Showa Era. All of these concepts along with Namae’s core philosophies contribute to the warm and inviting atmosphere of Bricolage Namae’s culinary journey started as a part-time dishwasher in a local Italian chain restaurant during his college years. After graduating from Keio University, he pursued that culinary interest, which led him to work at Michel Bras Toya Japon in Hokkaido and then at world-renowned Heston Blumenthal’s The Fat Duck. Now, head chef of 3-star Michelin restaurant L’effervesence, he has firmly established himself in the culinary world.

At the forefront of his cooking philosophy is the concept of sustainability and connecting and supporting local producers. In 2018, L’effervesence was the first winner of the Sustainable Restaurant Award at Asia’s 50 Best Restaurants.

While Namae’s food at L’effervesence offers sophisticated cuisine, Bricolage is focused on being a sustainable practice that the staff and customers can participate in. Bricolage is a place to relax and enjoy while also learning about the dishes. Domestic ingredients such as wheat and rye from Hokkaido and spelt flour from Shiga are at the core of the bakery’s concept. Iwanaga has learned how being a baker is not just about bread, but a harmony between being a baker and chef. Training in Japan and in Paris, he gained invaluable insights from legends, Éric Kayser and Alain Ducasse. Iwanaga then went on to set up his own boulangerie, Le Sucré-Coeur in Osaka.

The synergy between both Namae and Iwanaga was instant. They shared the same passion for looking after and protecting local producers. While visiting the producers in person, Iwanaga gained insight into the people, the fields and the soil, and felt a connection to keep things as pure as possible. Thus came the decision to use whole-wheat flour to make use of the whole wheat kernel.

While the bread at Iwanaga’s flagship store in Osaka has a strong and bold aroma, in Bricolage, it’s gentler. He says that using whole wheat is not a style of Bricolage but an understanding of domestic ingredients. Kojima was the final addition to the collaboration. He had an interest in coffee from his youth, even working at a kissatten at the age of 20. However, after working as a manager at an izakaya in Saitama, the stress and long hours took their toll on his health. Kojima decided to pursue his passion for coffee as a career change and went all the way to Norway to learn.

Now, he is the manager of Fuglen Coffee in Tokyo, serving Nordic-style roasted coffee. Namae frequently visited Fuglen to enjoy the lightly roasted, fruity beverages. The appreciation for the taste as well as Kojima’s philosophy meant that it was only natural that they partnered and collaborated to make Bricolage.

Kojima believes service to his customers is the most important part of being a barista and coffee roaster. He says that he can’t make flavor as the coffee already has that. His job is just to find the best way to extract those flavors. He goes on to add that the service, the atmosphere and the music all contribute to the taste of the coffee. The vision of Bricolage is to revolutionize the way we eat. It’s not just a bakery or a coffee shop, but also a lesson in the importance of supporting local producers and ingredients. The ever-evolving culinary scene leads to continuous learning and innovation. Through connections from chefs to customers and producers, Bricolage is also evolving. As are Namae, Iwanaga and Kojima.