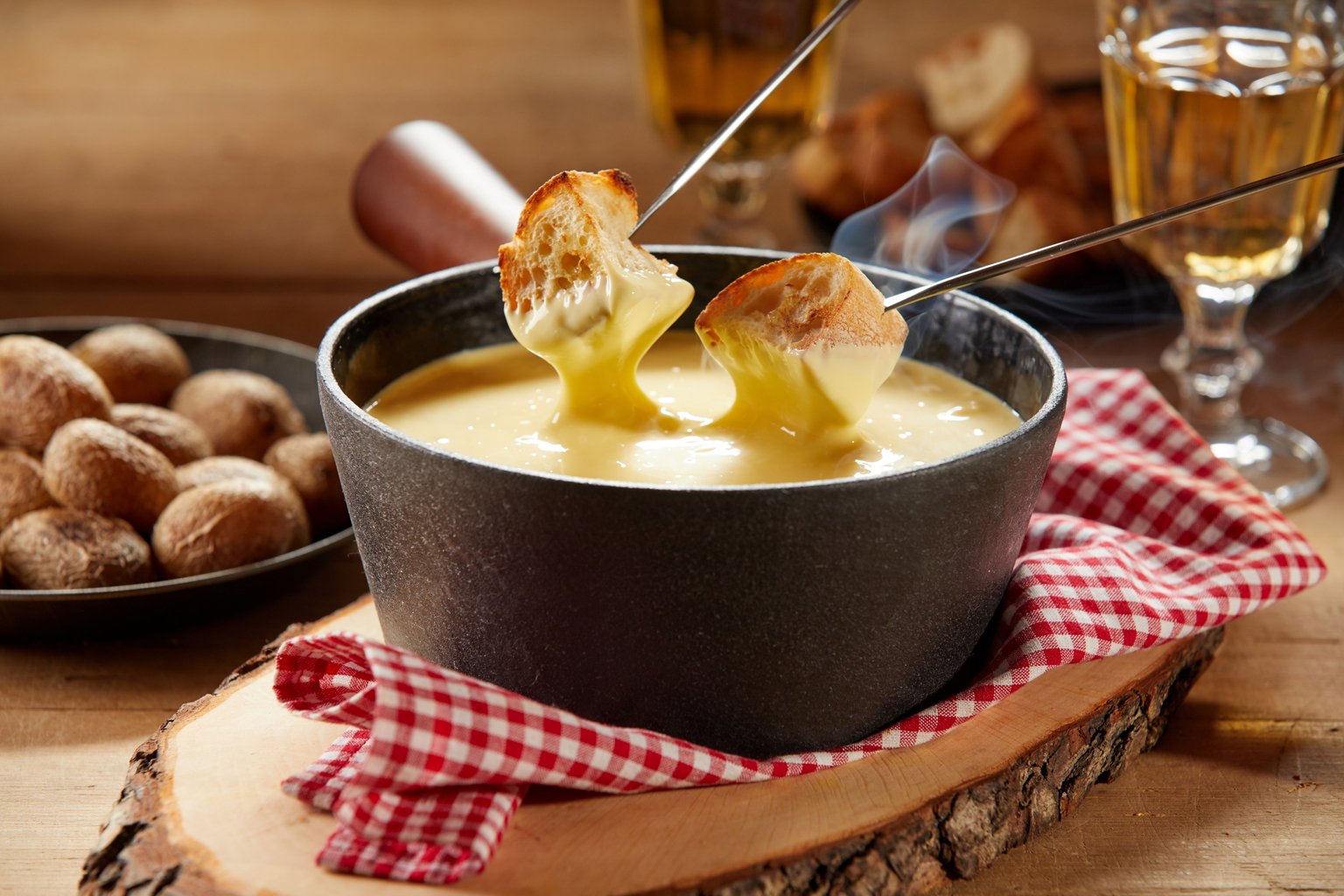 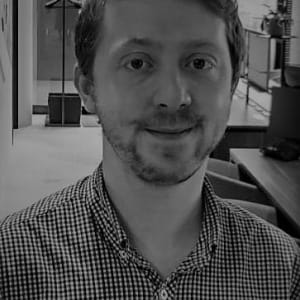 Venture into Tokyo Swiss Inn and you’ll immediately be tickled in the nostrils by the unmistakable aroma of cheese. While residing in an inconspicuous building in the glow of Tokyo Tower, the conspicuous Swiss flag flying outside makes it hard to miss. Descend a short flight of stairs and you’ll enter an intimately crafted environment evoking an atmosphere of continental elegance.

Situated a short four-minute walk from Akabanebashi Station on the Oedo Line, the restaurant’s storied history stretches back for more than half a century. They initially opened in Roppongi in 1965, before relocating a short distance to nearby Higashiazabu three decades later. Taking pride in this long tradition of satisfying a unique culinary niche that cannot be easily accessed elsewhere in the city, the staff aim to provide an experience of unparalleled alpine delight. The walls are adorned with art and advertisements that evoke the Swiss countryside. This is in conjunction with a lively folk musical backdrop. There’s virtually nothing comparable to be found anywhere in Tokyo. 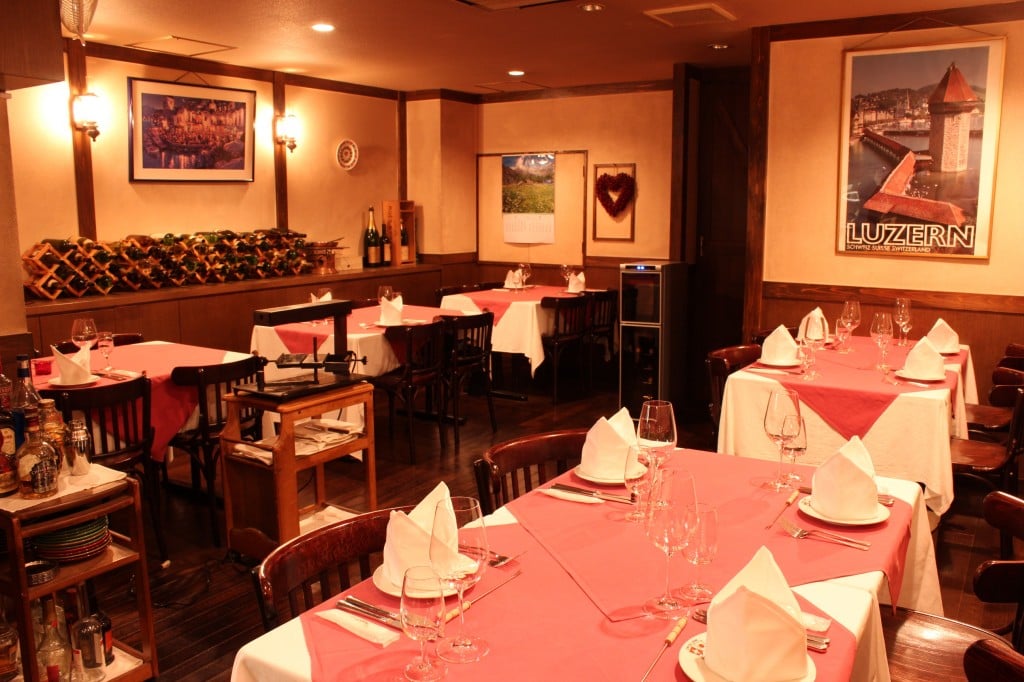 Japan BC (Before Cheese)

Switzerland and its dairy products are iconic, but cheese and Japan have a relatively short history together. During the Meiji Period, the country’s government began a drive to broaden the national palate. It was an attempt to refine cultural tastes with an infusion of dairy into the Japanese diet. This zealous endeavor resulted in the establishment of longstanding institutions like Koiwai Farm, as well as the gradual appearance of dedicated cheese sections in upscale grocery stores. Yet it wasn’t until the economic boom in the 20th century that ordinary people began to embrace cheese. It was in this climate that Tokyo Swiss Inn was able to find its footing. Diners can begin with an assortment of authentic hors d’oeuvres. These include escargot liberally slathered with garlic butter, meticulously marinated smoked salmon and the restaurant’s signature special salad containing fresh vegetables and mushrooms drizzled with oil and vinegar. Other salads of the tomato and even sausage variety are on hand as well. There’s also melon et jambon cru, in which dried ham is served with juicy honey melon; an unexpected match made in heaven. For a more substantial opening bite, consider ordering the poached shrimp.

One appetizer that is a must is the ramequins au fromage. It consists of a petite tart packed full of hard Swiss Gruyère cheese, cream and egg. 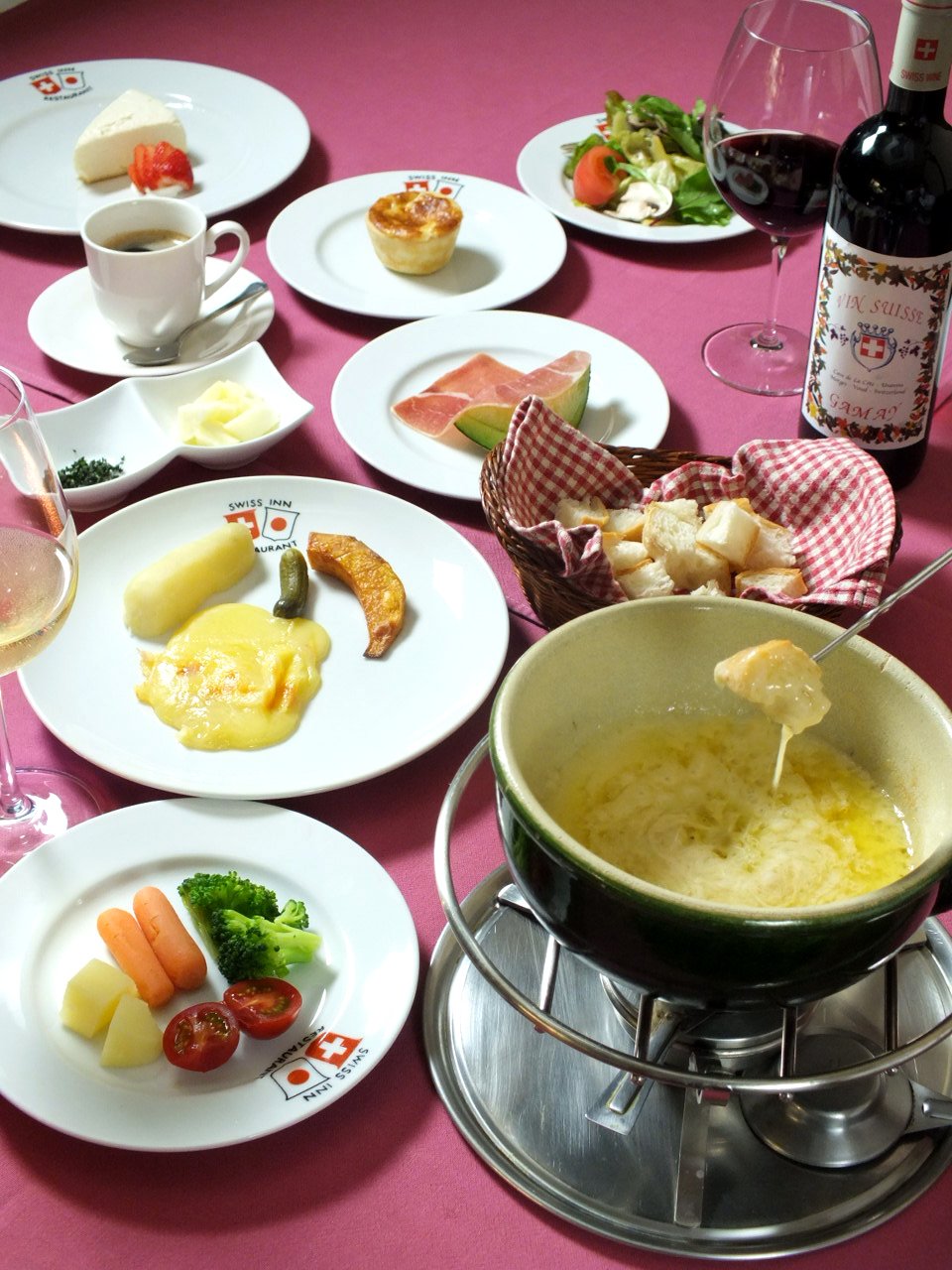 Fondue, in several different manifestations, plays a prominent role in the heart of the menu. This may be in the form of the aforementioned Gruyère, which is served in white wine fused with a popular colorless regional brandy known as kirsch, or in the guise of Fondue Bourguignonne. This latter version involves a fondue pot filled with hot oil which diners use to cook pieces of meat with, alongside an array of delectable sauces. They are available in either 150g or 100g sized portions depending on the size of your party and appetite. You certainly can’t go wrong either way.

You may opt to check out another Swiss favorite, raclette, which involves melting cheese and scraping it across a mix of vegetables. From potatoes to pickles and pumpkin, it creates a thoroughly filling and satisfying meal.

Both fondue and raclette have been continuously present on Swiss tables for centuries, and the restaurant does an admirable job in bringing them to the other side of the world. Desserts are nothing short of a treat for both the eyes and taste buds. Treat yourself to Poire belle Hélène, daintily composed of pears, vanilla ice cream and hot chocolate syrup. The sherbet, vanilla bean ice cream and cheesecake are likewise all expectedly satisfying and presented immaculately. But it’s the chocolate fondue and its accompanying fresh fruit that easily steals the show. There’s a certain novelty value to the whole experience, aside from the great taste. The quality of imported wine on offer is unsurprisingly excellent. Fruity Genevan Chasselas and dry Pinot Noir from the Canton of Valais will take you on a taste tour of Switzerland’s finest vineyards. Tokyo Swiss Inn allows itself to cross the southern border to Piedmont by presenting Barolo, considered by some to be Italy’s most magnificent wine. Bottles of Swiss beer provide an alternative manner of alcoholic refreshment. And you can end the meal with an eye-opening espresso.

A belly full of cheese and wine may make the short ascent up the stairs upon exiting Tokyo Swiss Inn seem like scaling the Matterhorn. But you’ll leave yodeling the restaurant’s praises.