Regular readers of TW will be more than familiar with the name Kodo Nishimura. Our June 2020 cover star, the gender-fluid Buddhist monk and makeup artist has burst into the spotlight over the last year or so after starring in the hit TV series Queer Eye: We’re in Japan. A real inspiration for Japan’s LGBTQ community, Nishimura sensitively combines his love of makeup and fashion with the profound teachings inherent in Buddhism. Nishimura is releasing his debut English book This Monk Wears Heels: Be Who You Are which is already set to become a best-seller and will also be published in German and French later this year.

As The Tokyo Metropolitan Government announced plans to introduce a same-sex partnership system starting in April, TW spoke with Nishimura about his new book, how his life has changed in recent years and how the fight for gender equality and societal acceptance is changing in Japan.

You were our cover star in June last year. What was that like?

Actually, the CEO of Shu Uemura picked up a copy of that issue of TW and they chose me as a foundation model! Since then I’ve worked with them four times. I did an internal LGBTQ seminar and modeled for three of their projects already. It’s all thanks to TW! It’s coming out on February 8. And actually writing a book was always my big dream. I always made sure I noted my learnings or topics or stories I want to introduce in my book since I was very young. Especially when I was in monk training and thinking about publishing a book, I always took notes of lessons I wanted to write about. So basically it started from such an early age. When I was in university I read a lot of books, especially about health and self-help. There weren’t many LGBTQ people writing books about how to find confidence in ourselves. Regardless of discrimination or ignorance. I wanted to write a book to help people from around the world because I know that people are still suppressed and oppressed with religious values or culture. I don’t want to change or convert anybody to Buddhism. I don’t think Buddhism is better or worse than anything else. It’s like learning the diverse colors, there’s no better or worse. It’s nice to know that yellow and purple exist or that gold exists. It’s not just blue or red.

You spoke in previous interviews about being gender fluid and that you use he/him pronouns. Could you explain more about this?

Well, I used to think I was gay. Because I was a male person who finds other males attractive. But when I was reading about the descripton of what gay means it says that a male person loves another male. I know my body is male but I don’t know if my soul is fully male. Sometimes I feel very feminine too. I like to play with makeup and heels. Am I still a man? I don’t know. So I chose the term “gender gifted.” I feel that being able to think beyond male or female is a gift. I can liberate people from this. We have a container of male and female. We tend to install a lifestyle or ways of thinking as a male or as a woman. But actually it’s just a container. Think about Windows or Mac. Even if you use a Mac computer, you can still operate Windows. It is not typical, but it’s not impossible. We don’t necessarily have to live as others do. You can live in many different ways. And it’s my gift to liberate people from living a stereotypical lifestyle. I read that the book is aimed at people who don’t fit in or feel that they don’t fit in. Could you tell us more about that?

Yes, actually many people can feel that they don’t fit in. Not just sexual minorities. You might travel to a different country. For example you are living in Japan but are Scottish, so you might not share the same background. In the book, I talk about how we have to be our own cheerleader, when you are different from others. Also it is common for people to want to conform with the majority, being afraid of isolation. Everybody is unique. So in these cases I want people to find enough information to back up their unique ideas and to be comfortable enough to talk about their sincere emotions. If you suppress your emotions and bear your honest feelings too much you are going to end up harming others because you’re not happy.

How would you categorize This Monk Wears Heels?

It’s a self-help book that talks about my journey to find confidence in our unique beings. I share vulnerable stories that I wanted to hide because I am a monk, hoping to encourage others to live as their authentic selves too. 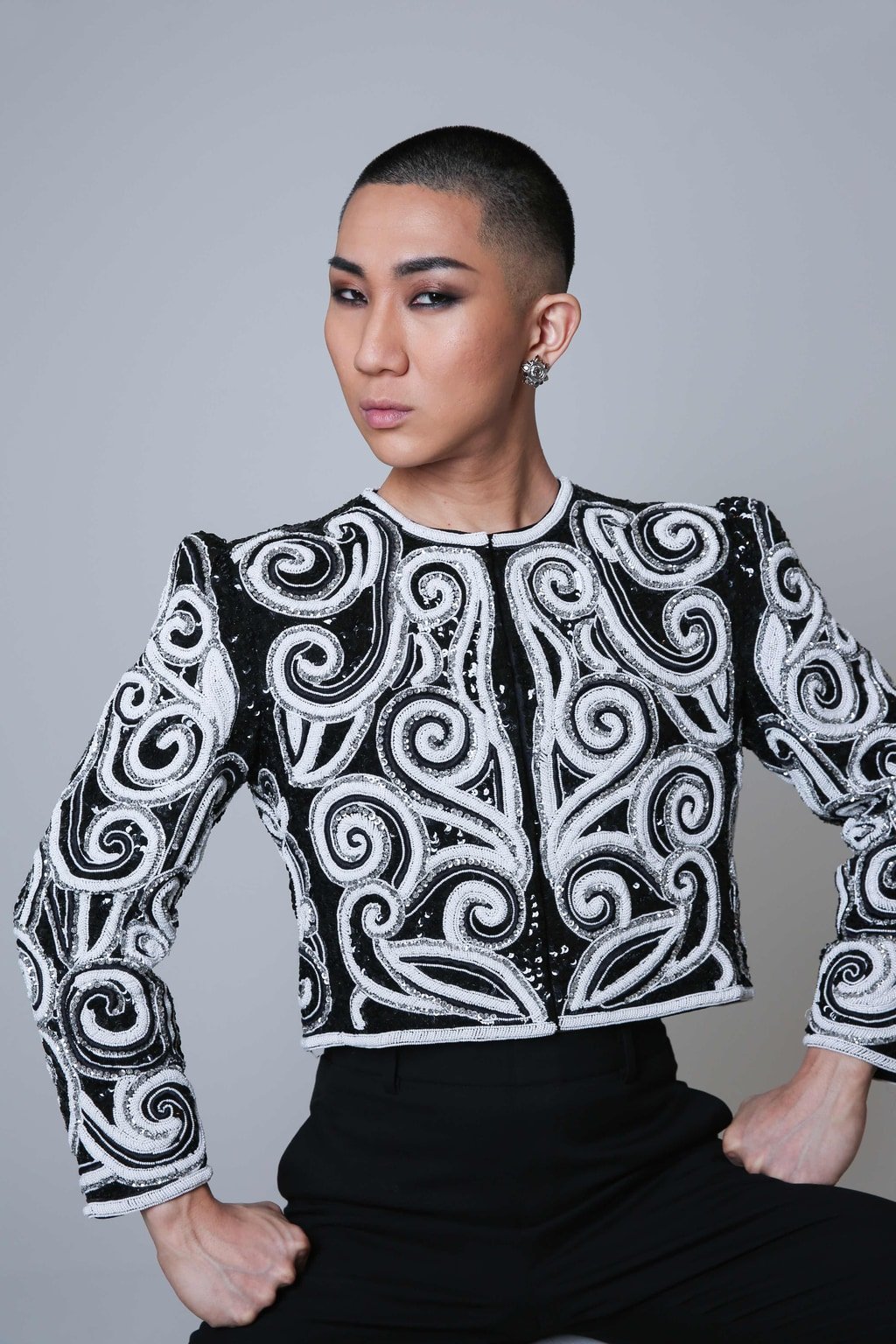 How has your life changed in recent years since appearing on Queer Eye: We’re in Japan?

Well, people have started recognizing me on the street and in toilets! To be honest, I knew that I was going to be a public figure. I knew I would be able to give an impactful message to the world. So I was always careful of how I looked or was perceived by people. So I’m not surprised and I was ready for it. At the same time I started to compare myself with other influencers, which I think is very natural. And I was given many opportunities to become friends with them. Successful designers, models and other talents. Instead of comparing myself to others, I’d like to learn from these people because many of them are very professional and dedicated in what they do. I want to effectively spread my message and to inspire people to be free. Also I’d like to reach leaders of the world so they can be more understanding of LGBTQ rights. There are more than 70 countries where it’s illegal to be LGBTQ so I would like leaders to make the laws a bit more accepting so that anybody can feel safe whether they are wearing makeup or heels regardless of their gender. We want to speak up and be ourselves but there needs to be a safe environment to do so. So that’s my goal after becoming a little more known.

Do you think attitudes to LGBTQ issues and rights are changing in Japan?

I think so. There are more and more same-sex partnerships in Japan. Unfortunately nationwide, Japan as a country isn’t allowing marriage equality but there is pressure on the politicians. There are many people fighting for that. And I participated in new rainbow parades happening in different parts of Japan such as Kanazawa Rainbow Pride (in October 2021). It was the first time that it took place in the northwestern region of Japan. So I’m happy people are uniting and that younger people are more supportive of marriage equality. It is changing. Do you think same-sex marriage will become a reality in Japan soon?

I think so. As the generations change there really is no reason to be against LGBTQ rights. People talk about traditional values, but in Buddhism, which has more than 2,000 years of tradition, it doesn’t say anything against LGBTQ people. It’s solely rooted in history, with the war and how the government wanted to control people. They gave more power to men using patriarchal systems. LGBTQ people exist for an evolutionary reason. The more diverse people are and the more colorful they are means there will be more possibilities. People cannot shine vividly if we are not treated with respect.

You have said in another interview that your favorite saying is from the Amida Sutra.
When I was training to be a monk I asked my master if it was ok to be LGBTQ and he said yes. There was a sutra called the Amida Sutra which talks about the pristine pureland. In the pond there are colorful lotus flowers blossoming and the sutra means that the uniqueness of the diverse colors is beautiful and we don’t have to be just blue or red, that our diversity is beautiful.

Do you have any exciting plans coming up?

I am creating an illustrated story of an LGBTQ superhero character, called “Kodo the Liberator.” As a child, I never saw any LGBTQ main characters in anime. If I had seen a positive representation, I would have had a better perspective about my sexuality. So I designed one myself. This hero is a homosexual Buddhist monk who transforms into a superhero. He helps people with magical makeup. I hope it can inspire people with the charm of this manga story. When This Monk Wears Heels comes out in English, do you have hopes it will be available in other languages?

Actually it’s already been confirmed that my book is going to be available in German and French. I already signed the deal. By the way, This Monk Wears Heels is inspired by The Devil Wears Prada. When I was in New York as a makeup artist, I met many beautiful top models. Does being beautiful and wealthy always equal happiness? It really doesn’t. Seeing and meeting these people first-hand and listening to their stories really convinced me. I don’t have to be wealthy or beautiful to be happy. Happiness is something like the wind. You can go outside and you can find it anywhere. Or you can close the door and decide to be unhappy. You can always find a reason to be happy.

You’re known for being super stylish, do you have any designers or brands you like or respect?

I tend to support brands which have LGBTQ designers or CEOs, for example Apple’s Tim Cook or Maison Margiela which is run by John Galliano. I really appreciate their anti-traditional philosophy when they design clothing so I feel very connected with them. These LGBTQ leaders have gone through similar struggles to me and I would like their companies to succeed and to prove to the world that we are LGBTQ people contributing to many smiles. It would be incredible if I can give an optimistic image of LGBTQ people to the world too!

This Monk Wears Heels: Be Who You Are is available from February 8.