Louis Vuitton is taking over Tokyo this spring, from Harajuku to Ginza, with a historical exhibition and a futuristic facade

Louis Vuitton was one of the first foreign luxury brands to come to Japan. Since then, the Japanese market has been one of its strongest, so it should come as no surprise that there are more than twelve Louis Vuitton stores operating in Tokyo. In Ginza alone, we can find three branches—at the Matsuya Ginza department store, the Dover Street Market Ginza store, and the newly opened flagship store at Namiki Street. In addition to the new facade on the Namiki branch in Ginza, there is a grand exhibition on Louis Vuitton history at the Jing building in Harajuku, making Louis Vuitton the talk of Tokyo in the spring of 2021.

The aesthetically designed seven-storey building that was unveiled last March, is the remarkable work of architects Jun Aoki and Peter Marino. The undulating two-layered glass facade, covered with dichroic film, emulates rippling waters in pearlescent colors, which mirror the neighboring towers that seem to swim across the dancing rhythm of the exterior’s wavy surface. This marvelous expression of water evokes a dynamic and fluid Ginza that reflects an extension of the nearby Tokyo Bay.

The shop interior, likewise, reveals an astonishing picture of multiple forms and playful colors, with a large monogram jellyfish suspended from the central ceiling. One of the most eye-catching features is the sculptural oak central staircase winding through the store, almost like octopus tentacles, that also nods to the water-flowing theme.

Modern and artistic furniture by Pierre Paulin, Stefan Leo, Morten Stenbaek and Isamu Noguchi add theatrical tones of bright pinks, reds, oranges, and yellows to the wonderful paintings and objet d’art by world artists displayed inside. Additionally, a sophisticated café, the Le Café V,  will debut inside the store at the end of April this year. It will offer the first Louis Vuitton Le Chocolat brand chocolate, and will be the world’s second Louis Vuitton café. Continuing the artistic expansion of the Louis Vuitton brand, there is a grand exhibition of its history and product development at the Jing building in Harajuku until May 16th, 2021. The enormous black glass-boxed building stands strikingly at the intersection of Meiji-Jingumae and Omotesando Street, just fronting the Jingu Bridge. Jing opened in 2019, and is a development project of Sunny Side Up Co., Ltd., which acts as a commercial and information facility for disseminating contents around Japan and the world in the areas of fashion, gourmet, sports, music and technology. The name “Jing” derives from “Jingu-mae” and also combines “Japan” and “~ing” to represent a meeting place where people can experience the progressive changes of Japan’s present and the future. The so-called “Jing vision” is a large-scale construction of about 2,605.12 m2 that combines LED panels across two floors.

The “LOUIS VUITTON &” exhibition celebrates the brand’s 160 years of creative exchanges and artistic collaborations. Throughout the years, the company has cooperated actively with renowned Japanese artists, architects, and designers, such as Kansai Yamamoto, Yayoi Kusama, Takashi Murakami, Nigo (Tomoaki Nagao), Rei Kawakubo, Arata Isozaki, and others, whose diverse and visionary products are showcased artistically in the ten immersive rooms of the exquisite exhibition. In one of the exhibition rooms, the company’s interaction with Japan as early as the 1920s is illustrated in a huge fine art print. It depicts a Japanese garden with a stone lantern, a shrine gate, and a backdrop of Mt. Fuji, which represent the window display of the Avenue des Champs-Élysées store in Paris installed by Louis Vuitton’s grandson, Gaston-Louis, in honor of Emperor Hirohito’s visit to Paris in 1921. The Paris store facade also portrayed the image of the Land of the Rising Sun.

The exhibition also focuses intently on the LV monogram, which has been likened to the designs of the Japanese family crests and bears the same value and distinct symbolism in offering high-quality products and services. The section Bags as Blank Canvas displays a colorful array of the LV bag collection with the reimagined and transformed monograms inspired by designs from Takashi Murakami, Stephen Sprouse, Jeff Koons, and other artists and designers. 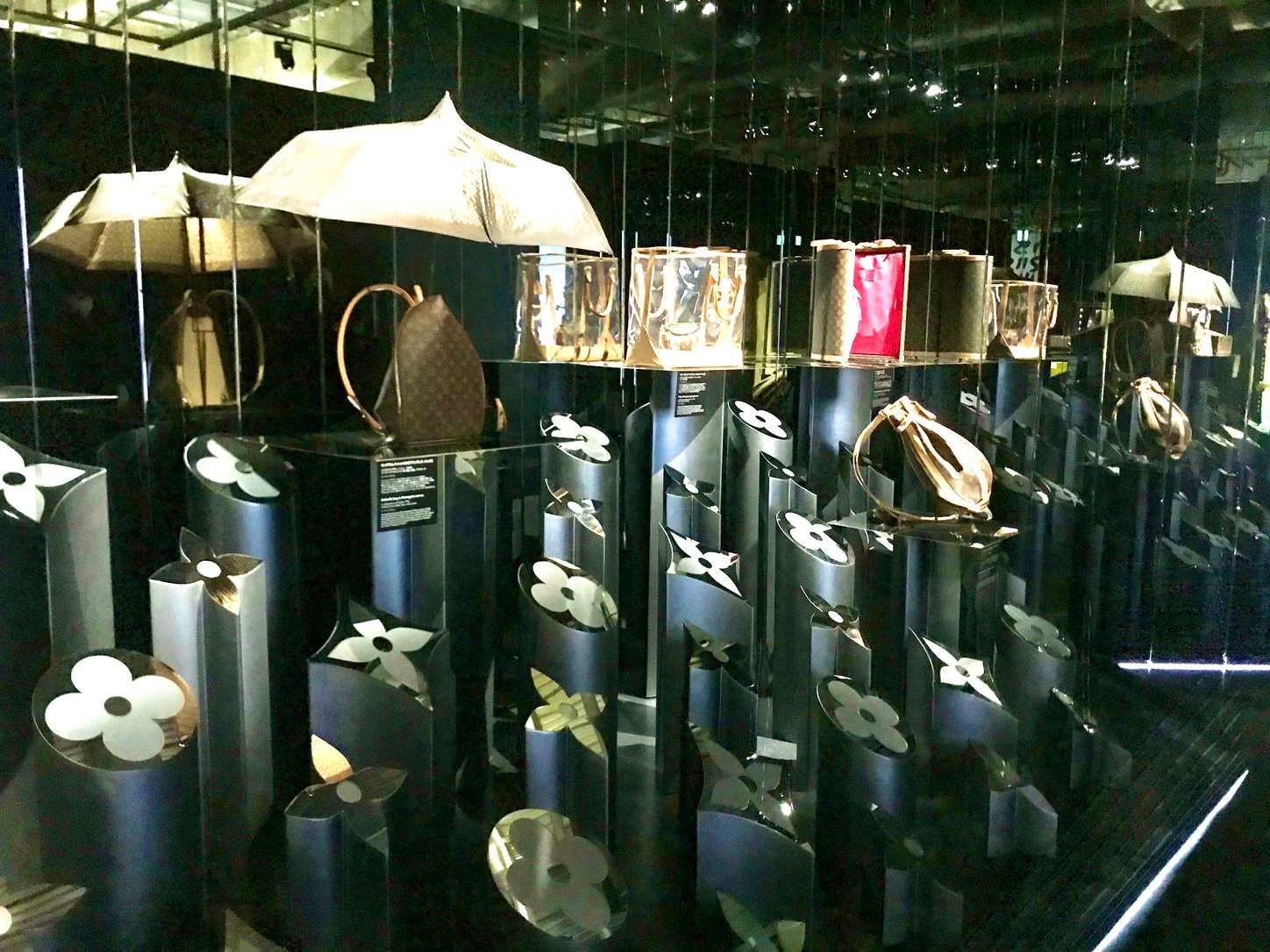 One of the most engaging spaces is the Art on Silk. The floor, walls and ceiling are a picture of art, filled with black scribbled letters of “Louis Vuitton Paris,” and showcases a wide assemblage of LV silk scarves designed by exceptional talents, such as Sol LeWitt, James Rosenquist, Gae Aulenti, and Andrée Putman who collaborated on the Textile Series. In the following years, the fabric series revealed more dynamic creations by a multitude of international artists and designers, including Takashi Murakami and architect Arata Isozaki.

*Exhibition open until May 16, 2021
Free entrance, but a prior reservation is required From the early LV leather trunks displayed that have become legendary icons, such as the 1898 bed trunk, 1924 painting trunk for art dealer René Gimpel, and the 1929 desk trunk for composer Leopold Stokowski, to newfangled concepts of bags, apparel, shoes, hats, jewelry, textile, wallets, and other accessories, the Louis Vuitton exhibition encompasses a comprehensive retrospect of the company’s unprecedented achievement in brand strategy and promotion of global relations. Likewise, the stunning Namiki Street store has proven the brand’s world-class approach and impeccable influence on future fashion, art and design innovation.

All photos other than the credited are by the author, Alma Reyes