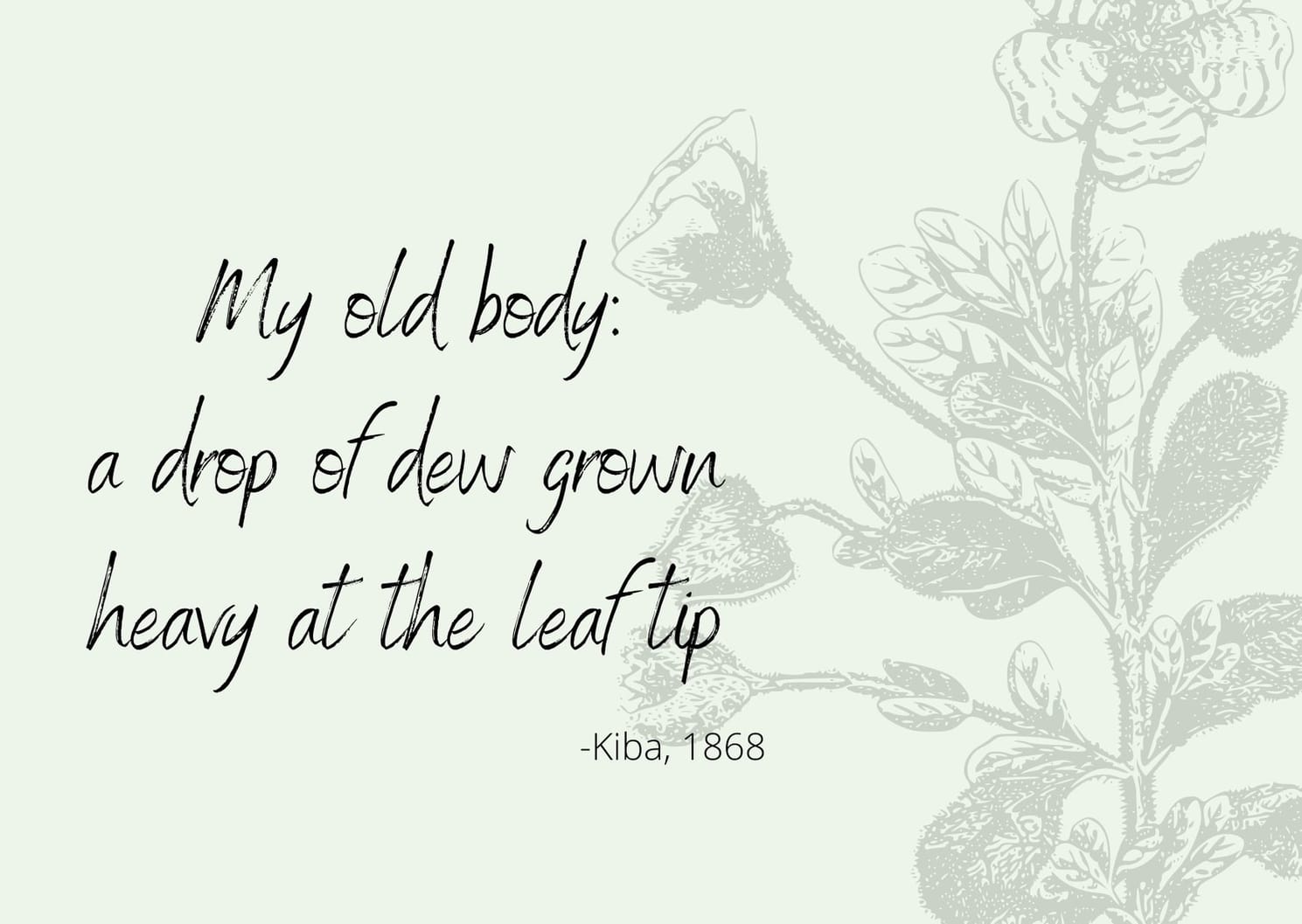 The 19th-century poet Kiba wrote the above verses shortly before his death. The metaphor of a heavy drop of dew about to fall is really being put to work here as it describes human life at the edge of expiring while connecting it to the world of nature and also making it clear that, in the grand scheme of things, the individual human existence is a little more than a blink. We’re all like dew on leaves. Though some dews are admittedly heavier than others, as Kiba himself died at age 90. All in all, it was probably the perfect final work for a poet to leave behind.

But it was no coincidence, as Kiba wrote it on his deathbed, knowing that he wasn’t long for this world and following the ancient Japanese tradition of jisei (辞世): poems composed before one’s death.

Jisei first appeared around the 7th century, and in the beginning, there wasn’t much uniformity to them. They were a person’s last words that tended to be expressed in poem form because while they weren’t restricted to any one class, they did require the author to be literate. And back then, most people learned to read and write by studying lyrical texts. At the time, it is fair to say, that the author could have experimented with the style of writing as they wished. However, as these final words became a common practice, in a short time, the jisei were codified and saddled with some rules.

For one, it was expected of them not to mention death directly and also be neutral about it, like in the last poem left by the great Matsuo Basho as he was dying of an illness: There is also the poem left by Yukio Mishima before he committed seppuku after his failed coup attempt at a Tokyo garrison: Falling flowers, falling dew, withered fields. All of these metaphors were common in jisei to avoid uttering the dreaded D-word. Still, though, some authors realized that since they were leaving this world, there were no consequences for breaking the jisei rules, which is how we get poems like the one composed by the poet Kisei: Jisei were most often written as Japanese-style poetry (waka), with the most popular types being the well-known haiku. They also came in the form of tanka, which follows the 5-7-5-7-7 syllable format, but even that was occasionally challenged. For example, in lieu of a poetic death poem, the 17th-century monk and poet Soho Takuan simply wrote the character for “dream,” which, ironically, is just about the most poetic thing you can do.

For centuries, Japan has been home to two major religions: Shinto and Buddhism, with the latter, mostly making appearances at funerals. It was unavoidable, seeing how much Buddhism, specifically Zen Buddhism, talks about death.

The three pillars of Buddhism are the belief that the material world is fleeting, that attachment leads to suffering and the nonexistence of self. That’s why Buddhism encourages the constant contemplation of death, and why jisei can be traced back to this belief system. The poem that best exemplifies these Buddhist ideas of the ephemeral nature of life and the oneness of life and death is probably the jisei by the Zen master Ichikyo Kozan, who died sitting upright after putting down his brush which he used to write: It Wasn’t All Grim

The rule for not talking about death directly was also a way for poets to think more about their lives. In the end, jisei was meant to be an expression of the acceptance of death and a look back at how you spent your time on Earth. Buddhism didn’t much care for the “life” part, but the people writing jisei were still, well, people. They had lived their lives, and some tried to square them with the idea of their deaths. Perhaps none did it better than Moriya Sen’an, who wrote: When our time comes, it would be a life well-lived if we are to find humor in our passing.