Start the year right with a selection of personal Japan-based stories, from longtime residents recounting their lives here to Japanese people digging deep into the traditional practices of their homeland. Three books are TW Book Club picks — two upcoming and one former — so if you want a sneak peek at what we’ll be featuring this year, read on. Our April read for the TW Book Club is an enthralling personal journey by Hannah Kirshner in the depths of Yamanaka in Ishikawa Prefecture. What starts out as a two-month apprenticeship at a small sake bar becomes a unique opportunity to get firsthand insight into the lives and works of traditional artisans. Her lyrical style is soothing and retains the magic of her experiences without being overly effusive. The book is dotted with beautiful illustrations, and exquisite recipes finish each chapter. It’s a respectful, insightful and illuminating work to be savored. First printed in Japanese in 1996, Nonomura’s account of his transformation from Tokyo-based designer to trainee monk offers a jaw-dropping insight into the rigorous training at Eiheiji. The temple is one of two head temples of the Soto Zen sect and is famous for its strict rules. The rules are based on the founder Dogen’s 13th-century teachings and detail every aspect of monastic life down to the tiniest detail — including how to use the toilet. Nonomura switches between diary-like stories describing daily life and routines and arcane texts penned by Zen masters to give us a fascinating overview of what a long-term stay in a temple may be like. “The Good Shufu: Finding Love, Self, and Home on the Far Side of the World” by Tracy Slater

How do you transition from being an independent educator with a Ph.D. in Boston to a full-time housewife in Japan? Ask Tracy Slater. Building a life in a foreign country is never easy, but adjusting from being entirely in control of your life to suddenly being illiterate and unable to do basic daily tasks without support is on a different level. And as Slater’s story eloquently explains, having a spouse from the country you’re in both eases and complicates matters. It’s a brave, heart-warming personal journey with keen insights into both Japan and the US’s stereotypes and prejudices. Her story has a happy ending, but it doesn’t stop there — Slater still occasionally offers updates on The Good Shufu blog. “Where the Dead Pause, and the Japanese Say Goodbye: A Journey” by Marie Mutsuki Mockett

2021 marks the 10th anniversary of the Great East Japan Earthquake and resulting tsunami. Mockett, a half-American and half-Japanese writer raised in the US, heads to Japan just three weeks after the disaster. Her family runs a Zen temple in Iwaki, about 40 kilometers south of the Fukushima Daiichi nuclear power plant. She is there to bury the bones of her maternal grandfather, who had died sometime before, of natural causes. We follow Mockett’s journey as she explores her grief and ancient Japanese rituals surrounding death is one of loss, perseverance and hope. Where the Dead Pause, and the Japanese Say Goodbye is the TW Book Club read for March 2021. “Every Day a Good Day: 15 Lessons I Learned About Happiness from Japanese Tea Culture” by Noriko Morishita, translated by Eleanor Goldsmith

Every Day a Good Day gives insight into the sometimes seemingly impenetrable world of Japanese tea ceremony. Morishita unveils the wisdom she has gathered after 25 years of tea ceremony practice. At first, she feels hampered by the constrained rules and is unable to do anything right — a feeling many international residents can relate to — but over time discovers a sense of freedom through the strict guidelines. The first lesson, “recognize you know nothing,” is a humbling reminder for both tea ceremony and life in general.

If you prefer movies, Every Day is a Good Day (Japanese title: Nichinichi Kore Kojitsu), starring the late Kirin Kiki, was released in 2018 and is available on Netflix. “Tokyo Vice: An American Reporter on the Police Beat” by Jake Adelstein

Hard-boiled journalist (and first non-Japanese for Yomiuri Shimbun), Jake Adelstein takes us through the seedy streets of Tokyo as he recounts his days on the police beat. There, he rubs shoulders with cops and criminals alike, both useful and hindrances to his scoops. He ends up in situations unimaginable outside of a movie script as he puts his life on the line in this fast-paced, gripping real-life portrayal as a journalist exploring the underworld. Expect mayhem and madness and a lot of drinking. Kerr’s heart-warming collection of personal essays is a love letter to Japan. Originally part of an article series for Shincho 45 magazine, it was published in Japanese in 1993 and translated into English in 1996. Kerr’s evocative depiction of how Japan ruthlessly demolished its old houses — only to be replaced by garish pachinko parlors and dated office buildings — is poignant and as true today as it was 25 years ago. Topics range from kabuki and calligraphy to his childhood growing up in Yokohama and more. It’s a must-read for any Japan resident, along with Dogs and Demons: The Fall of Japan, which details a more damning version of the same phenomenon. “The Only Gaijin in the Village: A Year Living in Rural Japan” by Iain Maloney

Another book birthed from an autobiographical column, Maloney’s series The Only Gaijin in the Village, was first featured on GaijinPot, depicting the trials and tribulations of country life in Japan with a humorous twist. Though he had lived in Japan since 2005, the move to rural Gifu Prefecture from an urban Aichi Prefecture commuter town proved a culture shock. His often self-deprecating bucolic anecdotes cover everything from farming ventures and neighborly relations to keen observations of social and cultural issues familiar to us all. The book is split into four parts — in honor of Japan’s four seasons — as it follows Maloney and his wife’s first year in pastoral paradise. 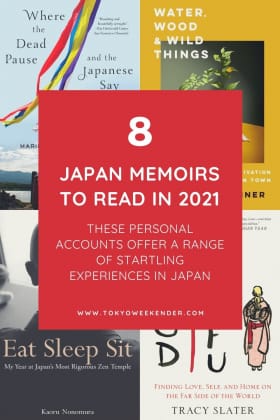