Nambu Ironware: Everything You Need To Know About Iwate Prefecture’s Famous Metalwork

From iron kettles to nabe pots, Nambu tekki is one of Japan's most profitable crafts. Here is everything you need to know about Iwate's unique metalwork.

On a trip to not one, not two, but three factories in Iwate Prefecture specializing in the region’s Nambu tekki, or Nambu ironware, the vast array of designs, colors and prices for the iron kettles sitting on the shelves was eye-popping.

Ironware is not unique to Japan, but because of its recognition at a national level, Nambu tekki is often considered the best metalwork in Japan and collectors across the world are willing to pay top dollar. What is Nambu Ironware, Exactly?

Nambu ironware refers specifically to cast iron products made in Iwate. The prefecture, located in the northern region of Tohoku, has always been rich in minerals which allegedly prompted the construction of mines as early as the Nara Period (710–794). The city of Kamaishi is said to have given Japan its first gold find in history. Cast iron, however, wasn’t as coveted as it is now until the 17th century, when the head of the Nambu clan, which ruled the region for a few centuries, gathered the best metal workers in the country to define Iwate’s timeless ironware.

Nambu tekki is often described as a premium type of cast iron known for its incredible durability. Back in the Edo Period (1603–1868), when the craft was making its first waves in the country, households who could afford it would order custom teapots or kettles with detailed and evocative designs made to hand down to future generations.

In Japan, Iwate’s ironware is not only used at home, but also during traditional tea ceremony, and you might be surprised as to why. Of course, kettles are used to boil water used to serve tea, but the cast iron here is said to play a crucial role in the flavoring of the tea.

But how can a kettle, or in this case a tetsubin (Japanese iron kettle), do that? Kettles made from Nambu cast iron are left in a rather raw state, with the water chamber often left bare or protected with a thin layer of urushi lacquer. It is believed that the minerals that leak into the boiling water make tea taste a little bit sweeter and some even believe that regular use by those with iron deficiency can substitute iron supplements.

More Than Just For Tea

Though tetsubin and teapots are by far the most sought-after Nambu iron product, there are plenty of other household items you can purchase. There are many more kitchen tools made of the coveted material that promise the same durability but are perhaps more suited to your cooking style. Cooks with a preference for Western cuisine will know that a cast iron pan is one of the best kitchen tools you can invest in. If you live in Japan, then why not shop local? Other traditional items made of Nambu ironware are furin (Japanese windchimes), incense holders, small garden decorations and even some chopsticks holders. Easier (and much lighter) to pack in your luggage.

Today certified Nambu ironware manufacturers are mostly located in Morioka or Oshu cities and collectively they form a total of 74 factories and employ 730 artisans, which speaks of the product’s high demand in and outside Japan. While a trip to Iwate Prefecture is certainly recommended, Tokyoites can find Nambu ironware via online retailers, local kitchenware stores or Iwate’s prefectural antenna shop in Ginza. 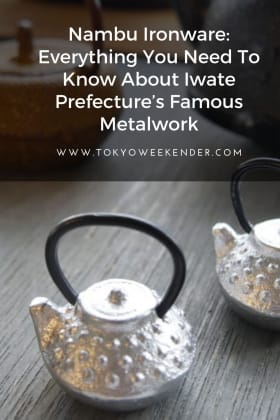