Zen and the Art of the Japanese Tea Ceremony

As the winter sunshine crept across the tatami, our hostess, tea master Masumi Kirihata, performed the elegant, precise steps of the Omotesenke tea ceremony.

It was December 2015, and Kirihata (whose tea name is Koshi Soushin) performed the traditional tea ceremony for our small group there in Kyoto, describing each step and utensil in detail as well as a description of the tea room itself.

I had booked the experience through Tea Ceremony Ju-an, and my fellow participants and I also had the chance to perform our own small tea ceremony. We ceremonially cleaned and prepared the chashaku (bamboo tea scoop), whisk and tea bowl and whisked the Uji matcha. My next experience with the tea ceremony came in 2016 near Kinkakuji Temple in Kyoto, where I was one of two chosen to perform the tea ceremony and serve guests tea that I had prepared. In December 2018, I had the chance to participate in an Omotesenke tea ceremony at Tokyo Metropolitan Teien Art Museum’s beautiful Koka teahouse, an Important Cultural Property.

In March 2019, I enrolled in a class through Kamakura Mind. On the first day, we shaped our tea bowls and practiced the tea ceremony (how to enter the teahouse, how and where to be seated, bowing to the tea master and guests, receiving and passing the sweets, preparing utensils and making the tea).

One month later, I rented a stunning kimono from Kimono Kuroudo Miyamoto and made my way to Houan teahouse near Jochiji in Kita-Kamakura. As we performed each step of the tea ceremony to the songs of Japanese songbirds, I felt a deep sense of gratitude and connection to this ritual that has defined Japanese culture for hundreds of years.

After receiving the tea bowl that I’d made, I invested in a Japanese tea cabinet, a chadansu, which is designed to display and store tea ceremony bowls and utensils. Most recently, I had the chance to visit Uji and participate in an Urasenke lesson at Taiho-an teahouse in Uji. Studying and performing the tea ceremony is closely linked to the study and practice of Zen. I find that following each step is a form of moving meditation that clears the mind and helps me to focus. The teahouse emphasizes both impermanence and appreciation of the seasons through the changing hanging scrolls, seasonal flowers, tea bowls and seasonal sweets as well as the surrounding nature. The Zen concept of “Ichigo Ichie” (a once-in-a-lifetime encounter) guides both the tea host and guests and carries over to life outside the teahouse through expressing gratitude, cherishing each meeting and focusing intensely on the present moment.

It is impossible to overestimate the importance of tea in Japanese culture. Not simply a beverage, the rituals of green tea go back hundreds of years and have had an enormous impact on Japanese architecture, cuisine, ceramics and classical arts. Uji (near Kyoto) has been Japan’s tea capital for 800 years, where you can visit tea plantations and shops that have been in business for centuries, as well as sample Uji’s refined tea cuisine.

Ritual tea-drinking was first practiced in Japan during the Kamakura period (1192–1333) by the monk Eisai, who introduced Rinzai Zen Buddhism to Japan. Eisei brought powdered green tea back from China, and his interest in tea was passed on to his disciple Dogen, founder of the Soto sect of Zen. When Dogen returned from studying in China, he brought back many Chinese tea utensils and gave instructions for tea ceremonies in the rules he created for head Soto Zen temple Eiheiji in Fukui Prefecture.

Appreciation of tea expanded from temples to include the warrior class. Early tea gatherings included contests, alcohol and gambling, along with showing off expensive tea utensils imported from China. As time passed, elements from these early gatherings simplified and evolved into the tea ceremony (chanoyu or sado, the “way of tea”) practiced today. The History of Japanese Tea Ceremony

Three individuals had a great deal of influence on the development of the Japanese tea ceremony. Murata Shuko (1422–1503) was a Zen priest who embraced the concept that the preparation and drinking of tea could lead to enlightenment. Murata’s tea aesthetic found beauty in the imperfect and impermanent (wabi sabi) and in the simple objects of everyday life. Next, Takeno Joo (1502–55) simplified the tearoom preferred by Murata and used unpretentious settings with simple utensils. Takeno Joo’s star pupil was Sen no Rikyu (1522–91), whose innovations in the art of tea incorporated elements of his Zen training at Daitokuji Temple.

Today, there are over 30 schools of tea currently practiced in Japan, with the largest being descendants of Sen no Rikyu’s lineage. Although the tea ceremony using matcha is the most well-known, separate tea ceremonies also evolved for other different types of tea as well. You can experience tea ceremonies for sencha and gyokuro teas at Taiho-an teahouse in Uji with advance reservations.

Whether you’re visiting Japan or are a resident, it is well worth seeking out your own tea ceremony experience to discover the magic and Zen of tea for yourself. 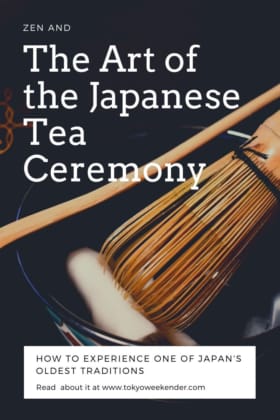