May 25, 2020 was a day that forever changed how many condemn injustice and racism. The public murder of George Floyd triggered outrage across the globe, urging millions to speak up, march in public and unite against police violence and systemic racism. It also motivated us to educate ourselves and start understanding the problem on a much deeper level.

The Black Lives Matter movement, however, is not new. Though it officially surfaced in 2013 after George Zimmerman was acquitted for the murder of Trayvon Martin, a black teenager from Sanford, Florida, it has far, far-reaching roots tracing back to early American settlement and their shameful slave-trading history.

We’ve put together a selection of 10 films and documentaries — a rather short list of the countless educational titles that exist on various streaming platforms — that can help us understand the deeply rooted problems in the American society that have led to the marches today. For those of you who wish to explore even further, Netflix has just announced a “Black Lives Matter” genre option, which is expected to launch globally very soon.

In May 2010, 16-year-old Bronx high school student Kalief Browder was stopped by the police for allegedly stealing a backpack. He subsequently spent the next three years in Rikers Island jail — two of those in solitary confinement — not because of guilt (Browder was innocent), but because of a broken system and the inadequacies of those who work within it. This six-part documentary series unearths the errors that led to Browder’s unjust incarceration, from his improperly recorded arrest, the failure of the police department to keep track of the victim, and the slow-moving action of the court system. Throughout his incarceration, Browder was repeatedly offered a plea deal, but he remained steadfast, insisting on his innocence. At last, he beat the system. His life by then had been so profoundly damaged, however, that after years of living with depression caused by his abused life in prison, he took his own life at the age of 22.

The 13th amendment in the United States Constitution, adopted in 1865, was meant to abolish slavery throughout the nation. It was supposed to end the country’s involvement with involuntary servitude — except for caveat being the “punishment for conviction of a crime.” Directed by filmmaker Ava DuVernay, this 2016 documentary explores how this amendment to the constitution has over time become a loophole for organizations to incentivize black incarceration, as a way to maintain “racial control” and state-sanctioned modern slavery.

Partly based on her New York Times bestseller memoir of the same title, Becoming documents the life and career of Michelle Obama. As the first lady, Obama became one of modern America’s most influential and inspiring figures. The film, however, is much more than just a record of her political work. In her own words, “so little of who I am happened in those eight years. So much of who I was happened before.” Like her book, this film traces Obama from her roots in Chicago all the way up to the book release of Becoming. It’s an uplifting tale of self-belief and perseverance.

Released in 2014, just over half a century after the events it depicts took place, Selma was one of the most critically acclaimed releases of its year. Sadly though, the events look eerily similar to the ones we’re seeing on the news today. The film, also directed by Ava DuVernay, explores the lead-up and the resulting effect of the 1965 “Selma to Montgomery” voting rights marches led by Martin Luther King Jr., Hosea Williams, and John Lewis, and initiated and directed by James Bevel. If you know little about the work of Martin Luther King Jr. or the long-running battle for civil rights, the right to peaceful protest and the fight for equality, Selma is a great place to start.

The murder of Michael Brown Jr. in 2014 at the hands of white police officer Darren Wilson in Ferguson, Missouri, set off a wave of protests and unrest in Ferguson. Whose Streets documents the unrest, protest movements, their activists, leaders, and the response of the heavily criticized local police agencies in dealing with the protests. The film’s directors, Sabaah Folayan and Damon Davis, spent more than a year in Ferguson after the death of Michael Brown, bearing witness to the protests that followed.

In partnership with Vox Media, Netflix has released Explained, a series of short (less than 30 minutes long) documentaries explaining complex issues in a simple to digest format. The 16-minute long episode Explained: the Racial wealth Gap draws on a wealth of knowledge from experts like politicians, writers, sociologists to understand the history of the US’ evolution of wealth. The documentary traces the history from the 1800s when cash was used as a way to trade black slaves to the modern global financial crisis and how the impacts of the actions of the predominantly white financial institution Wells Fargo most negatively impacted black households. If you want to learn more about how the US financial system works — or doesn’t — this is a good title to begin.

Watch on: Netflix and here

Another Ava DuVernay production, When They See Us is a 2019 series based on the infamous 1989 Central Park jogger case. The story follows the lives of the five POC male suspects who were falsely accused and prosecuted on charges related to the rape of Trisha Meili, the 28-year old jogger. It’s not until 13 years later in 2002 when the assailant confesses that the convictions of the five are vacated. The four-part series takes an intimate look at the corrupt inner workings of the cases’ prosecution, as well as the impact the event had both on the families of the accused as well as society on the whole.

In 1992, an LA-based, unarmed construction worker by the name of Rodney King became the face of police brutality after footage of his shocking beating at the hands of the LAPD. Following a high-speed car chase, while under the influence of alcohol, King initially evaded arrest but was swiftly beaten to the ground and subsequently beaten between fifty-three and fifty-six times by a group of 14 police officers. Thankfully he survived. Following the events, four officers were tried on charges of police brutality, three were acquitted, and the jury failed to reach a verdict on one charge for the fourth. The actions of the LAPD for many represented the institutionalized racism within the force, setting off a wave of protests and riots across LA. LA 92 is a raw, unflinching look at racial tension and systematic abuse within the US forces. It’s not an easy watch but an important one.

Released in 1991, the messages explored in Boyz n the Hood are just as important as they were almost 30 years ago. The film starred breakout performances from Ice Cube, Cuba Gooding Jr., Morris Chestnut, and Laurence Fishburne and was directed by John Singleton, who at the time was just 23 years old. Similar to The Breakfast Club and Pretty in Pink, Boyz n the Hood is a classic coming of age American drama, but unlike most mainstream coming of age flicks, it features a predominantly black cast and showcases an earnest, but a real look at what it’s like to grow up black in South Central Los Angeles.

Dear White People was first released in 2014 as a critically acclaimed satirical comedy-drama film that follows the journey and social battles faced by a group of black students attending a predominantly white university. In 2017, a TV adaptation was released on Netflix picking up where the film left off. In terms of messaging and themes, it’s a lot less raw and hard-hitting than other choices on this list. However, it’s a fresh take on the college sitcom genre, one that both highlights the realities of growing up black in a white-controlled world. It’s a binge-worthy sitcom with a sense of social awareness.

Wish to add another title to this list? Let us know in the comments! 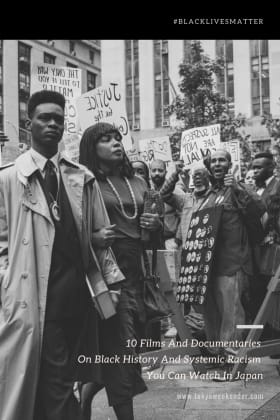