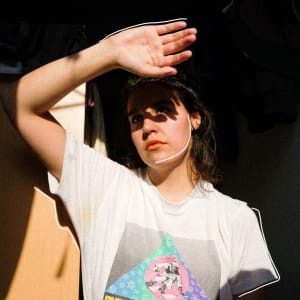 It was raining, but nobody minded the weather. Endless rows of transparent umbrellas spread before your eyes, finding their true purpose as they become canvases for powerful messages in different languages — Japanese, Spanish, English and more all read: Black Lives Matter.

It’s Sunday, June 14, 2020, the day Japan’s largest to date march in support of the Black Lives Matter movement took place. A day that all 3,500-plus participants and the hundreds of spectators who stopped to watch in support, will never forget.

Before the march, organizers and volunteers huddle beneath the walkway in the Yoyogi Event Plaza, safe from the rain. Black Lives Matter Tokyo founder, Sierra Todd, takes interviews beneath her own umbrella. “The main goal is to give people who are distressed about racial injustice a means to express their frustration and all their emotions. Having done that, I’m just happy to see that happening,” she says.

“I just want to say that what you do does matter. And if you are concerned about something, speak up, and find people who share that same voice because they’re probably out there and they’re people that can support you.”

As more people start trickling into the plaza, it quickly becomes clear that the magnitude of participants will surpass all expectations. Just outside the walkway, a Japanese newscaster interviews Sarah Brauer, a Japanese-American activist taking a stand against racism. 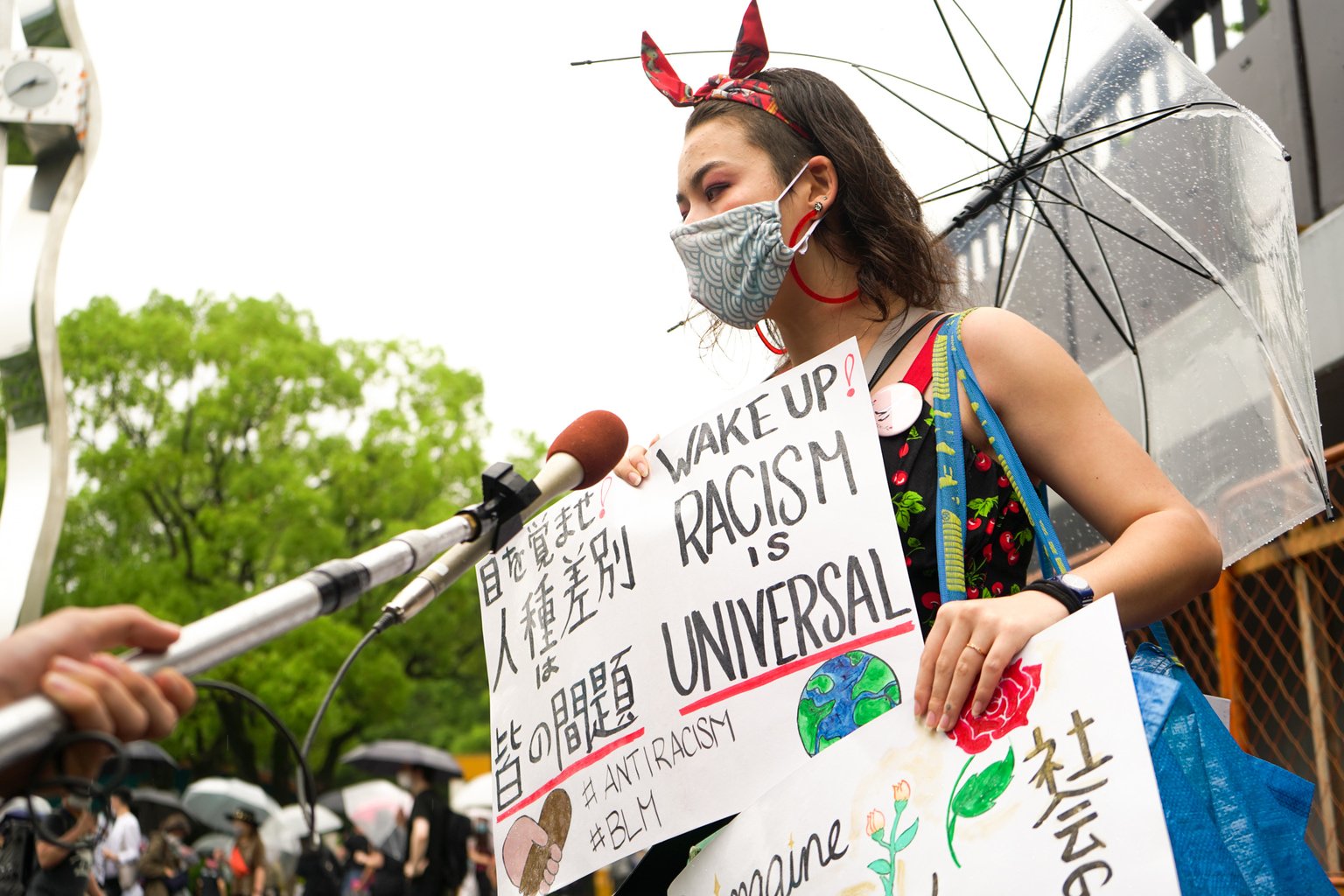 After her interview she’s slightly out of breath, but smiling and ready to continue spreading her message. “In Japan, some of my friends who are black have been randomly stopped and interrogated by police, and searched by police, and that was the first time that I realized that this was also a very big thing in Japan. The problem is that we live in such a homogeneous society that we don’t see it.”

“I hope that people in Japan see this and stand with them. Stand against racism.”

She relates that especially as half Japanese and American (known as “hafu” in Japan), and someone who has never lived in America, she feels frustrated with how people treat her differently in her home country of Japan. “I hope that people in Japan see this,” she gestures towards the many people arriving in the square, “and stand with them. Stand against racism.” She takes a deep breath and adjusts her colorful signs that she made together with her parents the night before. “I want people to see that there are this many people that think that it’s wrong.” 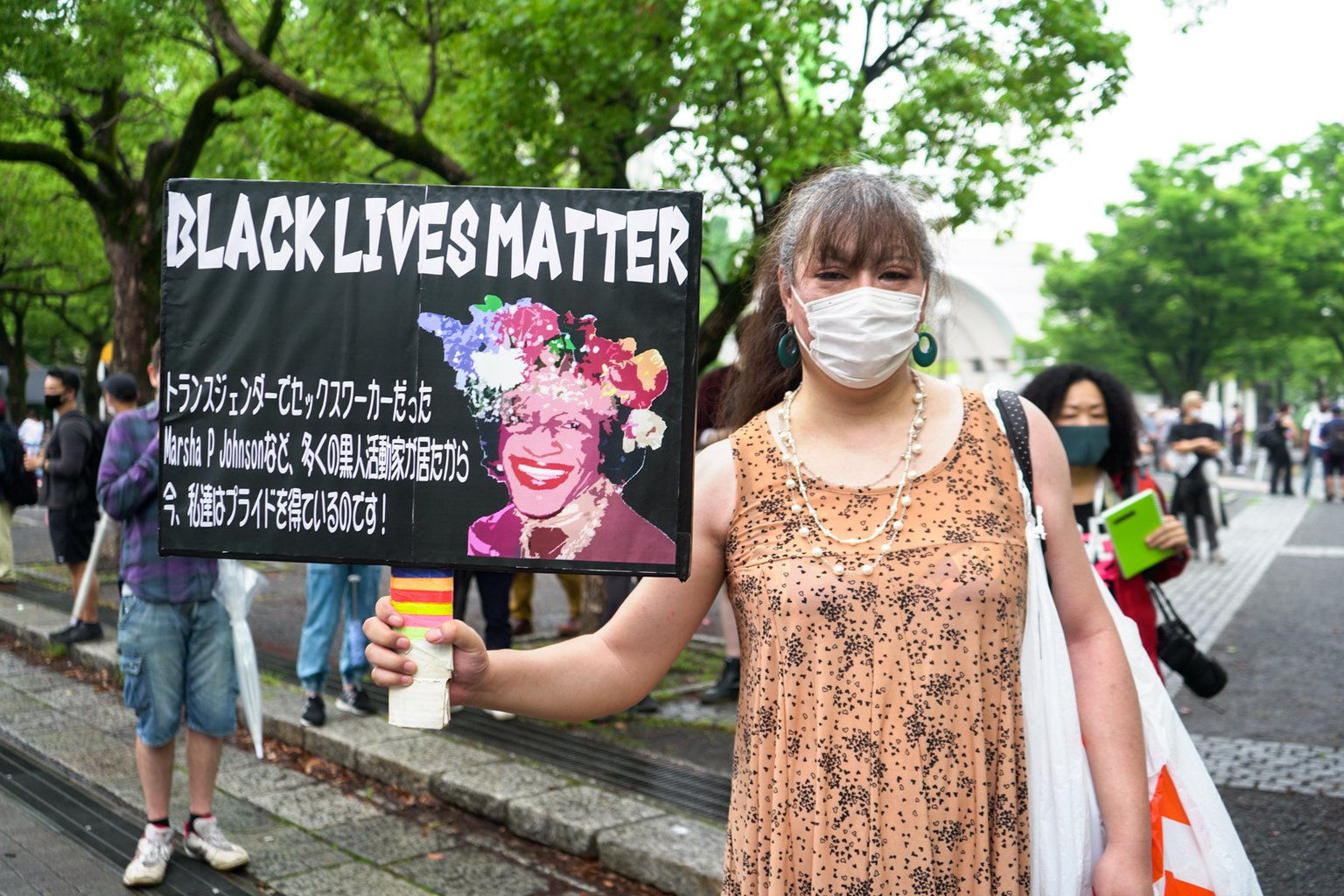 When it’s time to begin the march, the volunteers guide the masses to line up and to remain socially distanced, there’s also a sign check before the march starts. Event organizers expected 1,000 people. But 3,500 show up. At least.

Before the procession, volunteer and speaker, Nayokenza (Nayo) Robyn Oliver, is handed a microphone. The crowd quiets and calms when Nayo speaks, a volunteer interpreter reiterates the speech in Japanese.

“Thank you for coming today. I’m a black American who’s been living in Japan for a long time. I think a lot of black Americans kind of look at Japan and Tokyo as an escape from the white and black binary we have back home. Unfortunately, I started living in a bubble. Just come out here, feel safe, the cops don’t bother you as much, and you don’t have to worry about being murdered for your skin color.”

“So you just kind of unplug, and go into this little bubble that you create. But for me that bubble burst when Trayvon Martin first got shot. And then it burst again when every other person got murdered again in America. Living here as a black American, specifically for me, I started to feel guilty. Guilty that I was here, guilty that I felt safe, guilty that I was in a bubble. I felt angry that these things were happening again and again. I think this [march] is wonderful because it gives people like me, and everybody who might hate what’s going on, a chance to raise their voices.”

Nayo’s words are met with instant cheers and applause. Then they conclude, “Remember, please march in a peaceful manner. Black lives matter now, and black lives matter forever.” “Kokujin no inochi wa taisetsu desu!” The interpreter shouts in Japanese to several overlapping cheers, the many Japanese participants holding up their signs in solidarity, an all at once harmonious and heartfelt sound. 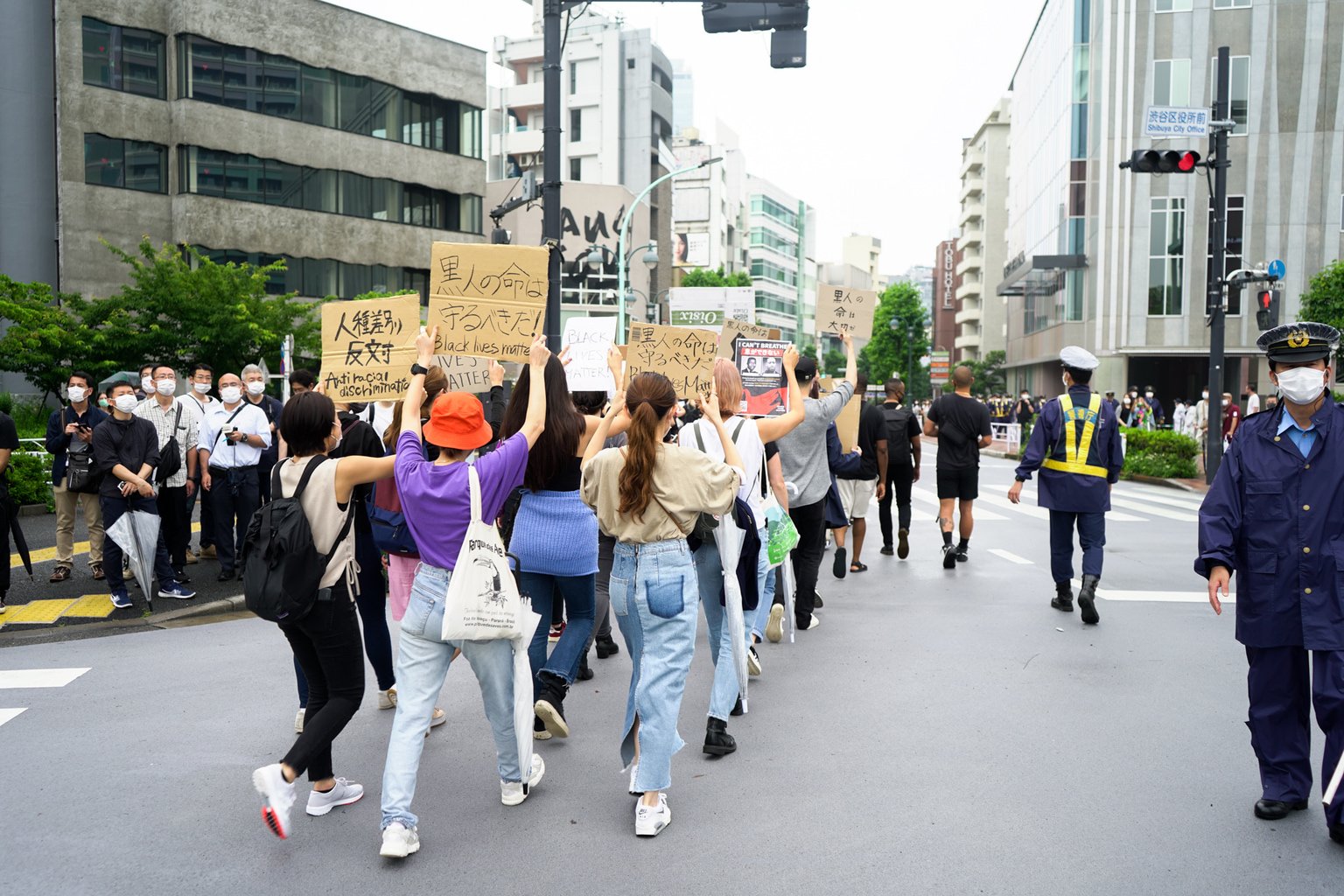 Moments later the first wave of participants fills the left side of the street, while being escorted by police. The march starts from Yoyogi Event Plaza and heads right into the Shibuya Crossing, passes through Omotesando and finishes once more in Yoyogi. On the streets, the voices are unified. Call and response: I can’t breathe. Arms are outstretched, hands clenched in fists or lifting hand-painted cardboard signs into the air for all to see. No Justice. No Peace. It was happening: a Black Lives Matter march in Tokyo. The largest to date in Japan. Thousands of people march alongside. Spectators join in by stopping and taking a moment to read the signs. Some stand with signs or flags of solidarity. Black Lives Matter. Spirits could not be dampened. Organizers had cautioned participants beforehand that a right-wing protest group, “NPO Movement Against Foreign Criminals,” would make an appearance at Shibuya Station near Hachiko exit. The Counter-Racist Action Collective began circling them, and prevented them from interfering with the BLM march. In addition there were two rows of police that surrounded the area. The march participant accounts that the voices from Black Lives Matter were so loud, and the people were so many that any message from the right-wing group was completely drowned out. “Nobody could hear them because the Black Lives Matters chants were louder.” An account from security indicates that the right-wing group went home before Black Lives Matter had even finished the procession. Voices are triumphant when arriving back on site in Yoyogi plaza. There’s a group welcoming those who have just finished their march around Tokyo. 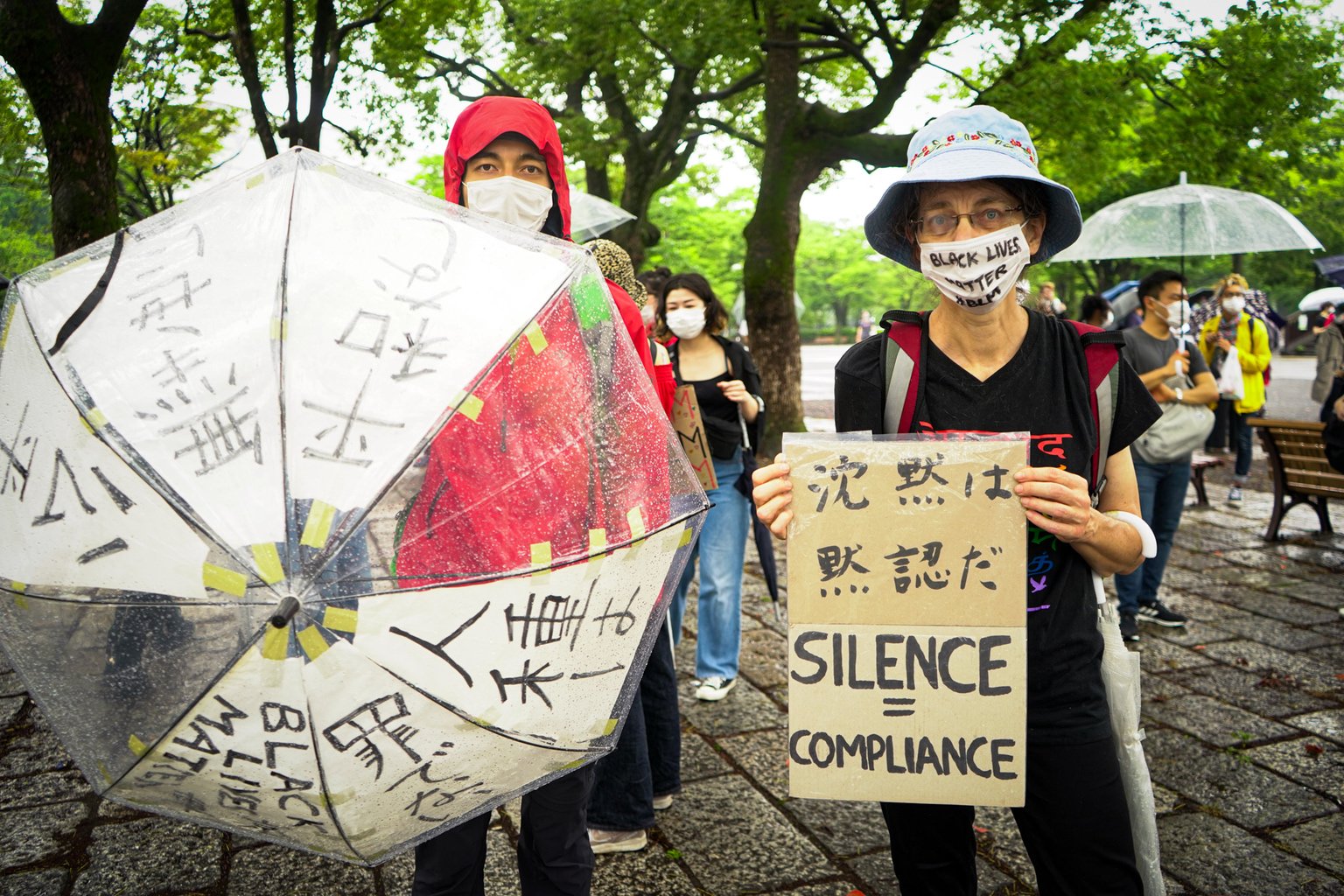 It’s here people begin taking photos and one on one interviews, exuberantly or solemnly relating words of hope, grief, encouragement or change.

“I hope that everyone takes away that black people are here, we have a voice, and we’re not going to be silent. People do support us. I think there were a lot of mixed messages, mixed thoughts when this was planned. And I’m so happy to see that people of all creeds and colors are out here. Japanese and other foreigners are out here supporting us, and it’s just an amazing feeling.” – Jaime N. Smith

“I’m feeling very overwhelmed. I’m British-Ghanian, I was born and raised in the UK, and I  often come across people saying that racism like this isn’t an issue here, that it’s only in America. I’m sure you’ve heard of the NHK documentary that was very racist, reinforcing stereotypes that aren’t true, and it didn’t reflect at all what is actually happening. So I really wanted to come today and reflect that it is an issue in Japan. It made me feel very emotional that even though it was really wet [today], people were still coming out for a good cause. I even saw a baby who had a mini sign in crayons saying that Racism is Wrong. I’m really hoping that people will keep going with their conversations, not just today but far into the future.”

“I went to the last Black Lives Matter in August 2016. We were considerably smaller, like 75-100 people total. While I felt like I was doing my part after what had happened in Ferguson, it felt like our message was preaching to a very small choir. Fast forward to now with not only the Tokyo March but several marches throughout Japan, it feels like a breakthrough! Our choir is bigger and more self-aware. I love that!” – Tia H.

“Mom, Dad, we learned about 2020. You had black people being killed and the whole world standing up against it. Mom and Dad, where were you when that was going on?”

“Read and do your own research. So many people are unaware of the roots of the marches and why people are angry. A lot of people don’t know how bad or how long slavery lasted or the laws enacted to keep black people economically disadvantaged.” – Brandon V.

“Modern day racism works in deniability, I think that’s something that is great. Now since you can’t deny it, I think that’s one of the driving factors that’s making everybody react. You’re either forced to do something about it, or fall back into the background and do nothing. I think that’s why we saw a lot people marching from different races yesterday because actually seeing it makes it real. It’s no longer ‘Oh I think this is what’s going on, it’s ‘this is what’s going on.’ And now you’re forced to try to do something to change it.” – Marcus L-Spade Johnson

In the center of Yoyogi plaza, the volunteers begin to take a knee. Participants gravitate toward the space, and a large circle of people from all over the world is born. The group falls silent. Leader and speaker, Juniper, shares parting words as the event comes to a close.

“I want to ask y’all right now. If you plan on having children, in ten, twenty, thirty years from now they’re going to open up their history book, they’re going to get to this point in history sooner or later in their lesson. They’re going to walk up to and be like ‘Mom, Dad, we just learned about 2020. Y’all had it rough.’” There’s laughter. Juniper pauses then continues, “You had black people being killed and the whole world standing up against it. ‘Mom and Dad, where were you when that was going on?’ How are you going to answer your children? Thank you. Thank you all for being here.”

For more photos from the march, see the photo coverage by Tokyo-based photographer Tia at TopTia Photography. You can also follow her on Twitter at @Toptiaphotos.

All photos in this article have been taken by Jes Kalled. Interviews and speeches have been condensed and edited for clarity.