The Jojoin Garden at Kiyomizu Temple is known as the moon garden, as the moon’s reflection on the central pond transfixes twilight viewers. The perfectly placed stones and manicured bushes surrounding the pond were designed to appear as if the scenery blends into the landscape of Mount Kodaiji, the revered mountain overlooking Kyoto, and Kiyomizu Temple (established in 778). The ancient landscape technique, in which the garden appears to effortlessly harmonize with the surrounding natural scenery, has become known as 借景 (read shakkei).

As opposed to the the structured and angular designs of European counterparts, this technique is what makes Japanese garden design revered across the world, and is the main reason why Japanese landscape architecture has grown into its own field of study. But how does one define shakkei – this intricate style of gardening that creates an intimate feeling within viewers that is nearly impossible to describe?

The term shakkei comes from Mandarin, but Japanese language students with some kanji knowledge might already have guessed its literal meaning. Formed by 借 (borrow) and 景 (scenery, view), the English calque of shakkei is “borrowed scenery.”

Though not conceptualized until the 1960s, some historians argue that basic principles of shakkei are alluded to in Sakuteiteki, a Japanese book on garden making written in the 11th century and the oldest resource of its kind in the world. Shakkei would have originated from early Chinese inspirations during the Asuka period (538-710) but was further developed thanks to Buddhist influences during the Marunouchi period (1336-1573). The technique peaked in popularity during the Meiji and Taisho periods. While not exclusive to Japan, it is a unique characteristic of East Asian gardens.

So, What is Shakkei?

In simple and non-technical words, shakkei is the incorporation of elements appropriated from the natural environment into the design of a garden, so the landscape blends seamlessly into the aesthetics of surrounding mountains or forests. Shakkei is also be said to be incorporated in the design of tall Japanese structures, notably pagodas.

The intention behind shakkei is to avoid an extravagantly designed space and trick the eye to think that the natural elements located outside the property are part of the garden. In addition to avoiding gaudiness, shakkei offers other benefits. It’s relatively economical, as it encourages to work with elements that are already onsite, and it allows for the illusion of an effortless harmony between the garden and the surrounding nature, which has become the defining characteristic of Japanese gardens.

In contemporary Japan, shakkei can be applied virtually anywhere. What used to be a technique meant for landscape architecture is now being rethought to fit the metropolitan lives of many, notably how one can incorporate Tokyo’s ever-growing skyline into modern architecture.

Where to Find Shakkei Gardens in Japan

There are quite a few places you can find beautiful examples of shakkei design all over Japan, most of which are located in the Kansai region. Here are a few to add to your travel bucket list: 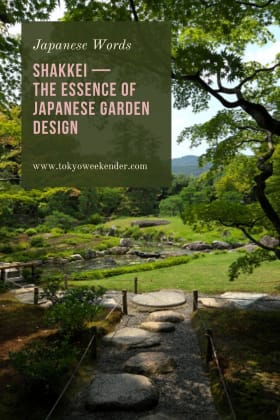