I have a sweet tooth, and I’m certainly not the only one who reaches for the dessert card at the end of a meal. If nothing suits my craving, I can always count on picking up something at the convenience store on the way home. It might come across as gluttony, but this yearning for treats seems to be so common in Japan that there’s an expression for it: 甘いものは別腹 (read amai mono ha betsubara).

In English, we have a similar expression: “There’s always room for dessert,” but as it goes with tsudoku, the subtext is quite different. What’s the fun of language-learning if not learning about the etymology of its strangest words? The word betsubara (別腹), composed of betsu (separate) and bara (stomach), literally says that your body has a second stomach for sweets. While betsubara is often used in reference to fruit parfaits, ice creams and other sugary things, you can also use the expression to talk about other food cravings. For some, it might be pizza; for others, it might be ramen.

The expression hits the soul of foodies so accurately that betsubara has become the discussion topic for online forums. On top of that, there are users asking whether or not the expression is based on fact. I was flabbergasted when I read further that, in a way, it is.

Anatomically, we’re talking about the only stomach humans are born with (in most cases), but one interesting theory offered an explanation as to why desserts and sweets often end up in our plates at the end of a meal in Japan. It’s all about maintaining your stomach’s figure.

When it comes to Japanese food, many of the same ingredients are used across various recipes. Soy, mirin and sake are at the heart of any good Japanese dish. They are sweeter than most spices you’d find in North America, for example. It just so happens that sugar, like other carbohydrates, helps maintain the elasticity of your stomach. Adopting a sweeter diet means that you’ll need to eat a little bit more sugar to feel full. Another important thing to consider is that portion sizes in Japan are significantly smaller. This means that those who might need a bit more to feel satisfied can comfortably go for an extra lava cake or ice cream cup to reach their second stomach’s sweet spot (pun intended).

Of course, language is constantly evolving and before betsubara was adopted as a popular saying, the word had a completely different definition. Sticking with the literal description of a separate stomach, some theories claim it was used to refer to a child or sibling born from a different mother. Who knows what it’ll refer to next? 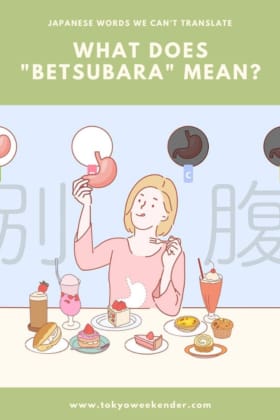