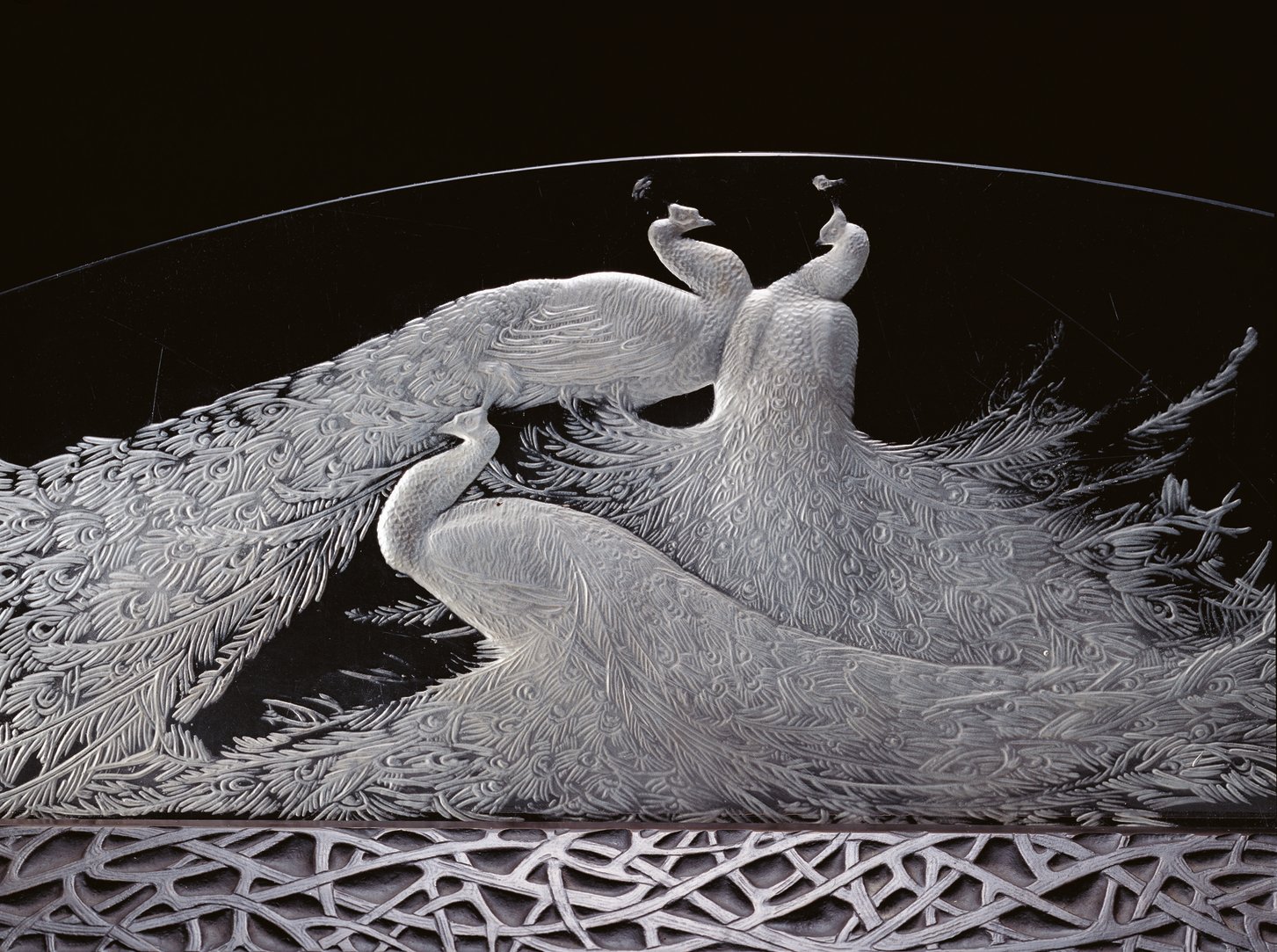 The Art Deco movement of the 1920s and ‘30s came at the height of the French colonial empire when 10 percent of the world was under the control of France, and goods, materials and new forms of art were flowing into the country from Africa and Asia.

Along with this return to the au naturel came an appreciation for the purity of the male and female nude form, perhaps most readily recognized in Paul Manship’s bronze Prometheus sculpture at New York City’s Rockefeller Center.

One of the most prominent artists of the Art Deco movement was French glassmaker René Lalique, whose work not only embraces the Japanese and Chinese landscape imagery preferred by Art Deco artists, but also the nude form.

When Prince Asaka Yasuhiko built his Tokyo residence in 1933, he commissioned Lalique to design the entrance doors, one of Lalique’s largest works in existence. His original etchings for the glass doors included four nude goddesses in classic Greek style. When the completed doors were delivered to the Art Deco manor in Shirokanedai, the goddesses arrived fully clothed.

Technically, Lalique’s original drawings for the doors are now on full display in the annex of the Tokyo Metropolitan Teien Art Museum as part of the current exhibition, René Lalique – Modernity and Elegance: Art Deco Glass from the Kitazawa Museum of Art Collection.

On Display at Tokyo’s Lalique Exhibition

The bulk of the immense collection of Lalique glassware, a total of 220 pieces chronicling the artist’s career, is showcased inside Prince Asaka Yasuhiko’s former residence, which is now the Tokyo Metropolitan Teien Art Museum (the annex was opened in 2014).

On display is a large collection of Lalique’s famous glass hood ornaments, once the ultimate status symbol for Rolls Royce and Bentley owners worldwide. The husband of the prince’s oldest sister, Marquis Nabeshima Naoyasu, owned one of Lalique’s striking car mascots.

There are elegant vases designed with kingfishers, dahlias and goldfish that could have come straight out of a Kuniyoshi ukiyo-e print. While Lalique never stepped foot in Japan, the Japonisme influence on French art was prominent early in his career, and his subtle, delicate nature scenes are reminiscent of Asian artwork.

There are plenty of nudes as well. A master of optics, Lalique’s opalescent vase “Bacchantes” permutates with orange and blue hues when sunlight flows through the glass. The large round box piece titled “Two Sirens” is a beautiful blend of classic Greek form, modern Art Deco style and Lalique’s masterful skill.

Mesmerized with the effects of electric light, Lalique created the centerpiece of the exhibit – a table centerpiece titled “Three Peacocks” – by plugging in the sculpture, and illuminating the chemically etched, gorgeous nature scene from beneath.

Who is René Lalique?

A gifted goldsmith, Lalique apprenticed with Paris’ top jeweler as a teenager and early in his career he designed avant-garde jewelry for Cartier, Boucheron and others, winning the Grand Prix at the 1900 Exposition Universelle in Paris.

He became fully committed to glassware in his 40s, and in true French Art Deco style Lalique worked mainly with unembellished, transparent glass, with a desire to produce art for the masses. His first collaboration was creating bottles for French perfumer François Coty, many of which are on now display in the royal family’s former smoking room.

By the 1920s Lalique was receiving commissions from around the world. In 1921 Crown Prince Hirohito brought the first Lalique to Japan (a vase – “Parakeets” – also now on display).

Prince Asaka Yasuhiko studied military tactics at the École Spéciale Militaire de Saint-Cyr in France. He was involved in a serious automobile accident and his wife moved to France to tend to him until he recovered from his injuries. They became enamored with the Art Deco movement and attended the 1925 International Exhibition of Modern Decorative and Industrial Arts, where Art Deco was introduced to the world.

One of the landmarks of the exhibition was the “Source of the Fountain” sculpture built outside the René Lalique Pavilion. Lalique stacked individual statuettes 15-meters-high and jets of water criss-crossed around the illuminated glass structure.

When the royal couple returned to Japan they commissioned Henri Rapin to design the interiors of their new residence, and Lalique to create custom glasswork, including the main doors and several light fixtures, including three lamps adorned with pineapples and pomegranates hanging aloft in the main dining room.

At the end of the dining room, underneath the Lalique lamps, is an elegant setting of tableware the artist titled “Nippon.” The cone-shaped glasses are simple, the beaded texture at the base of the cups matching the design of the candlesticks.

The plates are etched with simple stocks of rice, the grains fully ripe, a symbol of the pure and fruitful marriage between Japan and the Art Deco movement’s preeminent glass artist.

The René Lalique – Modernity and Elegance: Art Deco Glass from the Kitazawa Museum of Art Collection is at Tokyo Metropolitan Teien Art Museum was unfortunately canceled.