As we embarked from Utsunomiya Station we were greeted in the street by four gyoza restaurants. The Tochigi Prefecture capital of Utsunomiya, just a 50-minute ride from Tokyo Station on the Tohoku shinkansen, became famous for its gyoza after soldiers returning from World War II brought the Chinese dumpling home with them.

While gyoza restaurants are abundant in Utsunomiya, the city is world-renown for Oya stones, igneous rocks found only in the nearby town of Oya. Because of its rich past, Utsunomiya has been designated as a Japan Heritage cultural property by the Agency of Cultural Affairs, a distinction given to Japanese tangible and intangible cultural properties and assets with regional histories, traditions and customs passed down for generations through narratives. More than 15 million years ago the Utsunomiya area was under the sea and the massive impact created by volcanic eruptions melded the sea water, ash and minerals to form the Oya stone.

These chalky white stones, a building materials that has been used throughout Japan for centuries, gained international attention when Frank Lloyd Wright fell in love with the texture and used it as the facing of the Imperial Hotel in Tokyo, which some consider to be the American architect’s masterpiece.

Wright was so enamored with the Oya stones – its malleability gave the stone versatility – that when he was denied ample supply, he bought a local mountain to mine his own Oya stone, a local peak now referred to as Hotel Mountain.

As we made the drive from Utsunomiya to Oya we passed by gardens lined with Oya bricks, sculpture studios adorned with decorative lanterns and other home décor crafted from Oya and a small shrine built into the mountainside complete with a torii gate made from Oya. As we rounded the final curve to the Oya History Museum, we were greeted by white-faced cliffs streaked black like zebra stripes. The Oya History Museum is at the site of the gigantic underground mine where, starting from a century ago in 1919, more than 10 million oya stones were carved out and shipped all over Japan. The astounding caverns that average 30 meters in height (60 meters at their tallest) are perfectly square as originally the miners carved out the blocks, as large as 150 kilograms (or the same weight as a sumo wrestler), using only a pickaxe and hauled them out on their back.

During World War II the caverns were expanded even further to be used as an underground warehouse and airframe factory. Following the war mining continued and machinery introduced, and the history of the mine is literally written in the walls. This timeless memorial to Japan’s unique history is an eye-opening experience, and today stages wedding ceremonies, Noh theatre performances and even the singer Enya’s Christmas concert. 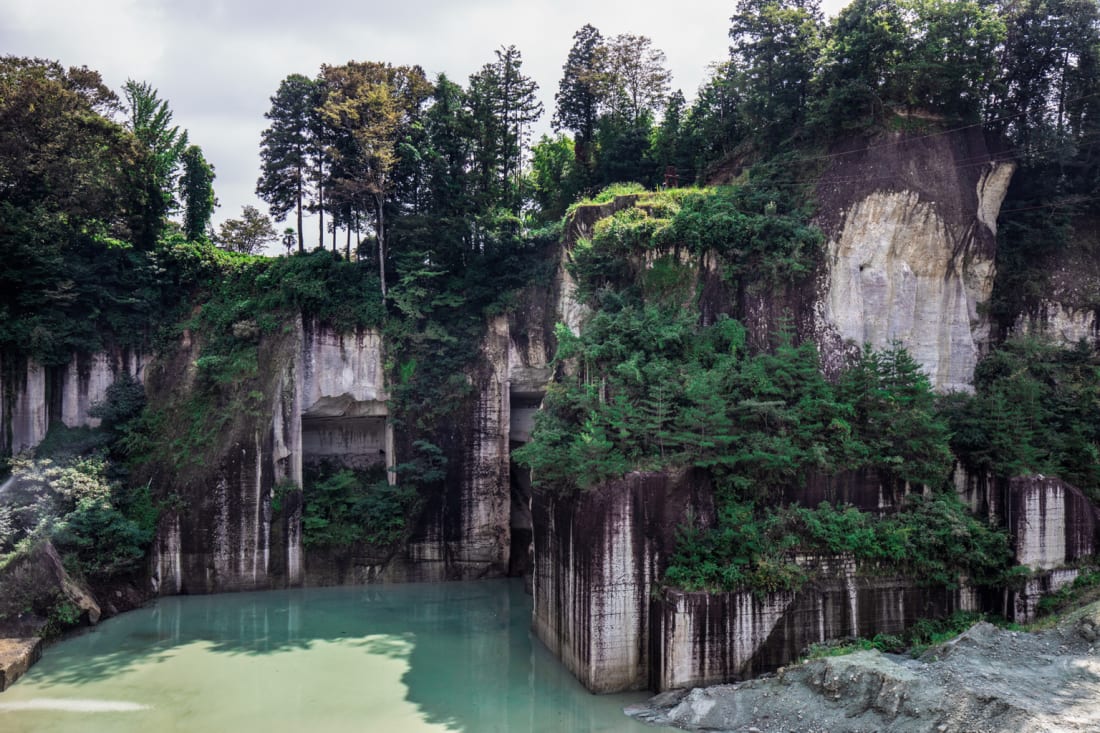 From there we experienced a brighter, sunnier version of Oya mining at the Kanehon Mining Site. Water gushes into the quarry lake and excavators continue to move stones at this active, family-run operation, which is now open to visitors on weekends. Guests can make homemade pizzas in Oya stone, wood-fired pizza ovens and enjoy them at an outdoor café space overlooking the quarry.

One of the nice things about visiting Utsunomiya is the landmarks are rather close together and within minutes we arrived at the historic Oya Temple. The temple is approximately 30 kilometers from Nikko, the final resting place of Tokugawa Ieyasu. His daughter Kamehime mourned her father’s death while convalescing at Oya Temple, and the Tokugawa ensignia is clearly marked at the temple entrance.

The temple was built in 810, but the area’s history goes back even further. Pre-historic humans lived in the mountain caves behind the temple during the Jomon Period, and the skeleton of a young man believed to be 11,000 years old was unearthed on site, and is on display at the temple’s treasure hall.

Before the temple was built, 10 Buddha images were carved into the natural caves on the temple grounds. The principle image, the Senju Kannon, is the oldest such carving in Japan. Appearing in high relief on the stone wall, the sculpture was originally coated by vermillion and gold leaf and would have shimmered in the sunlight.

The artist is unknown though some speculate it was Buddhist leader Kobo Daishi, while others say it might have been an Aghan priest who traveled on the Silk Road. A Symbol of Peace

A short walk from Oya Temples brings visitors to the Heiwa Kannon, a much more modern, and taller version of the Buddhist deity representing the desire to save mankind. A local stonemason began carving the 27-meter tall statue following World War II as a symbol of world peace.

When he ran out of resources, local townspeople took up his cause and enlisted a Tokyo University of the Arts professor to act as advisor, and the looming figure of the goddess of mercy was consecrated in 1956. Produce That Packs a Punch

While gyoza can be found around every corner in Utsunomiya, so can local Tochigi Prefecture produce, and the vegetables farmed here are renowned for their vibrant flavor. Osharaku Restaurant, housed in a former municipal pawn shop built in 1938 completely from Oya stone, serves a complete course highlighting fresh produce, such as tempura green bean, red pepper and kabucha and a green salad with crunchy lotus root. The Church of Oya

Our next stop was the Matsugamine Catholic Church. Built in 1932, Swiss architect Max Hinder designed the church to be built with reinforced concrete and then covered the entire façade with Oya stone.

The church’s third priest hailed from the same hometown in Iwate Prefecture as writer Kenji Miyazawa. Located on the left side of the church is a frog gargoyle wearing rubber boots in homage to one of Miyazawa’s more popular tales. 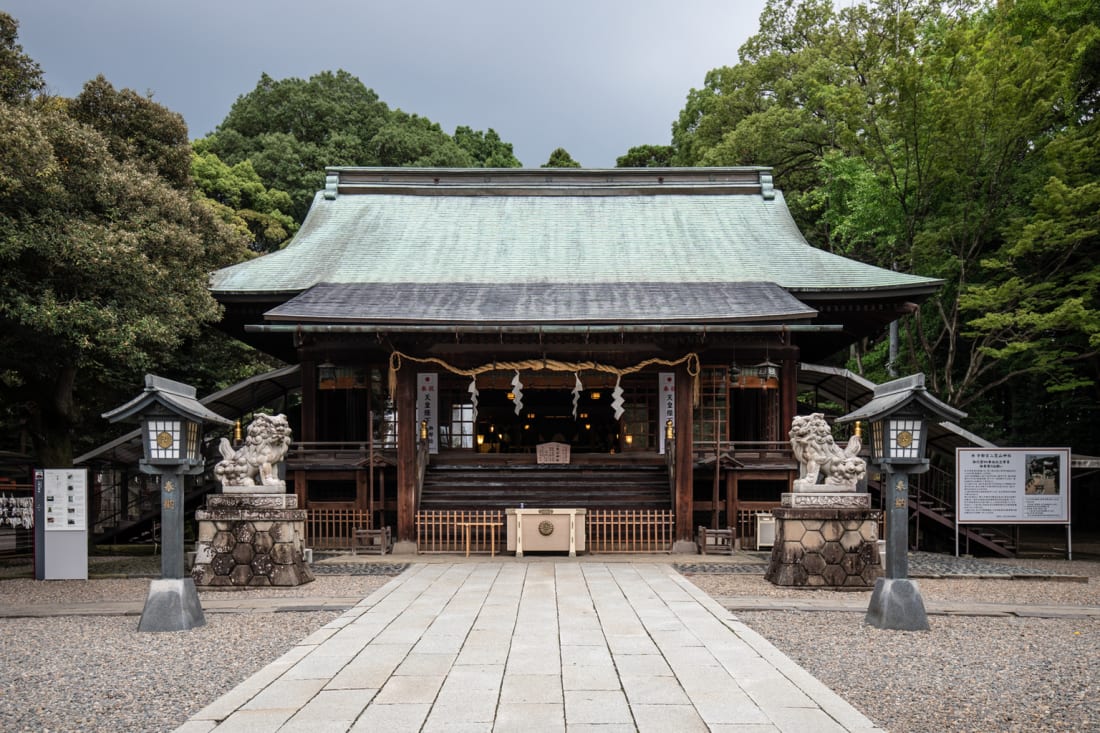 Just an Oya stone’s throw away is Futarayama Shrine. The main shrine of the Utsunomiya area, Futarayama was built on the top of Mount Myojin 1,600 years ago. The shrine has been burnt down four times since, and all present buildings date back to 1877 after the shrine was destroyed during the Boshin War. The immense stairway leading through the torii gates at the bottom of the hill head directly toward Tokyo.

Our final stop of the day was the Minami-utsunomiya Stone Storehouses located near the Babe Ruth station, a small station built especially to accommodate the famous baseball player’s 1934 barnstorming tour of Japan. The antique warehouse made completely from Oya stone has been modernized and now includes a dance studio, photo studio and French bistro. This hybrid of old and new Japan would excite contemporary designers, even Frank Lloyd Wright.