As is the case with many languages, some words are easier to pick up than others, no matter how complex they might be. しょうがない (read shouganai) is one of them. You might have heard it muttered by a winded salaryman after the train doors close just before he can leap in, or a mother trying to console her child who just dropped his chocolate ice cream on the sidewalk. I like to think of it as the “sigh” word because that’s usually how it comes out when I say it.

Despite generally classified as N2-level vocabulary across several Japanese Proficiency Test online resources, the word itself is quickly adopted by language learners across the globe. Shouganai is deeply rooted in daily conversation, and rare are the days where it’s left unsaid. Like much of the Japanese language, there are different ways to say it depending on who you’re with:

• Chilling with your friends on the weekend? Stick to the classic shouganai.

• Going over your next proposal with the CEO? Level-up to 仕方がない (read shikataganai). You can even substitute that last part with ありません (read arimasen) if you’re wearing your fancy pants.

• Having (and spilling) tea with the Emperor? Switch to 致し方ない (read itashikatanai) so as to humble yourself.

Unfortunately, the expression is also often misused by Japanese language learners without knowledge or consideration for everything it stands for. The most common English translation is “it cannot be helped.” It’s a faithful literal translation that carries the meaning of the original orthograph 仕様がない (read shiyouganai), but it doesn’t evoke the real meat of the word. 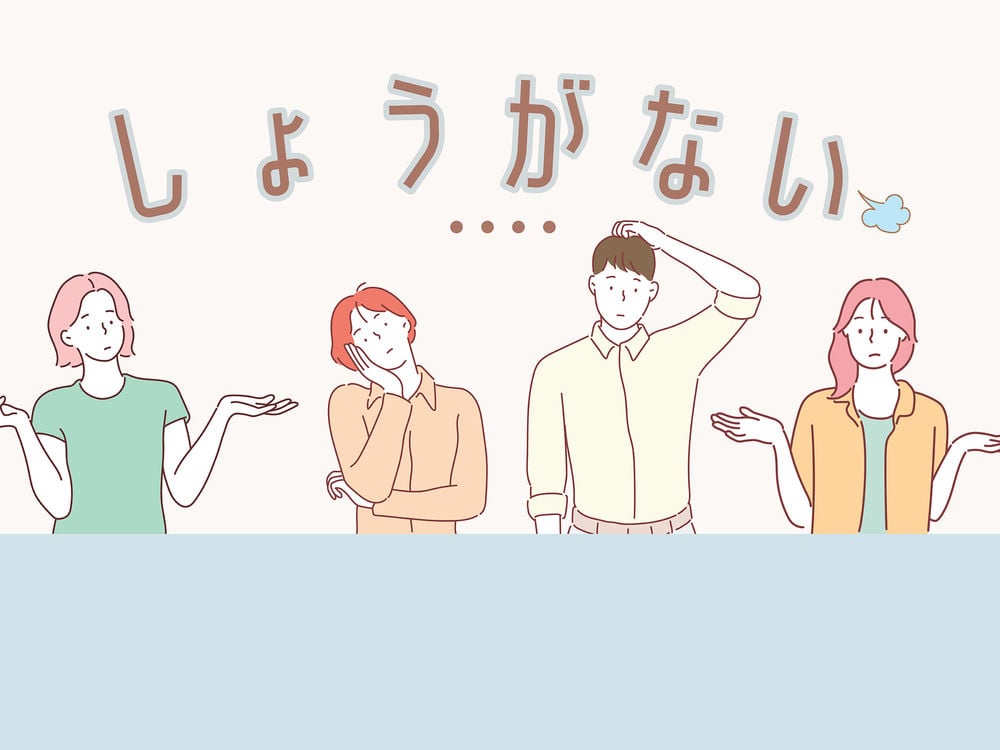 Shouganai is an underlying mentality generally shared among Japanese people that comes down to control of a situation, or rather lack thereof. Situations that call for the use of the word should be the ones you have no control over, like if you got caught in the rain without an umbrella. It’s unclear whether you can trace it back to Shintoism or Buddhism, but at the heart of shouganai is the reminder that while we can’t control our environment, we can control our reactions to unfavorable situations.

This, of course, isn’t unique to Japan. Many have compared shouganai to “sh*t happens” and “no worries” attitudes in North America and Europe. But that’s just it: shouganai isn’t an attitude.

Shouganai the mentality can bring a good, dare I say healthy, perspective on things. Accepting that some things aren’t in your control can be quite relieving for some. When you have to deal with the city ward office, and there’s a long wait ahead of you, it’s shouganai. Why worry and waste energy on something you can’t do anything about? Might as well bring a book and make the best of that time. Many, however, link various Japanese sociological issues to the shouganai mentality. It can be frustrating to hear so often, and in the eyes of the world, it might come across as cowardly or pessimistic. An extreme example would be a woman getting groped on the train. “It was rush hour, shouganai.” There’s no use telling authorities because they’ll likely not be in her favor or they wouldn’t know how to approach such a problem. Others link shouganai to the low voting rates in the last few years, stating that the Japanese population distrusts their government so much that they shouldn’t even bother to try and voice their opinions.

It’s not an unsupported argument, and it’s certainly interesting to think something would have such a noticeable effect, but the reality is far more complex, isn’t it?