Rediscover the Best (and Worst) of Godzilla

Godzilla, as a character and a franchise, has been around since Elvis Presley recorded his first song. Japanese filmmaker Ishiro Honda’s creation originated the genres of kaiju and tokusatsu movies, starring skyscraper-high monsters and the overzealous use of special effects. As directors passed the torch over the last seven decades, technology improved and sociopolitical climates changed. As such, the image of Godzilla adapted, giving the iconic creature a new makeover in each go-around. To celebrate a true Japanese icon, here is the best (and the worst) of the king of the monsters.

It’s hard to dismiss or bash the very first Godzilla movie. Released in 1954, the monster’s first appearance is in black and white, played by a Katsumi Tezuka in a rubber suit. An enemy of that stature and nature was completely distinct from the popular science-fiction movies of the decade. The unambiguous plot focuses on the rampage and damage; a simple and effective formula that came to be the kaiju genre standard. Right from the beginning, Godzilla isn’t an alien or a fantastical beast, but rather the product of man’s thirst for nuclear power, a touchy subject during the Cold War and one that Japan knows all too well.

The Showa Era saw many sequels and spin-offs after the roaring success of the first movie. Many introduced new giants to fight Godzilla, whether they are man-made or traveled from a different galaxy.

Son of Godzilla, however, was produced to appeal to younger audiences and reveals a softer, more emotional side to the monster, who comes to raise a child named Manilla. While there were certainly good intentions with this film, especially with it touching the subjects of bullying and father-son relationships, there are quite a few questionable scenes, notably one where Godzilla threatens to hit Manila for not being able to produce his atomic ray on the first try.

It is generally agreed that this film is one of the worst in the franchise. The plot is non-existent and involves little to no bashing of skyscrapers or setting cities ablaze. The reception of this movie was so bad that Manilla only had one more appearance before being abandoned in favor of more his popular brethren, never to be seen again.

Roughly half of the films that constitute the franchise feature Godzilla fighting other radioactive beasts, mecha robots and aliens. Entering the Heisei Era, Godzilla films dove into more details about its origins and questioning the morals of genetics, all while rebooting popular combats between giants. Everybody is entitled to their favorite but King Ghidorah, an armless, three-headed flying dragon with many variations, ranks highly among die-hard fans.

In the 1991 Godzilla vs. King Ghidorah, the plot relies heavily on the use of time travel to explain the strange origin of the two monsters, revealing that Godizilla is actually a dinosaur that mutated through exposure to nuclear radiation. While the movie makes us suspect that the monster might be on Japan’s side this time, with one of the most poignant scenes in the franchise, we see that it, in fact, only lives for destruction and, in a way, to punish the Japanese corporations for their greed by annihilating the symbol of Japanese prosperity: Tokyo.

The One that Stole Our Hearts: Shin Godzilla (2016)

The 29th Godzilla produced by Toho brings back and introduces a healthy mix of classic and new elements. Starting off the post-millennium period with a design that honors Katsumi Tezuka’s original rubber suit, it also incorporates new features to Godzilla that caused quite the reaction when the movie was first released in theaters.

The film includes the requisite battles between the beast and military forces, who in addition to blasting our anti-hero with standard tanks and bombs, try to stop Godzilla through ingenious tactics. We see them direct JR trains towards the monster’s legs, and use cranes to pry open his mouth in order to fire directly into the source of the devastating atomic breath. There are many, many political meetings over how to beat the giant throughout the movie, providing scathing insight into how the Japanese government would realistically react to a threat this size.

What makes this one the top 5, if not top 3, best Godzilla movies is the emotion generated through the scenes of destruction. The dramatic music (classic Hideaki Anno) and the simplicity of the shots make the fall of hubs like Shinbashi and Ginza heartbreaking moments for any Tokyoite.

JJ Abrams’s first installment of the Cloverfield anthology isn’t technically a Godzilla reboot like the 1998 or 2014 films, but it’s definitely inspired by TOHO’s legacy and is arguably one of the best American productions that fall into the kaiju genre. Despite the hand-held camera aspect of this film (which will induce motion sickness at one point or another), the technique allows the viewer to witness the attack of New York City from the pedestrian point of view – one of the aspects that made the original Godzilla a groundbreaking piece of cinema. With its origin purposefully left out of the narrative, the film focuses on the pure destructive nature of the beast, the simple element that draws spectators to watch Godzilla over and over again. 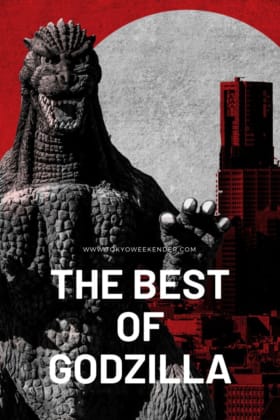