Move Over Kobe – Gourmands Are Heaping Praise on Hida Beef

Sushi always tops lists of hungry visitors to Japan, but Japanese meat is increasingly entering the spotlight – and that’s not only the tender pork atop ramen. While Kobe beef might instantly come to mind, the country boasts several renowned brands of wagyu (Japanese beef) that provoke fierce debate among gourmets as to which is the most delicious.

A contender for the top spot is Hida beef, originating from the mountainous region in the north of Gifu Prefecture in central Japan. In recent years, the brand has benefitted from the growing popularity of Takayama, renowned for its quaint old town. Yet, as picturesque as its streets may be, discussion of the merits of visiting often provoke a wide-eyed reverence from those people in the know. “But did you try the beef?” comes the response. One Bull to Sire Them All

There is no small irony that beef is reaching such acclaim in a country where meat consumption was considered taboo for more than a thousand years. It wasn’t until the arrival of the US military in the latter half of the 1800s that beef began to work its way onto plates. Even then, cows were still largely used for tilling rice fields. All this changed with mechanisation in the 1960s which transformed the view of cows from machines to meals, sparking efforts towards improving rearing methods and meat quality. From tentative tastes to training up masters, in less than a century, Japan’s relationship with meat radically shifted.

The first ever national beef competition known as the Wagyu Olympics was held in 1966 and different regions began to establish their own brands. The origins of Hida beef are attributed to one heroic stud: Yasufuku. Brought to Gifu from Hyogo Prefecture in 1981, he is said to have sired around 40,000 offspring, several of which won critical acclaim at the Wagyu Olympics for meat quality. With a record like that, he definitely earned his title of “Father of Hida Beef.” 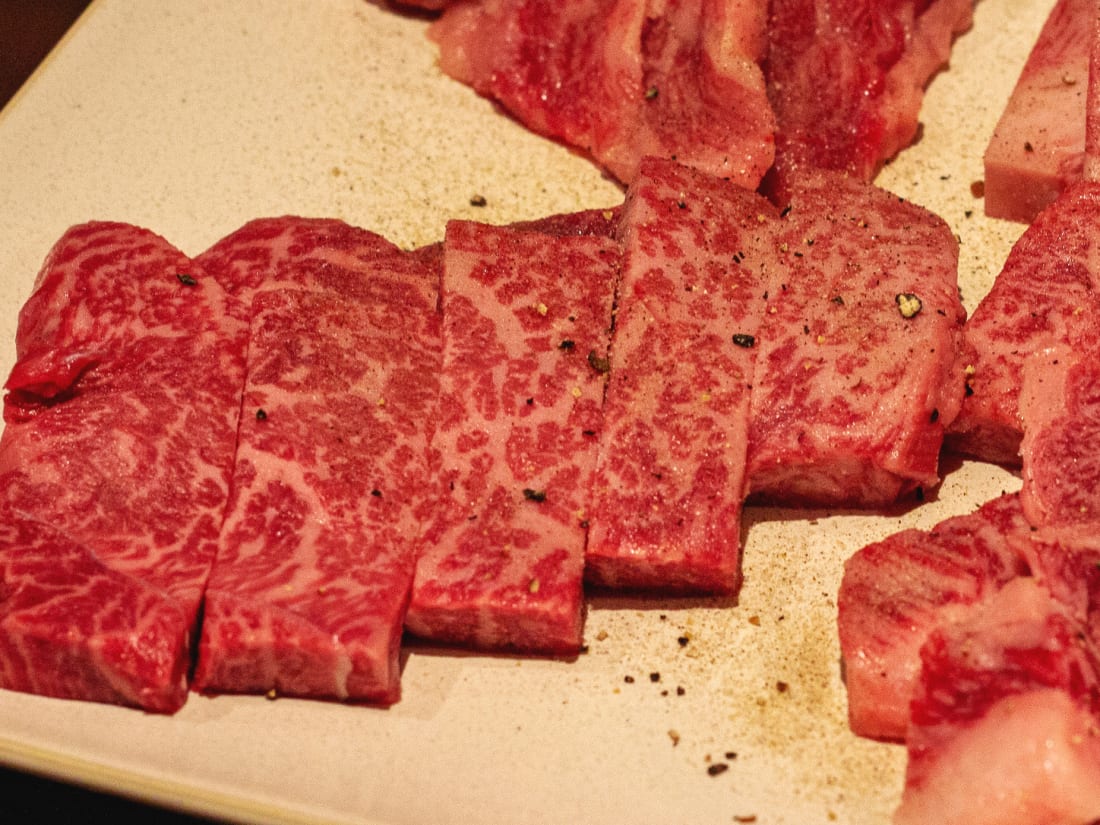 All meat is subject to strict criteria before it can be certified as a wagyu brand. For Hida beef, a cow must be raised for the longest time in Gifu Prefecture, fattened by an accredited producer, come from a black-haired Japanese cattle breed fattered for at least 14 months, and earn a meat quality grade of 3, 4, or 5 from the Japan Meat Grading Association.

While all this sounds very technical, it’s best to just accept that Hida beef is really, really good. Conversation-stoppingly good. Whereas Kobe beef aims for a strict balance between akami (red, leaner meat) and shimofuri (fat marbling), Hida beef tends to have a greater amount of shimofuri, making it extra juicy, tender and giving that true melt-in-the-mouth experience. In recent years, Hida beef has take home top honors at the Wagyu Olympics in both the bull division and the meat division. Proof is in the Pudding

To sample this award-winning beef for yourself, the best place is, of course, Takayama. It’s impossible to wander its narrows streets lined with old houses without catching the faint whiff of beef in the air. Beef on sticks, steamed beef buns and beef croquettes are available from ubiquitous take-out shops. Beef sushi is also on the rise. Kotteushi offers various kinds, including the ever popular three-tastes set, which includes a maki-roll with a picture-perfect egg yolk, all served on a sembei (rice cracker) as a plate.

The best way to truly appreciate the range of flavors and textures of Hida beef, however, is to go for a full yakiniku (Japanese barbecue) meal. Seat yourself around a grill and order a variety of cuts to compare, with accompanying vegetables (clearly for health, that you cook to your liking. Be sure to try calbi – Korean-style thinly sliced rib meat – and the soft yet irresistible harami (diaphragm). Restaurants get very crowded, with queues of 1.5 hours not uncommon. Visit Ajikura Tengoku – literally “Taste Warehouse Paradise.” Although popular with tourists, it also meets high approval from locals. Moreover, it does indeed produce a near-religious experience through beef almost too delicious to be real. After trying Hida beef, there is no going back.