A Day in the Life of Ladybeard, the Cross-Dressing Pro Wrestler

At the eighth circle of hell Dante laments the sight of the blind oracle Tiresias, whose head was wrenched backwards in a fit of palsy. Says Dante’s guide, the philosopher Virgil, “Here pity only lives when it is dead.”

The same could be said for those who enter the Makai wrestling ring. Like the sinners of Dante’s Inferno, the characters of the live-action series that blends visual kei heavy metal with professional wrestling are historical figures from Japan’s past who have been cast into hell, or in this case, the Makai realm.

On a recent Friday night the standing room-only crowd at 1st Ring in Shin-Kiba snaps smartphone photos of the 16th-century sorceress pirouetting about the stage as a guitarist shrouded in black serenades her with a wailing solo. Former pro wrestling champion Yuji Hino, portraying samurai insurgent Taira no Masakado, bodyslams an onslaught of attackers. “This whole thing is like an anime come to life,” says Ladybeard after the show. “To me, there is everything that I enjoy wrapped up in one package.”

Ladybeard, AKA Richard Magarey, reached viral status online in 2015 as the frontman of Japanese kawaiicore band Ladybaby. Prancing in a maid outfit and delivering guttural screams alongside his teenage bandmates, his Youtube video reached one million views within two days.

Today the native of Adelaide, Australia, tours with this new band, Deadlift Lolita, and makes public appearances around the world. He joined Makai, the brainchild of writer and director Akito Manabe, in 2016.

Ahead of the Makai performance, Ladybeard’s Luís Fróis makeup is applied by a makeup artist who has a deep scar etched from his cranium to ear lobe. A fellow wrestler is napping on a nearby bench.

“That’s the life of a pro wrestler,” says Ladybeard, who, while affable and accommodating, is liable to break into the song “I’m Too Sexy” by Right Said Fred at a moment’s notice.

Even though he has a 5am flight the next day for a three-day DJ stint in Hong Kong, Ladybeard sits down with TW to chat about the mercurial life of a heavy metal-singing, cross-dressing professional wrestler. How did you get involved with Makai?

They needed a foreigner and I think at the time there were only about three people that could possibly be a candidate. I was one of the only few options. So I came and I watched and I was like, “That is one of the most insane things I have ever seen.”

What was the appeal to you?

I like that it’s unconventional pro wrestling. For me, pro wrestling has always been about theater and storytelling. In Japan, pro wrestling is generally treated as a sport. To find something like this where it is unashamedly and unapologetically theater is really ideal. Before I was a pro wrestler I was a stuntman and a martial artist. And before I started any of this, I was an actor in the theater. So really the whole thing is made perfectly for me.

What is life like for professional wrestlers in Japan?

It’s a pretty rough life to be honest. You saw the level of intensity of the physicality that goes on tonight, so if you are a full-timer you are doing that more or less every day. I only wrestle once a month, twice a month maybe. So I have time to recover. The guys who are here every day – you are hitting that mat over and over. Your body is knackered.

When you were performing with Deadlift Lolita, you cracked open your head [doing a backflip off the stage]. Have you had any other serious injuries?

Not dramatically. I stopped pushing my limits for that reason…. When I was younger, I used to have a lot more injuries. I would push myself more freely and openly. You get injured and you don’t really mind…. Nowadays I don’t push myself nearly as much as I used to, because if I get an injury, then I can’t go to work at all. That’s tough times.

How do you take care of your body?

Massages are good. Sleep as much as possible in beds. A lot of the time I am sleeping on planes and whatnot. It leaves my back and neck and everything ruined. It’s tough. When you get busy you surrender to the fact you are going through a period when you are going to be in pain, and that’s just how it is. 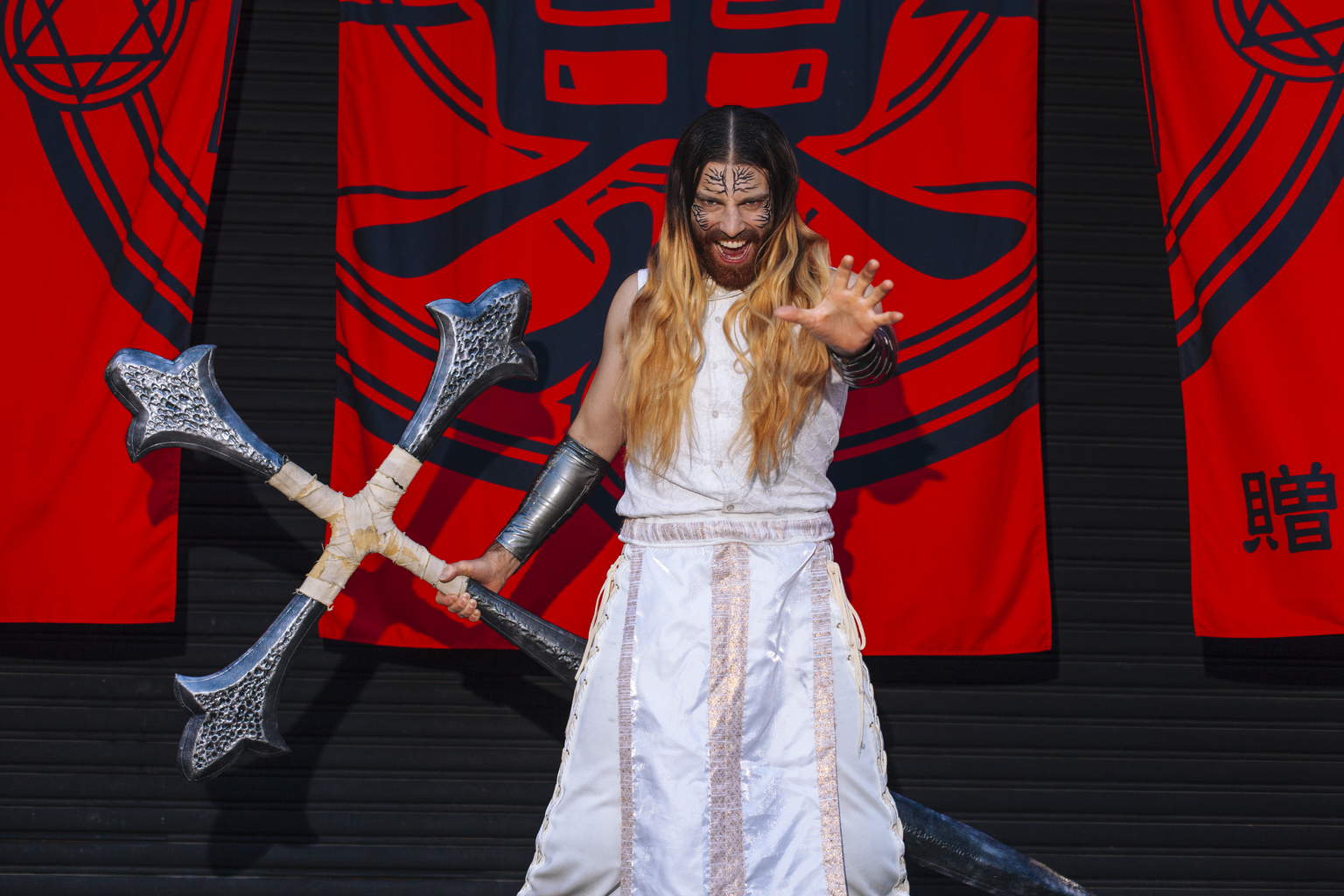 How often do you travel?

Obviously it varies, but I am usually traveling for work. My biggest market is China. I am currently DJing a lot in China. Back and forth from China all the flippin’ time. Around the world I do a lot of anime conventions.

How has your reception been at anime conventions?

It’s great. I feel I am very lucky, because a lot of those kids, a lot of the Western otaku kids, who love anime and manga and Japanese culture in general, I feel like I am kind of living their dream. All of them want to come to Japan and have some insane, only-in-Japan career. I am totally doing that.

What is next for Ladybeard?

Right now, more Makai in Japan, a whole lot of DJing in China, and then there’s some big, big stuff happening later this year with any luck. I do need to plug this – just announced – I will be emceeing Metal Matsuri in London in October. That is the first Japanese heavy metal music festival outside of Japan. Apart from that I got Anime Midwest in Chicago, I’ve got J’Fest in Mexico, I’ve got Anime Friends in Brazil and hopefully some more bearded madness happening toward the end this year.

Ladybeard, is that ever ending? Is that going to be on your tombstone?

To the moon, my friend. To the moon. Now Ladybeard is a global brand. I want to expand my overseas networks as much as I can, so particularly America, the UK, Europe… But ultimately Hollywood. Ladybeard action films is where it’s going to be. Ladybeard versus the zombies. Ladybeard versus the vampires. In my opinion, a jacked-up, bearded hairy dude in a bikini fighting vampires, I don’t know how cinema gets better than that.

What are your career highlights?

The biggest highlight was when I first came to Japan and had my initial pop of fame on the internet. It had actually taken five years getting to that point. This career started in Hong Kong. I was living over there as an actor, stuntman and voice actor, and the global financial crisis came along and wiped out all my work. Overnight I was unemployed. That made it a necessity to try something else, because everything that had worked so far wasn’t working… Of course, a career as insane as this one, it’s rocky beginnings and slow starts. So to get to Japan and get that initial pop of fame, to finally get confirmation that I hadn’t wasted all my time and I wasn’t acting like an idiot, that was the most satisfying thing ever.

What are the challenges?