From around the middle of June each year, the convenience store shelves are hit with a wave of minty packaged treats

Summer time in Japan – hot nights, relentless humidity, the buzzing of cicadas, local festivals and … ‘chocomint’ confectionary. From around the middle of June each year, the convenience store shelves are hit with a wave of minty packaged treats and devout fans of mint chocolate anything and everything, begin to rejoice. This year has seen more mint madness than ever before. Far beyond the snack aisle and ice cream freezer, chocomint combos popped up in new and ingenious forms from limited edition Starbucks drinks to avant garde restaurant desserts, even choco minty bakery bread hybrids like bagels and melon pan.

Every manufacturer seems to want to take an icy shot at the season’s unofficial flavor, but how and why exactly did chocolate mint take Japan by storm? Technically, チョコミント (chocomint) refers specifically to flavors inspired by mint chocolate ice cream (or ‘mint choc chip’ if you prefer), and is therefore not necessarily inclusive of all chocolate products with mint elements, though the title is frequently used as a catch-all term anywhere the joys of chocolate and mint converge.  The current array of complex mix & match mint and chocolate consumables are presenting new variations which have drastically evolved, a far cry from the traditional humble scoop of ice cream – but that’s exactly where it all began.

Although it’s difficult to find a definitive history, several blogs speculate that chocomint was first introduced to Japan as a Baskin Robbins ice cream flavor back in 1974. Its popularity spread with the introduction of Glico’s ‘Seventeen Ice’, ice cream bar vending machines that were launched in 1985, aimed primarily at teenage girls. The nationwide availability of this new exotic flavor soon became a popular trend amongst youngsters and began a long-running discourse between fans and critics — love it or hate it, it was here to stay. 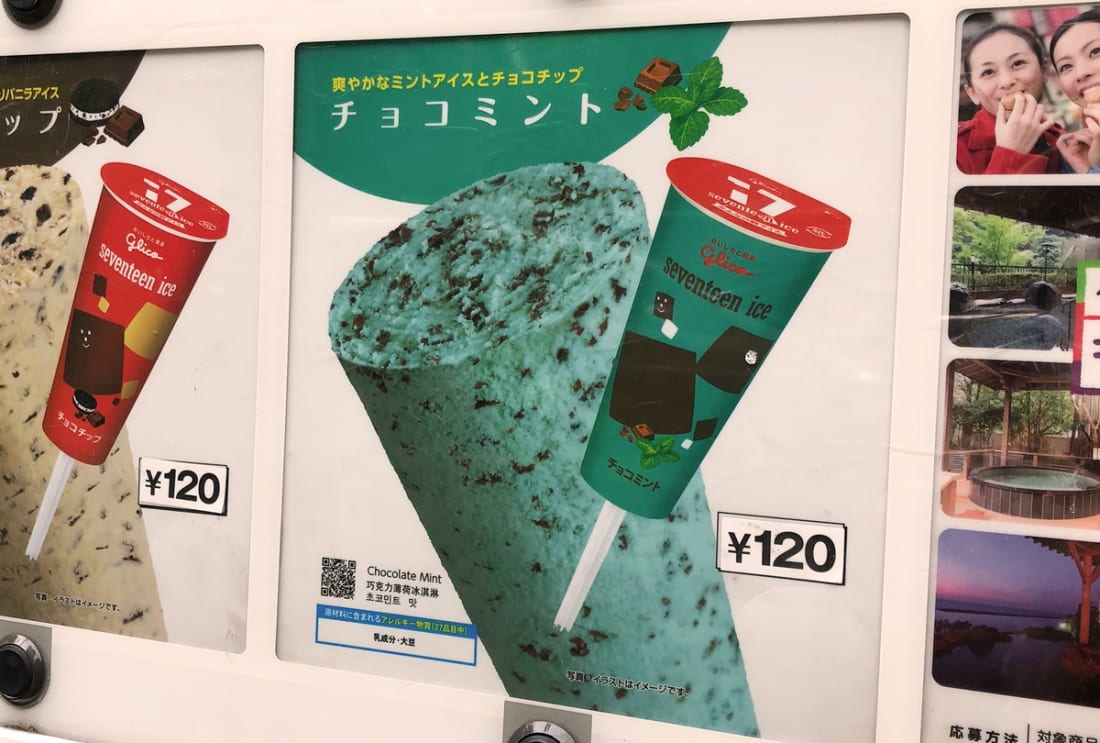 Mint and menthol are widely known for their fresh, sweet flavor and cool aftertaste, hence they make an obvious ingredient choice for a heatwave treat (if you’ve run out of mojitos), but perhaps there is an even more simple appeal to chocomint – its aesthetic. Rarely does a food or beverage have its own exclusive color palette, especially one as visually appealing at the iconic light but vibrant, mint green. I challenge you to look around you and find any item of the particular shade and not have ‘minty’ connotations spring to mind.

Not only is the chocomint color instantly recognizable, it has become synonymous with the addictive and refreshing coolness that is just what mint choc lovers can’t get enough of.  In the 80s and early 90s, this fresh hue was splashed across youth media and interiors, fresh sporty leisurewear and ads for summer vacations.  A few decades later and the same generation that grew up wearing those optimistic mint-tinted glasses are happy to see a nostalgic revival of their carefree youth and a new audience is equally charmed by the colors’ inherent and eternal mix of cute and cool. 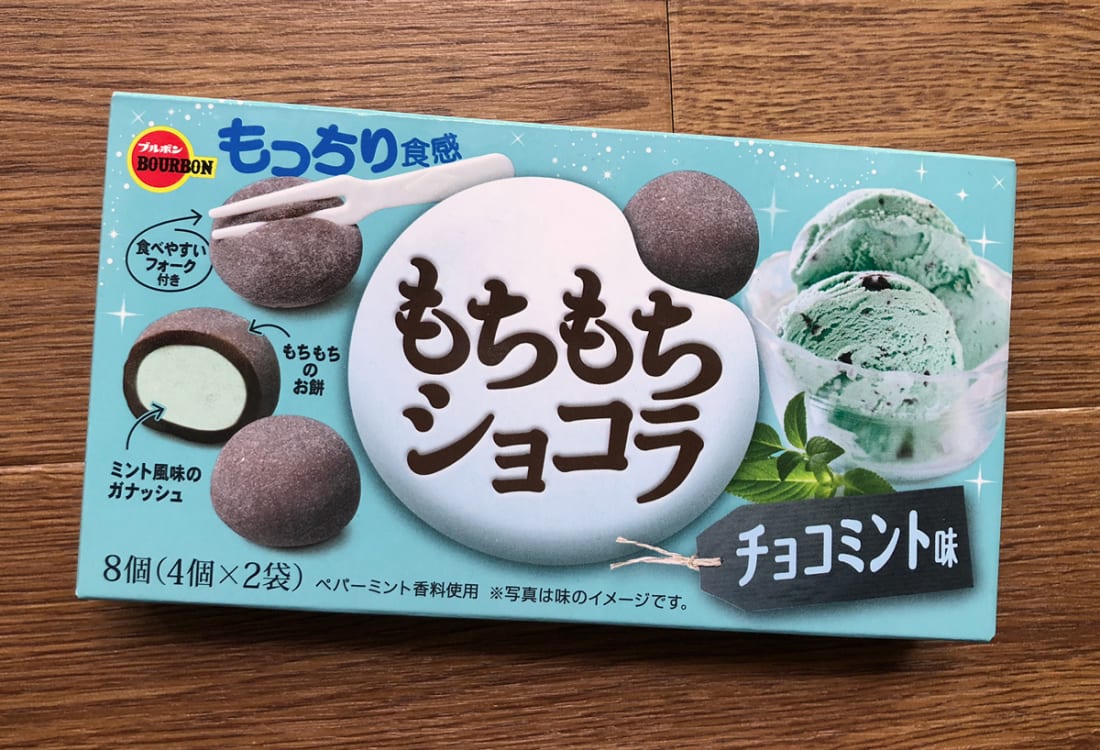 The single factor most responsible for the current skyrocketing number of chocomint goods on sale is, as is frequently the case these days, social media. That photogenic mint color brightens up an Instagram feed as it fits perfectly with a kawaii pastel palette or adds quirky charm to chic city neutrals. Various hashtags conveniently unite fellow fans and aficionados, who can share their latest discoveries and shopping hauls in real time. If you want to fully endorse your commitment, I particularly recommend the hashtag #チョコミン党 (choccomin tou), which is a pun on the last syllable, as ‘tou’ means (political) party. There are even accounts solely dedicated to reviews and recommendations of chocomint related items, further encouraging a nationwide treasure hunt as you scour your local stores, desperate to snap up that newly released chocomint mochi and upload a victory picture as soon as you possibly can. While not every experimental mint edition will be delicious, there is no real downside to the chocomint boom (when enjoyed as part of a balanced diet) unless you find yourself on the other side of the fence.  Social media also serves the anti-chocomint community as a place where they can freely complain about the mint invasion of their convenience store and comment “it tastes like toothpaste” on as many posts as they want. Personally, I imagine eating toothpaste is probably a far more unpleasant and very different experience but as they say, ‘one man’s meat is another man’s poison’, and I say that as a vegetarian.  If it’s not for you, that’s ok — each to their own.  You only have to put up with it for a few months a year and you can always give that ‘salty chocolate’ trend a try, or just hang tight until September, as Halloween pumpkin everything and a chestnut flavor bonanza are reliably guaranteed to hit the shelves soon enough.

If you’re overwhelmed with Chocomint choices, here are five our of favorites to satisfy your minty cravings or initiate you into the ‘Chocomint Party’

1 – Kaldi’s Chocolate Mint Drink – The import food store has brought out several of its own original chocomint lines but this thick and delicious milk drink is like a reverse chocolate mint ice cream shake, best enjoyed chilled.

2 – Gari Gari Kun Rich Chocolate Mint –  The popular ‘ice candy’ might have put some people off with some of it’s more unusual flavors (‘Neapolitan pasta’ or ‘corn potage’ anyone?) but the cool refreshing mint and chocolate flecks work perfectly with Gari Gari kun’s crunchy ice texture.

3 – Bagel and Bagel’s Chocomint Bagel – You maybe be skeptical about this one, but be brave, we discovered it was unexpectedly delicious when toasted with butter.  Previously available at Bagel and Bagel stores and stockists including Seijo Ishii.

4 – Mint Chocolate Pocky –  Convenience stores are overflowing with melty mint-injected chocolate options, but one of our personal favorites is the humble classic Pocky variety. Best enjoyed chilled from the refrigerator.