Singer-Songwriter HYDE: “I feel freer now than I did in the past”

“The most dramatic and beautiful collection of songs I’ve ever made.” This is how singer-songwriter HYDE describes his latest album, which is set for digital release in May 2019. The as of yet unnamed LP will be the influential rocker’s first record as a solo artist in more than a decade and his fifth in total (including a Greatest Hits album).

Born in Wakayama Prefecture in 1969, HYDE wanted to be an animator as a child before he started playing the guitar in his late teens. He rose to fame in the 90s as the lead singer of L’Arc-en-Ciel, a group who’ve gone on to sell a reported 40 million albums worldwide and remain the only Japanese band to have sold out New York’s Madison Square Garden.

In America, he’s probably better known as the frontman of VAMPS, a rock duo he set up with Oblivion Dust guitarist K.A.Z in 2008. His debut as a solo artist came seven years earlier with his first single “Evergreen” topping the Oricon chart.

“From a mental and musical perspective, I feel freer now than I did in the past,” HYDE tells TW. “When you’re in a band like L’Arc-en-Ciel there are limitations as to what you can do as a musician. Going solo for the first time in 2001, I thought I could be more expansive in my work, but I was inhibited by this desire to write songs that were very personal. Then with VAMPS, I felt the way I approached things was a little short-sighted. Things are different now. I’m doing the sound producing for the new album and I’ve put a lot of passion and energy into it. It has an explosive sound.”

“I feel freer now than I did in the past”

The opening single from the album was released last June. Sung entirely in English, “Who’s Gonna Save Us” is a track about a lawless society in which people are forced to protect themselves. The promotional video pays homage to Stanley Kubrick’s classic horror film The Shining. HYDE’s pronunciation on this track, as well as on the follow-up singles “After Light” and “Fake Divine,” has been praised by his fans who feel his English has significantly improved.

“Yes, I’ve read a few comments saying that which is nice,” he says with a grin. “When it comes to English songs, I give my ideas to a lyricist who turns them into something that’s intelligible. I then work with the engineer trying to perfect my pronunciation. It used to take me around six hours, whereas these days I do it in around two, so I guess I’m improving. [Laughs] It’s fine in Japan, but when I go on stage in the States, I need to concentrate to make sure I get the words right. It’s quite nerve-wracking.”

HYDE also sings in English on a special remake of Starset’s hit single “Monster,” the American band’s most successful commercial song to date. The song was used for the Japanese release of their second album, Vessels. It was initially released in October 2016, peaking at number 2 on the Billboard Mainstream Rock Songs chart. “I got to know Starset from festivals and we are also with the same management company,” says HYDE. “We traded data via mail. The engineer who recorded the song sent me the original master copy to lay my vocals on. It was fun to see how he processed it. We don’t usually get to observe that here. Even though we didn’t record together, I really enjoyed doing this track. Starset are an amazing band who I’d been following for a long time.”

Down the years HYDE has collaborated with many well-known groups and artists, the most recent being YOSHIKI from X JAPAN. The drummer, pianist and main songwriter of the country’s most famous visual kei rock band asked HYDE to provide vocals for “Red Swan,” a song he wrote for the Attack on Titan anime series. It reached the top 10 in the iTunes mainstream charts in 16 countries.

YOSHIKI then returned the favor, playing the piano on HYDE’s track “Zipang,” a title that refers to Marco Polo’s original description of Japan as “The Land of Gold.” His new album also features a B-side cover of Duran Duran’s Ivor Novello award-winning hit “Ordinary World.”

“I’ve known Yoshiki a long time but the first time we spoke properly was two years ago when he reached out to me to go for dinner,” says HYDE. “As with Starset, we sent each other material digitally. It was often chaotic as we cut it fine with deadlines, but I had lots of fun. For me, X JAPAN epitomizes rock music in this country. It was a real honor to work with him. He complimented me a lot as well, which I was very happy about.” [Laughs]

After “Zipang,” the next single to be released was “Mad Qualia,” a heavy, philosophical song used to promote the Japanese version of Capcom’s action-adventure hack and slash video game, “Devil May Cry 5,” which came out earlier this year. HYDE will perform the new track, as well as other hits from the new album as part of his US tour that begins on May 5 at the Welcome to Rockville festival in Jacksonville, Florida.

The annual event always attracts high-profile acts and this year is no exception with the likes of Korn, Rob Zombie, Judas Priest and the band HYDE is most excited about seeing, Bring Me The Horizon, all set to perform (unfortunately The Prodigy have been forced to pull out due to the tragic death of Keith Flint). A week later the Japanese vocalist will be on stage at the Epicenter Festival in Rockingham, North Carolina. It boasts a similarly stellar line-up that includes The Foo Fighters and Evanescence. HYDE is set to play a total of 13 venues in the States, most of which will be as the opening act for Maria Brink’s metal group In This Moment, though due to popular demand he also has three headline shows in Massachusetts, Chicago and Los Angeles. It’s the 50-year-old’s second international tour of 2019 following live performances in the Greater China region from late March to early April.

“It’s fascinating to see the contrasting reactions in different countries,” says HYDE. “In Japan, the fans tend to move and react together as one, whereas in China it’s more spontaneous and passionate. America also has a different vibe. This time, most of my shows in the States are as a support act so it’s a bit like an away fixture. People will be there to watch In This Moment. The challenge for me is to pull them into my world.”

The Wakayama native says that he found it difficult to express himself when he first performed in front of “away” fans in the States but is now used to it having toured for VAMPS alongside bands such as Danzig, I Prevail, and Nikki Sixx’s group Sixx:A.M. As for the headline shows, HYDE is most excited about the last one, which will take place at 1720 in Los Angeles on May 26.

“I’ve never sold out an LA venue before so this time I have to do it,” he says. “I think this tour will be better than any I’ve done previously. Last year, at the shows I did in Japan, the audience was really pumped up and at that point I’d only released a couple of singles. This time, those watching will be more familiar with the material and hopefully that will create a crazy atmosphere. It’s going to be lively.”

After his US tour, HYDE kicks off his Japan tour in Tokyo on June 22.
More info at www.hyde.com 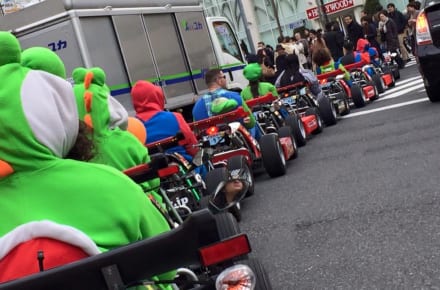