I am many things, but a vegetarian is not one of those things. I don’t look down on vegetarianism as a life choice – in fact, I think it makes a lot of sense, in terms of general health, the environment, and the ethical treatment of animals. But, quite simply, taking meat out of the equation for me has never been something I was willing to put on the table, so to speak.

So when I was offered the chance to try a new vegetarian course dinner at Two Rooms, I initially thought to pass on the opportunity. But two things stopped me: one, it’s rare for me to turn down a meal (full disclosure: I was able to try the course for free), and I was curious to know just what a vegetarian course meal would taste like.

Let’s just say I was pleasantly surprised. After making my way through the airy space of Two Room’s dining room in Omotesando, I was seated at my table and given a glass of Sauvignon Blanc, to accompany the first part of the meal. The next course was a rare surprise for a restaurant in Japan: Salt-Baked Beet Tartare. The dark red beets were topped with lily, black truffle, and kale, and underneath the chopped beets was a raw quail egg (the egg can be left out for vegan diners). The creation offered a unique balance between the sweetness of the beets that had been tempered with the salt and the rich, earthy – almost spicy – flavor of the black truffle. The third item on the course offering for the day was a Danshaku Potato Croquette, served with whipped avocado and a black garlic aoli. Now I’m the kind of eater who doesn’t mind a combini croquette now and again, but Two Rooms’ take on the classic was a real revelation. The croquette was the perfect blend of a crisp and crunchy exterior with a soft, creamy inside. The aoli and the avocado, which was blended with olive oil and lemon, provided a unique flavor to this satisfying dish. 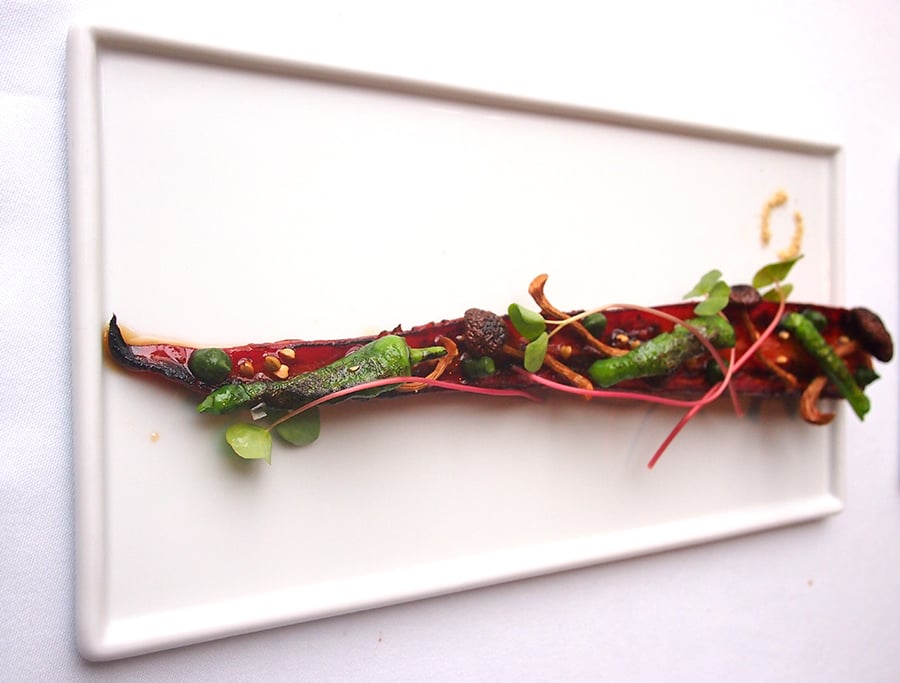 The main course was an entire Kyoto carrot, glazed with Kyoto black vinegar and caraway, and studded with yanagi matsutake mushrooms and shishito peppers. Again, as a non-vegetarian, I was surprised at first by the idea of a carrot as a main course, but it was a truly pleasant surprise. The carrot had an earthy, sweet flavor that was heightened by the black vinegar and bolstered by the richly fragrant mushrooms. It was paired with Two Rooms’ house Chardonnay, which was richly flavored, and had a delightful buttery finish.

Finishing off the meal was a sorbet accompanied by fresh seasonal fruits, which was refreshing and delightful.

And the end of the five courses, I had the pleasant feeling of being satisfied without feeling stuffed. And knowing that I had eaten a healthful meal was a definite plus. I found the course meal to be a pleasant change of pace from meat based meals, and it offered an extraordinarily broad array of flavors to experience.

The course offering changes regularly with the produce that comes into season, so there’s always something new to look forward to. So, if you’re a vegetarian or vegan (and the chefs can alter the dishes to make them completely vegan-friendly) and you’re looking for an elegant dinner option, I’d recommend it wholeheartedly. And if you’re an unrepentant carnivore? Give it a try. You’ll be pleasantly surprised.

For more information about Two Rooms, visit our Concierge listing.