Surviving as a Vegetarian in Japan – How to Find the Right Food, Right Restaurant in Tokyo and Learn New Skills

Vegetarianism, in Japan, is often a mystery to restaurant staff, and that is the source of much frustration to a growing number of foreigners, and Japanese, who don’t want to eat meat. Helen Marvell shares her thoughts, some tips and gives a little bit of inspiration.

The Survival of a Vegetarian in Japan

Arriving in Japan with 12 years of vegetarianism under my belt – and a brief flirtation with veganism – I was taken aback when I realised that the concept of a vegetarian lifestyle isn’t recognised (as we know it) here.

I spent my first few weeks here eating mainly yellow, beige and white foods (rice, fries, bread, cheese) which resulted in the flu and a craving for a good English home cooked meal. Whilst Japan is slowly becoming more accustomed and open to vegetarian options it still displays a certain ignorance towards and lack of knowledge of the concept: surprising when you think that vegetarian favourite, tofu, was first made popular here.

The Japanese diet is generally very healthy, but it also mainly centres around fish and meat.

In restaurants there have been times when I’ve asked the staff to leave out the meat or fish part of the dish (such as the chicken on a pizza…) but they have, politely, refused.

I’ve also discovered that many vegetables are coated in animal-derived sauces such as dashi, and noodles are often cooked in a fish or meat broth.

In the supermarket the language barrier makes reading ingredients on products can pose a problem to being a vegetarian in Japan, and there’s no Vegetarian Society symbol on products to guide you like in the UK.

Although it’s not the easiest or most practical lifestyle to stick to in Japan, I’ve learnt that it isn’t impossible!

My first advice for vegetarians living in or visiting Japan is simple: learn a little Japanese, such as the kanji for meat (肉) and fish (魚), and a few key lines such as “I’m a vegetarian. I don’t eat meat or fish”.

Be aware that sometimes seafood isn’t always classed as fish, and thus it might be expected to be something you will eat – words for individual items, such as “shrimp” (ebi), may be useful too.

Also, despite your best attempt at conveying the message, always be aware that there might be a surprise loitering in your dish amongst the vegetables. Surprises I’ve come across include bacon, fish flakes and small white baby fish.

For the first few months I was here I carried around a piece of paper that my Japanese friend had written on, in Japanese, explaining what, as a vegetarian, I could eat. This was useful to show people in restaurants or at supermarkets should my broken Japanese confuse them.

Making food at home is a simple solution, but unfortunately a lot of apartments have small kitchens and no oven. Plus, the apparatus and ingredients are different to what people are used to back in their home countries. A blender and a toaster oven were my first saving grace kitchen buys, as were as several utensils from the 100 yen store.

I’ve also recently gifted myself an oven, after a year of “should I, shouldn’t I?”. It’s great to finally be able to make my own bread and cakes and I would strongly recommend making the same choice if you are planning to stay in Japan long term.

Most convenience stores stock plain soba noodles and seaweed origiri at very reasonable prices, and at the supermarket I would recommend buying seasonal fruits and vegetables, which are usually the cheapest to buy. I have been guilty of buying a lot of produce from the local 100 yen convenience stores as in the bigger supermarkets not only are fruit and vegetables expensive but they come in large bundles; as somebody living alone I often find they go off before I have a chance to use them.

The bigger supermarkets tend to have foreign sections and there are a host of foreign food stores in the malls and shopping areas of Japan’s bigger cities where you can pick up Western ingredients to make more familiar vegetarian dishes, though obviously at a greater price.

Big cities often have Natural Food stores where you can sometimes pick up variations of soy ‘meat’, but again it can be expensive.

Frustrated with my lack of knowledge of traditional Japanese meals and being unable to take advantage of cheaper Japanese ingredients I recently went along to Haru Vegetarian Cooking Class in Kyoto.

In my session, we made vegetarian miso soup, egg omelette and agedashi tofu and were provided with a recipe sheet to take home. I have easily been able to replicate these dishes since.

If Kyoto is a little out of the way, the internet is a great source for finding out how to cook traditional Japanese food with a vegetarian twist. One of the most useful blogs I’ve found recently is cookinginjapan.com.

Not only are there some great vegetarian recipes on there, but there are also some Japanese translations of Western products, which makes it easier to locate ingredients in the supermarket.

Since moving to Japan, I’ve taken a keen interest in dining at new restaurants and discovering great places that cater to vegetarians, which is an adventure in itself. A lot of eating out experiences heavily weigh on trial and error.

Izakaya, sushi bars and yakitori places often have vegetarian options (although limited), as well as Indian and Italian restaurants which have familiar vegetarian dishes. The Tokyo area obviously has a wider range of vegetarian restaurants than the rest of Japan. One of the gems I’ve come across in Tokyo is It’s Vegetable! in Kinschicho.

The food here is Chinese style, a mix of flavourful sauces with bright vegetables and soy ‘meat’, from ‘soy chicken’ and ‘beef’, to ‘fish’.

The menu has many choices and sometimes offers a buffet option. It is small so perhaps book a table: the owner is friendly and can speak English.

A great place to find vegetarian restaurants in Tokyo is Happy Cow. [ed: also have a look at the Tokyo Veg Guide] When planning a dinner with friends, why not suggest a place you know that has vegetarian options and book ahead!

One of the questions I always ask myself is, “What did we do before Google and hair straighteners?” Surely nobody knew anything and everyone had really bad hair?

As briefly mentioned earlier, use the internet to explore vegetarian options in your area! You can always find other vegetarians in Japan, and can swap recipes and restaurant recommendations.

There are many vegan and vegetarian groups across Japan that hold annual festivals, including Tokyo Vegefood Festa, which takes place in October this year. Your local international group may also be able to introduce you to local vegetarians.

The internet is your connection to import services that can deliver all sorts of vegetarian foods and ingredients to your door. It’s often a good idea to order with friends to keep the delivery costs down.

Finally, good luck with your vegetarian journey in Japan! 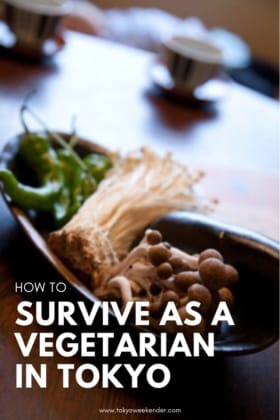 LEARN TO COOK JAPANESE VEGETARIAN FOOD LIKE A PRO AT THIS CLASS!
For an extra 5% off use our coupon code TOKYOWEEKENDER during check-out.