Piko Taro Pens His Way to a Guinness World Record

The singer/comic burst onto the scene towards the end of the summer with his annoying but infectiously catchy tune “Pen-Pineapple-Apple-Pen” (“PPAP”) and is now one of the country’s most recognizable faces.

The 45-second track has attracted fans from all over the world and received a ringing endorsement from Justin Bieber. At the time of writing the official video’s been watched on YouTube just under 90 million times, though the total online views of the song have already exceeded 500 million. There are also 70,000+ cover versions and collaborations, including the most recent one with Elmo and Cookie Monster from Sesame Street Japan.

On top of all that the song also entered the Guinness Book of Records as the shortest track to reach the top 100 of the US Billboard Chart, making Piko Taro the first Japanese artist to enter the American charts since Seiko Matsuda back in 1990. Not bad for a strange-looking man in a leopard-print outfit who started the year as a relative unknown.

“Back in January I was performing free live shows at parks,” he tells Weekender. “It’s something I’ve been doing for years. There would usually be an audience of around… zero, although occasionally one guy would turn up videoing me on his phone. 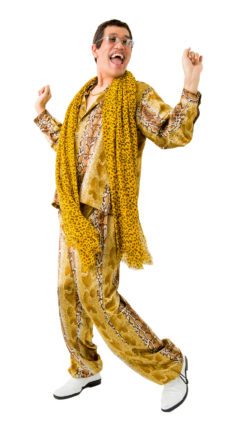 “It was always my dream to be a singer. As a child, I belted out Stevie Wonder tracks and that continued as I got older. I thought my chance wouldn’t come; then five years ago, I met my producer, who let me perform at a live house in Ebisu in front of 100 people. That became an annual event. I also did charity shows for Tohoku and some comedy gigs.”

The producer he’s talking about is Daimaou Kosaka, the stage name of Kazuhito Kosaka, who happens to be the same guy who plays Piko Taro, but is 10 years younger (yes, it’s quite complicated). His back story for Piko Taro includes a 78-year-old wife whom he fell for after a chance meeting at a hospital. There’s also a number of part-time jobs that he manages to do while maintaining his career as a singer.

“I go out in my illuminated yellow jacket and helmet to fix electrical cables,” he says. “I also sell rhinoceros beetles that I make by adding horns to drone beetles.”

Back in the real world, the Aomori-born Kosaka is a reasonably well-known entertainer who was part of a comic trio, “Bottomless Air-Line,” and the comedy/techno group called “New Bushidou Ravers.” He had minor roles in Mika Ninagawa’s movie “Helter Skelter” and “Crow’s Thumb” alongside Hiroshi Abe. In 2014 he released the iOS/Android game “JK Festa Vampire Fate.”

Fellow comedians would sometimes mock Kosaka’s struggles, but he’s the one laughing after Piko Taro decided to combine some fruit with a writing implement. “I remember the day well,” Piko Taro says. “I was at Kosaka’s house and had a pen in my hand when I saw an apple on the table. Oh apple-pen, yes [makes a stabbing motion]. Now what next? Pp-pet-bottle no – oh there was a pineapple here yesterday. Perfect, pineapple-pen [he starts dancing]. It was great – Kosaka knew immediately we were on to something.”

Given the song’s lyrics, you can’t expect a much more profound explanation. The video cost just ¥100,000 to make, was released on August 15, and instantly proved popular amongst Japanese students. It then turned into a global phenomenon when Justin Bieber tweeted that it was his favorite video on the Internet.

“When I first heard that I thought a beaver had tweeted something about it,” he says. “Honestly, that sounded more realistic. Obviously, I was delighted. The ‘Justimpact’ has been phenomenal. I sent him a thank you message, but I doubt he’ll read it given the thousands of people who write to him.”

Soon after the Canadian singer’s message, which received over 68,000 retweets, “PPAP” officially became the number one music video on YouTube and reached the top 100 of various charts around the world. Stephen Colbert opened “The Late Show” with a skit of “PPAP” and more recently Ivanka Trump shared a video of her daughter performing it via her Instagram account.

“It started with junior high school girls and then just snowballed,” Piko Taro says. “At first, I didn’t have clue why they’d want to imitate me, but I’ve loved seeing all the different versions. Most are better than mine.”

With the rising popularity comes the unsurprising suggestion that “PPAP” is the next “Gangnam Style.” While Piko Taro can understand why – they’re both earworms penned by Asian artists – he believes the two tracks have come from very different ideas. “‘Gangnam Style’ is a kind of parody of LMFAO’s ‘Party Rock Anthem’ that makes people dance, whereas ‘PPAP’ is part of Kosaka’s comedy sketch,” he says. “The goal was to make lyrics that were clear so audiences would laugh and try to mimic the words. We also used a technique popular in musicals where you stop the melody during the track. The two songs aren’t similar at all, but if people want to compare them then I’m honored. After all, ‘Gangnam Style’ was a sensation that’s been watched more than two billion times.”

The monster tune was of course written by PSY, whose follow-up song “Gentleman” garnered over a billion views. It proved he was no one-hit wonder, as many critics believe Piko Taro will eventually be labeled. He doesn’t seem too worried.

“I could have a second hit – maybe even a third – or this could be my only one,” he says. “What I do know is I’m not a no-hit wonder and that delights me. It’s like a batter who hits a home run. You can’t be sure when the next one’s coming so for the time being you’ve got to enjoy the moment. That’s what I’m doing. Right now, people are talking about my song and that’s an amazing feeling.”

But the comments haven’t all been positive. Most people see “PPAP” as a bit of harmless fun, but others have voiced their disapproval of Piko Taro’s success while “more talented and serious artists” struggle to gain recognition. Initially surprised by the unfavorable observations, the comedian is now much more relaxed about it all.

“Early on I thought it was scary, but as a performer what’s even more frightening than criticism is getting no reaction at all,” he tells us. “Honestly, I don’t understand what most people have written anyway because I only speak Japanese, but I get the general vibe and try to read through everything so I can learn from it … One minute you check and people are saying nice things, the next you see something negative. That’s fine. It’s a microcosm of life! We all have ups and downs; you just hope to experience more of the former.”

Piko Taro’s career is certainly on the way up now, and his company Avex is looking to cash in with a 20-track album due for release soon. He hopes to finish 2016 by singing on the popular NHK show “Kohaku Uta Gassen.” The ultimate dream, however, is to perform at Madison Square Garden, “possibly alongside Justin Bieber,” he says. After the year Piko Taro’s had, maybe that isn’t as far-fetched as it sounds.