Stepping onto the dock at the Iki ferry terminal, we immediately felt like we had shifted down several gears from the fast pace of Tokyo—even Fukuoka, where the hour-long ferry ride started from, seemed like another world away. We took a deep breath of the sea air and started out on our tour.

When the weather is good, a bicycle is an ideal way to get around the island: bikes are available for rent at Iki’s tourism office (a short walk from the ferry terminal), where you can also find out about seasonal events, festivals, and other activities.

As we made our way around the island, passing over gentle hills and through curving, tree-lined roads, we imagined that the historical inhabitants of Iki would have been as taken with the scenery—clear blue-green water, pristine beaches, and expansive views from the hills and mountains—as we were. Over thousands of years, several different civilizations have made their home on the island: archeological traces remain of Jomon, Yayoi, and Kofun Period people, who left behind the signature burial mounds that dot the island’s landscape. Even some sea pirates—the wakou, who were of Japanese, Korean, and Chinese ancestry—have touched Iki’s history. 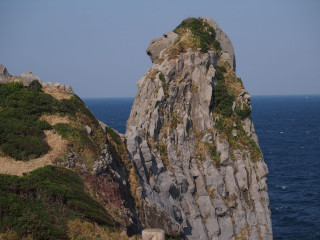 One of Iki’s most well-known sights: Saruiwa, or Monkey Rock (Photo: Alec Jordan)

Over the hundreds and thousands of years that Iki has been inhabited, its people have paid their respect to the forces of nature in various ways, and the island’s 200 shrines and temples are one form of demonstrating this respect. Built in places of natural power or beauty (a grove of trees, for example, or a small mountain, or a waterfall), the sheer number of shrines in such a small space stands as a testament to how much the people of the island appreciate the nature that surrounds them. You could say that the people also have a strong superstitious streak, so it was no surprise that we heard more than one local tell us a ghost story during our trip. In fact, one of Iki’s most prominent symbols has its origin in a supernatural tale.

Yuriwakadaijin and his demon adversary (Image: City of Iki)

In the dawns of time, the legendary warrior Yuriwakadaijin had been tasked with clearing out of the demons that inhabited the island, and he had gotten rid of all of them, but for one, who was the fiercest of them all. The warrior and the demon were caught in a fierce battle that lasted for hours. Finally Yuriwakadaijin was able to lop off the demon’s head, but such was its tenacity that it managed to land its jaws atop the warrior’s helmet, squeezing away until the fighter feared it would break. His helmet did hold firm, and to this day you can find flags and banners emblazoned with this pair of combatants, with the warrior looking up into the eyes of his defeated foe. Of course, there’s a touristic touch to these items, but it is hard not to see the image as something of a symbol of wildness and civilization, looking each other in the face, that is part of Iki’s attraction.

A less fanciful way of looking at the island’s past is Iki’s Natural History Museum. We were surprised by this space’s polish and sophistication; it would definitely fit in perfectly in one of Japan’s larger cities. In fact, the museum is a field trip destination for schoolchildren who come from as far away as Hiroshima to see the exhibits. Designed by the celebrated architect Kisho Kurokawa shortly before he died, the museum is a unique structure, with a grass-covered roof that imitates the contours of the landscape that surrounds it. The museum’s pride and joy is a smaller affair, however: an elaborate diorama of a Yayoi Period community that would have lived on the island. Normally, a historical diorama is nothing to write home about, but the detail, humor, and charm of the figures that inhabit the exhibit bring the historical period to life—literally, in fact: we heard from the museum staff that many of the faces of the characters in the diorama were modeled on the faces of people who live on Iki today. There are also some Yayoi Period clothes on hand, if you’d like to see how you’d look in extremely retro fashion. 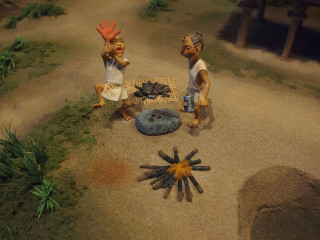 Of course, one can’t travel on history and scenery alone, and after we had a chance explore a bit, we found ourselves with quite an appetite. Iki is surrounded by rich fishing waters that yield some of the largest tuna in Japan, flavorful sea urchin, and squid; fishing for the latter also provides one of Iki and Tsushima’s most memorable night views. Squid are most active by night, and to attract them to their boats, fishermen use an array of dazzlingly bright lights, known as isaribi, to lure the squid to their boats. There are dozens of boats out at any given time, and gazing out at a clear sky decorated by bright points at the horizon line is a perfect way to finish a day of exploring. We were surprised to find out that, in addition to a variety of seafood the island is famous for its own style of wagyu, and one of the best places to get a taste of this well-marbled beef is right by the ferry terminal, at the restaurant Umeshima where you can try Iki wagyu as a Western-style steak or as yakiniku.

How to get there:

Finally, whether you’re traveling by bicycle or car, we’d recommend parking it and taking a taxi to visit one of Iki’s shochu distilleries. The island is best known for mugi (barley) shochu, and on our visit to the Iki no kura distillery, we sampled varieties of the spirit, ranging from light flavors to strong-bodied shochu that was reminiscent of a fine whiskey.

For a relaxing vacation destination that lets you take things at your own pace, Iki is well worth the trip. We’re already looking forward to our next visit.

Ryokan Hirayama is an ideal place to stay on your visit to Iki. Located in the center of the island, it offers Japanese- style rooms that are both elegant and charming. The tastefully decorated chambers are a perfect place to unwind after a day of exploring, and friendly atmosphere will put you completely at ease. 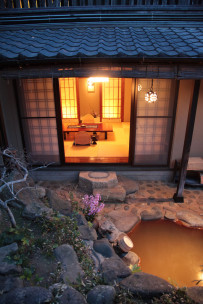 A view into one of Ryokan Hirayama’s rooms

As you soak in the ryokan’s mineral-rich onsen, covered with a canopy made from broad-leafed tropical plants, you can practically feel the tension float out of your body. In fact, the only thing that might make you want to hurry out of the bath is the thought of dinner. The kitchen’s rotating menu highlights the freshest seasonal ingredients that can be found on Iki, from artfully prepared seafood to produce drawn from local fields—and even the ryokan’s garden. Ryokan Hirayama also boasts an impressive selection of sake and of course, Iki’s local shochu. And the next morning, a hearty, seemingly endless breakfast will give you plenty of fuel for the day’s adventures.

Service at Hirayama is friendly, attentive, and welcoming, and the entire operation is masterfully run by Ryokan Hirayama’s grand dame, Hiromi Hirayama. The vivacious Hirayama-san plans the menu, goes to the fish market early in the morning to buy the kitchen’s ingredients, and enlivens any room she enters with stories, jokes, and good humor. It can be said without a doubt that she is one of Iki’s celebrities, and the ryokan has been featured in some of Japan’s major publications and TV programs. There are eight rooms available at this intimate ryokan, ranging in price from ¥13,000 to ¥32,000; dinner and breakfast are included. A pickup service from the Iki ferry terminal can be arranged when you make your reservation.