Nicolas Cloiseau was probably destined for a culinary career, and he didn’t have to go far to begin learning. Most of his youth was spent roaming around his restauranteur uncle’s kitchen in Brittany, and by the time he graduated from high school, he knew more than his fair share about fine cuisine. After a pâtissier course that left him hungry to learn more about chocolate, he landed a job at the prestigious La Maison du Chocolat in Paris, founded in 1977 by Robert Linxe. The founder was so impressed with his apprentice’s sense of artistry that he created a position for him, which allowed him to craft outstanding pieces and create his own collections. 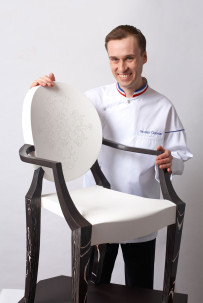 Cloiseau posing with one of his competition pieces: a chair made entirely out of chocolate.

It was also during that time that Cloiseau entered various contests and won the distinguished “Meilleur Ouvrier de France” award back in 2007, which recognizes special abilities amongst professional craftsmen. It goes without saying that the award is not an easy one to obtain, and recipients must demonstrate a high level of technical proficiency to be worthy of the recognition, and create pieces that demonstrate both skill and ingenuity. “One of the most challenging creations I’ve ever had to do was to fabricate a snake necklace to attach to a yellow diamond for jeweler Boucheron’s 150th anniversary,” Cloiseau notes, referring to the masterpiece that paired a 20.08 carat diamond with real chocolate covering a gold skeleton.

This sense of innovation, creativity, and playfulness continue to show through in Cloiseau’s confections today. In a similar fashion to designer clothing brands, La Maison du Chocolat creates limited chocolate collections for each season, complete with original ideas and concepts standing behind the story. “Each collection and product is made with artisanal spirit, and demonstrates the philosophy of the maison,” says Cloiseau.

This summer’s featured collection is entitled “Esprit Cocktail,” and it is the product of a collaboration between two Meilleur Ouvriers de France—Cloiseau and Maxime Hoert, head barman of luxury Parisian hotel lounge The Bar du Bristol. The delicate ganache in this collection combines with fruits and tea infusions, bearing names such as “Bellini” (dark chocolate ganache, Champagne and peach liqueur) and “So Bristol” (Earl Grey tea, citrus and flower infusions in dark chocolate). Remarkably, some of the exquisite creations in this collection contain no alcohol at all.

And while you may not be able to make the trip to The Bar du Bristol in Paris yourself, Cloiseau hopes that the flavors of La Maison du Chocolat’s latest collection not only “make you feel as if you were enjoying these cocktails at The Bar du Bristol in Paris,” as he explains, but also take you a short excursion through a variety of flavors: “When they bite into it, we want people to first taste the chocolate, then the added flavor, and the chocolate again to end on that note. This is the signature of La Maison du Chocolat.” Cloiseau explains that the taste and quality of the chocolate depends on its aroma, and he works closely with a sourcing expert who finds the exact chocolate plantations to match his collections. “Cocoa beans are a bit like wine, with particular undertones such as fruit.”

Cloiseau has visited Japan a few times already, and he quickly caught a grasp of the Japanese market. “Japanese are more subtle, and more sensitive. Whereas a strong chocolate will please Parisians, more often than not it will be too strong for Japanese,” says Cloiseau. Despite the different palates to please, he does not adapt his recipes for this side of the world, choosing to remain authentic to his culinary vision.

However, the chef has created some exclusive editions for the Japanese market, integrating traditional flavors such as yuzu and sakura. He is currently working with sake, which can be a challenging flavor pairing for chocolate. But judging by Cloiseau’s past creations, we have no doubt that it would be a delicious success. 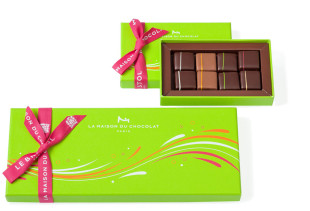