Perhaps the best way to kick off Japan’s Golden Week this time around was beachside in Oiso, Kanagawa, for the much anticipated Audio | The Haçienda Oiso Music Festival. Oiso Long Beach, an enormous swimming pool, water slides, palm trees and gorgeous summer-like weather provided the backdrop for the two-day festival thrown by legends from the musically pioneering Manchester venue, The Haçienda. In honour of its 30th anniversary this year, Haçienda brought the Manchester sounds all the way to Japan, with the celebration headlined by ex-Joy Division and New Order bassist Peter Hook, along with an array of DJs on different stages, both indoors and poolside.

Peter Hook & The Light performed an inspiring Joy Division set, closing with the mesmerising “Love Will Tear Us Apart”, which had the crowd enthralled for a memorable finale to the festival. Other highlights included The Charlatans’ performance of their Tellin’ Stories album on Saturday night and vocalist Tim Burgess sharing the stage with Peter Hook for an amazing rendition of Joy Division’s Ceremony on Sunday. Japanese new wave band Lillies & Remains and indie rock Manchester group The Whip both took over the main Fac 51 Live Arena for some remarkable sets. A great DJ lineup set the mood for the weekend: highlights included Carl Craig, a Detroit-based techno music producer who closed the daytime beachside stage with a frantic DJ set, as well as Nina Kraviz, Radio Slave and Tokyo-based Goth-Trad. Other noteworthy acts included Tokyo transplants HMS Control, who playfully energized the dance floor with their eclectic mix of Madchester and acid-house sounds, and the excellent Japanese producer Sugiurumn, who was accompanied by none other than infamous party animal Bez, from Happy Mondays (and Celebrity Big Brother), who danced along onstage – a major crowd pleaser. 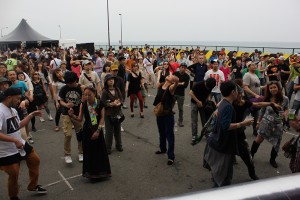 The after-party was held at Sound Museum Vision in Shibuya for ambitious festival goers who were not too sunburnt or tired after a near two-hour train ride (or a minibus ride with Bez and the whole Haçienda crew, for a lucky few.)

The poolside stage, the sandy beaches and sea view, the colourful cocktails, the skateboarding ramp, beach chairs and clear blue skies gave a summertime vibe to the festivities and made for an unforgettable soundtrack to kick start yet another scorching festival season in and around Tokyo.