As you head towards the end of the year in Tokyo, the first thing you need to do is get your bonenkai experience sorted. After that’s done, perhaps you want to learn a little more about the beer you’ll be sipping on as you celebrate the festive season. A visit to Suntory’s brewery is educational up front, with a delicious finish.

Japan may be best known for sake, but if you go to bars, pubs, and izakayas, the drink that you’ll most commonly find being poured is beer. Japan consumed more than 2.72 million kiloliters – that’s 718.5 million gallons – of the beverage in 2015, and is showing no signs of slowing down.

One of the giants of Japanese beer is Suntory, and their flagship product is The Premium Malt’s, an easy drinking lager that goes great with Japanese food, whether it’s yakitori skewers from a yatai during the summer or a hearty yakiniku feast in the middle of winter.

Suntory has four breweries in Japan: one in Tokyo’s Musashino area, one in Kyoto, one in Gunma, and one in Kumamoto, and tours are available at three of the breweries. When we heard about the opportunity to visit their Musashino brewery recently, we jumped at the chance.

A short walk from Fuchu Hommachi Station, the brewery is a massive operation, producing hundreds of thousands of liters of beer every day. Walking into the facilities, we were greeted by our tour guide, who led us to a small auditorium where an instructional video played and explained some of the things that make The Premium Malt’s the unique beer that it is – and as the tour moved into the manufacturing facilities, we got to see these for ourselves. As our tour guide explained, only three ingredients go into The Premium Malt’s: water, barley, and hops. The first, and most plentiful ingredient in beer is water. In fact, beer is 90 percent water – so if anyone tries to tell you that beer isn’t a healthy drink, you can always counter with that! In order to ensure a plentiful supply of 100 percent natural water, each of Suntory’s four breweries is located close to a fresh water source. In the case of the brewery in Musashino, the water source is the Tama River, and water for the beer is drawn daily from an enormous well at the brewery. Every day, Suntory’s brewers taste the water to make sure it will bring out the best of the other two ingredients.

What comes next is barley. Suntory uses the finest two-row barley to make its malt, and adds a rarely found diamond malt (which comes from Czech Republic and surrounding countries) to its barley mix, making for an even deeper flavor. We were given a chance to taste the barley, which reminded us a bit of oatmeal that hadn’t yet been cooked. Finally, tour participants get a chance to smell hop pellets, which have a sharp, bitter aroma that balances out the natural sweetness of the barley malt.

After seeing the raw material that goes into making the beer, we were brought into a large section of the brewery where the first part of the magic that is beer brewing happens, and where you get to learn just a bit of the science behind a tall frosty one.

The malt is made from barley that is allowed to germinate, or sprout, which kicks off a biochemical process that gets it ready to brew beer. It develops the enzymes that will help turn the barley’s starch into sugar, and other enzymes that transform proteins in the grain into substances that the yeast, which will be used for fermentation, can “digest.”

In large tuns, or vats, the malt is mixed with water and heated in a process known as mashing. At this stage, the starches in the malt are broken down into sugars by enzymes that are present in the malt. One of the techniques that Suntory uses to add a special touch to their beer is a process known as double decoction, which means that part of the mash is taken out of the tun and boiled, or decocted, two times in order to draw out the unique flavors of the malt. At this point, the sweet mixture of heated malt and water is known as wort, and the smell of it heating away in a large section of the brewery is much like the smell of oatmeal cooking in the morning – except on a much larger scale. You can also peer into the various tuns, thanks to windows mounted on top of them, which let you see exactly what is going on inside.

The next stage in the production of the wort is crucial to the flavor of good beer. In order to balance out the sweetness of the wort and add complexity to the flavor of the brew, hops are added to the wort twice: once when it begins to boil, and again just at the time when the boiling is about to stop. Suntory uses aroma hops for the first hopping stage, and these hops impart a bitter flavor that balances out the sweetness of the malt. Meanwhile, in the second hopping, fine aroma hops are used, which give the beer an elegant, refined aroma.

The next step is fermentation, which takes place at a much lower temperature than wort production. Yeast is added to the hopped wort, and during fermentation, the yeast turns the sugars in the wort into alcohol and carbon dioxide. After about seven days, the fermentation transforms the mixture into “young beer,” which is then matured as its flavor gets milder. Once it is matured, it is filtered, removing all of the materials that were used from the earlier stages of the beer-making process. What is left behind is the clear, golden color that is the mark of a fine lager beer.

Finally, the beer is packaged in cans, bottles, kegs, and other containers – guests on the tour can watch cans of The Premium Malt’s moving along conveyor belts, and boxed into cases.

After seeing so much of the work that goes into making the beer, we were more than ready to taste the final product. Fortunately, the final – and just maybe our favorite – part of the brewery tour is a visit to Suntory’s tasting rooms, where guests can sample three different varieties of The Premium Malt’s: Premium Lager, Kaoru Ale, and Master’s Dream, a Pilsener type beer. Each is served, with just the right amount of creamy head, in a special glass meant to bring out the flavor of each brew. It’s a tasty way to finish off a learning experience. 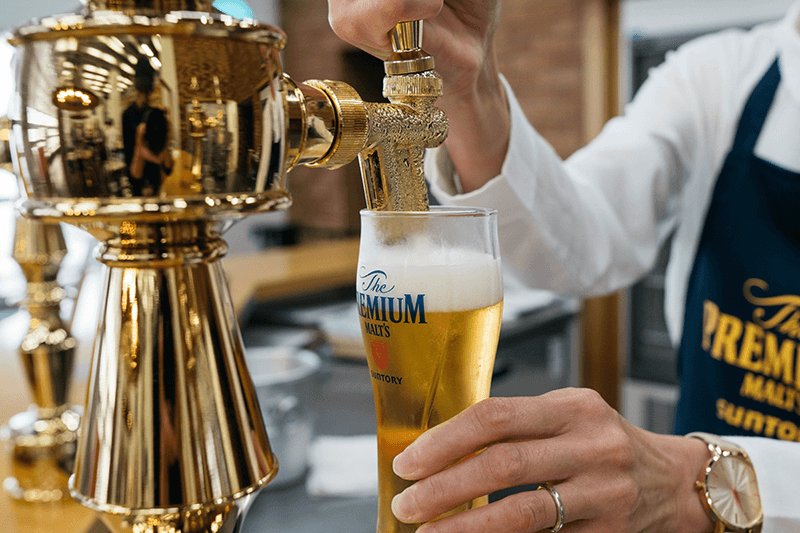 To schedule a tour at Suntory’s brewery in Musashino, call 042-360-9591 or visit www.suntory.co.jp/factory/musashino/index.html