New year, new Tokyo – from finally finished skyscrapers to reopening beloved spots after renovations. Tokyo maintains its reputation as the metropolis where new skyscrapers rise to alter the cityscape, cutting-edge technology rules and pop culture excitement is at an all-time high. We selected the biggest new developments in Tokyo in 2023. Potterheads can walk where dreams are made in this behind-the-scenes tour of the Harry Potter and Fantastic Beasts film series. The original Warner Bros. Studio Tour — The Making of Harry Potter opened in London in 2021, while the one coming to Tokyo in 2023 will be the second worldwide. The vast entertainment facility (the size of two Tokyo Domes) is on the site of the former Toshimaen amusement park in Nerima Ward. It will feature the iconic Hogwarts Great Hall, Diagon Alley and even a chance to board the Hogwarts Express at Platform 9¾. You can take a moving portrait of yourself and drink Butterbeer in the café for a perfect day immersing yourself in this fantasy world.

Reservations are required in advance.

Packing up its bones from London, this official Universal Studios exhibition of all things Jurassic will soon land in Tokyo sometime in 2023. The attraction will transport you to the fictional locations of the films, including the Hammond Creation Lab where you can see dinosaur eggs in incubators. The realistic life-size animatronic dinosaurs will roar and move, blurring the lines between reality and fantasy.

More details will be announced later this year. Animate’s flagship store in Ikebukuro will be the biggest anime store in the whole world and one of the certified 88 Anime Pilgrimage spots for 2023. The new flagship store will encompass the old Animate store that’s been there for 40 years and expand to contain a café, an exhibition space, a theater in the basement and an event space on the ninth floor for various performances. Of course, it will have multiple floors of anime merchandise, media, manga volumes and even manga drawing art supplies. The Animate Ikebukuro official website has already listed events such as autograph signing sessions and special screenings in March. 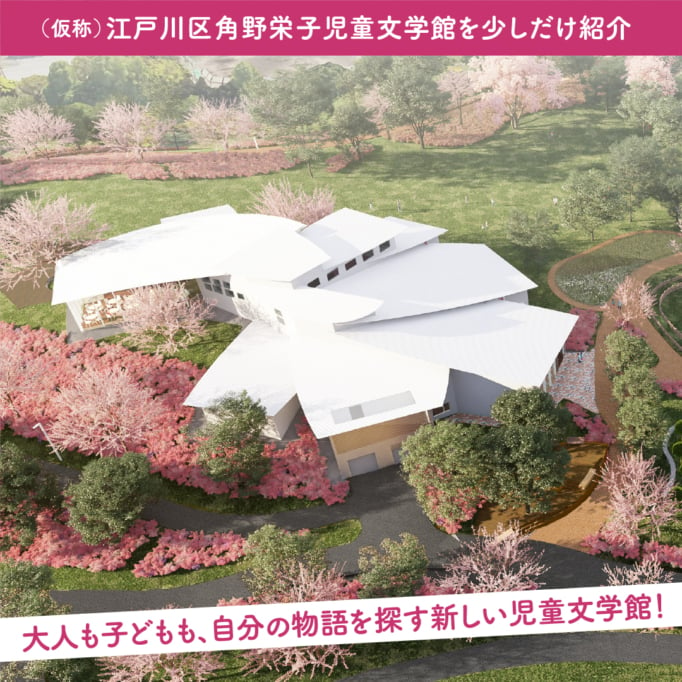 Eiko Kadono is an illustrious author of children’s literature. She’s most well-known for writing the Kiki’s Delivery Service series of novels that were adapted into an animated film by Studio Ghibli. She has written many other works and in 2018 she won the prestigious International Hans Christian Andersen Award for Writers. The author was born in Tokyo’s Edogawa Ward, the location of the new museum dedicated to her.

The building designed by Kengo Kuma and Associates utilizes a lot of pink and white to create the fantastical atmosphere prevalent in Kadono’s books. Visitors can expect lots of cats and even a pink replica of Koriko, the city from Kiki’s Delivery Service. The museum is designed to invoke a sense of adventure and discovery as you move through its halls. Surrounded by nature in Nagisa Park, it will also have a playground and a pony center next to it. Kadono hopes children will have fun all day and go home inspired to create their own stories.

A super high-rise complex facility with 48 floors above ground and five floors underground, Tokyo Kabukicho Tower houses not only hundreds of stores but even two hotels, a cinema, a theater and a live music hall.

Bellustar Tokyo (floors 39 to 47) and Hotel Groove Shinjuku (floors 18 to 38) boast excellent city views. You can watch a movie, play or concert and then grab a drink or a meal in the same building. The whole second floor will be a yokocho-style area with numerous small eateries. The third floor will be dedicated to pop culture with Bandai Namco’s giant arcades and neon lights spread out, while Sony Music Entertainment will take over the fourth floor to create a hi-tech experience with escape rooms and dungeons, among other things. The fifth floor will be dedicated to health and wellness with facilities such as a terrace swimming pool and a gym open 24 hours. For the ultimate convenience, buses to and from Haneda and Narita airports will stop directly outside the basement of the tower.

The third Midtown shopping and office complex, Tokyo Midtown Yaesu (located at the Yaesu exit of Tokyo Station) is set to join the already popular Tokyo Midtown Roppongi and Tokyo Midtown Hibiya. It will enclose a variety of shops and restaurants showcasing the best in Japanese craftsmanship, luxury and gourmet. On the second floor, there is a public green space open to all. The bus terminal inside it and some shops have already opened. There’s also the Chuo Ward Elementary School (floors one to four), which was on this site before the redevelopment. The grand opening, however, is scheduled for March 2023.

The luxury Bulgari Hotel Tokyo inside the complex (floors 40 to 45) will open a month later, in April 2023. The building will use sustainable green energy and will be as contactless as possible. Facial recognition technology will enable smart doors and smart elevators. There will also be delivery robots connected to 5G technology.

Three decades in the works, this cutting-edge, eco-conscious city within a city developed by Mori Building will be complete in 2023. It is adjacent to Ark Hills and in between Roppongi Hills and Toranomon Hills, effectively linking all of these centers to create one big cultural and economic hub. The Azabudai Hills complex is focused on greenery, public space and a healthy lifestyle. What’s more, 100 percent of the electricity supplied to the neighborhood will be from renewable sources. This complex will house shops and restaurants, offices, schools and Tokyo’s tallest residential tower. There’s also the new teamLab Borderless digital art museum and luxury hotel Janu Tokyo, Aman’s sister brand. Many major architects in Japan have expressed dreams to build high-rise buildings and skyscrapers out of wood, partly tapping into Japanese carpentry traditions and partly inspired by the movement for more sustainable architecture. While major architecture companies have envisioned a wooden skyscraper, one company is starting small with an achievable project. The Ginza Takagi Building (provisional name), a flagship building of the Takagi Group, will have 12 floors and a basement. The plan is to house retail stores on the first and second floors, offices from the third to the eighth floor and restaurants from the ninth to the 12th floor. The restaurant floors will be completely made of wood. The rest of the building, meanwhile, will have a wooden façade. In 2023, the popular shopping and entertainment complex Sunshine City will celebrate its 45th anniversary. Among the many events planned to commemorate the anniversary is the reopening of the renovated Sky Circus Sunshine 60 observatory. This observatory is popular as it offers great photo spots and a view of Mount Fuji on a clear day. In addition to the great panoramic views of Tokyo from above, there are VR and 4K experiences. While in Ikebukuro Sunshine City, you can also check out the popular aquarium. The world’s first digital art museum, teamLab has been dazzling with interactive exhibits of light and sound. In Tokyo, where it all began, teamLab closed its Borderless museum in August 2022 but with the promise of reopening in 2023. Dates are yet to be announced, but the new Borderless is set to open later in the year in the newly developed Azabudai Hills area. It promises to be even more wonderful, inspiring and borderless. In the meantime, visitors can still enjoy teamLab Planets in Toyosu (still open at the time of writing).