According to the Japan Vending Machines Manufacturers’ Association, Japan has the highest number of vending machines per capita. While America has the most in total, what’s impressive in Japan is the density and distribution of vending machines. There are currently around 4 million units in this country. They also tend to be more inventive, creative, unique and downright weird at times. So, we’ve scoured Tokyo’s parking lots, backside entrances, subway station passages and more to bring you some of the best finds. Here are the most unique vending machines in Tokyo. 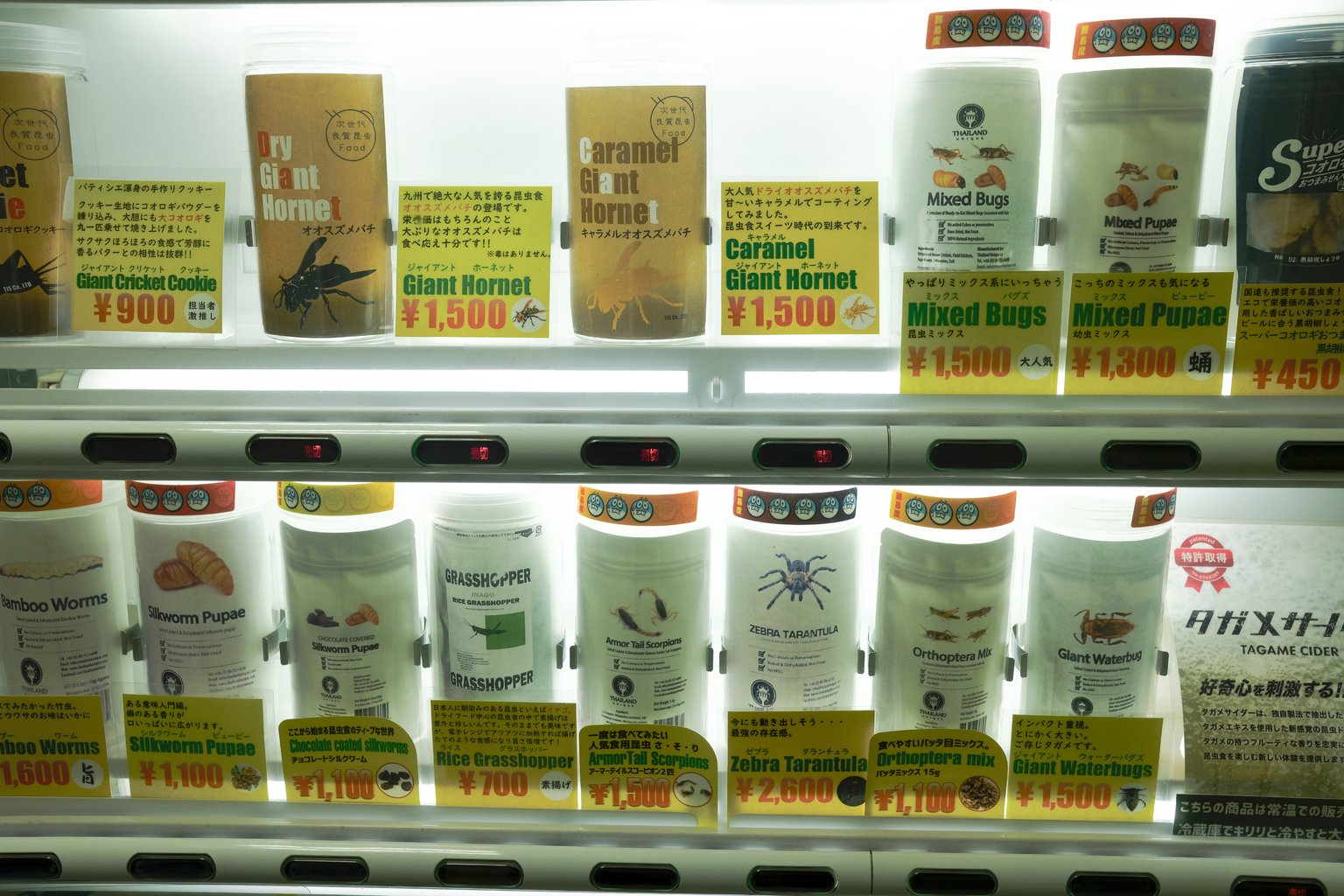 Photo by image_vulture via Shutterstock.com

This sounds like bugs being unfortunately trapped behind a glass. However, this is a case of packaged insect snacks in dedicated vending machines. The insects’ category is used liberally and covers other species too, such as tarantulas.

The insect vending machine picture above is found in Shibuya but it’s not the only one in Tokyo. The same seller has a vending machine near Ameya Yokocho in Ueno too, as well as in other cities in Japan. In Tokyo, there’s Kome to Circus, a bar that specializes in insect food and drinks. It also has a vending machine with insect snacks in front of its store in Takadanobaba.

On top of all that, there’s a vending machine of oddities in Inokashira Park in Kichijoji that sells canned bee larvae and canned crickets, alongside pan in a can, hellishly spicy snacks and other random products. It’s situated near the main bridge that goes across the Inokashira Pond. Photo by Lucian Milasan via Shutterstock.com

Found in multiple locations nationwide, cigarette vending machines in Japan differ from other machines in the purchase method. Since 2008 a special card called “Taspo” has been required to confirm you’re not a minor. These machines are often found in old hotels, pachinko parlors and more retro areas, as opposed to trendy new locations.

The cake in a can concept is a fun treat in itself but putting it in a vending machine is the cherry on top. Cakes in a can used to be sold in convenience stores as novelty items, but are now harder to find. Two locations we’ve spotted vending machines for these cakes in a can are near Oshiage Station under Tokyo Skytree and in Marui in Yurakucho. They are by different manufacturers and offer different flavors.

The layered cakes are soft, creamy and easily eaten with the spoon they come with. At a price point of around ¥800-1,000 they are a bit pricier but not far from what a cake will normally cost you in a nice café in Tokyo. Blue Bottle Coffee is a major name in the world of quality coffee, and they have dozens of stores around Tokyo. In 2020 Blue Bottle began opening what it calls “quick stands” which are vending machines offering the company’s products. You can buy bags of Blue Bottle coffee beans, canned Blue Bottle coffee, instant coffee sticks and original mugs and cups.

There are several Blue Bottle vending machines around Tokyo, in major hubs such as Shibuya and Roppongi. See the full list on the Blue Bottle website. Fresh and healthy food can be hard to find, especially when you’re in a hurry. Enter the humble banana. Dole, an internationally known banana importer, has set up its own banana-only vending machine in Shibuya, near exit 3 of the Hanzomon Line. Individual bananas are refrigerated at 13 degrees Celsius and sold for ¥150. It’s slightly more expensive than buying a bunch at a supermarket, but that’s the price of convenience. That’s also roughly the price of most drinks and snacks in vending machines, so this healthy snack will not cost you more. “Feed Me Orange” is a British company that first placed an orange vending machine in Shibuya Marui in 2021 (now relocated to the Shibuya Modi building). In 2022 we also spotted two orange-colored vending machines in Kichijoji — one outside Kichijoji Tokyu and one outside the supermarket Seiyu.

The vending machines are filled with fresh oranges that are squeezed upon order to produce orange juice that contains three to four oranges in 40 seconds. A cup of juice costs ¥500. Follow “Feed Me Orange” on Instagram to learn about upcoming vending machine placements. 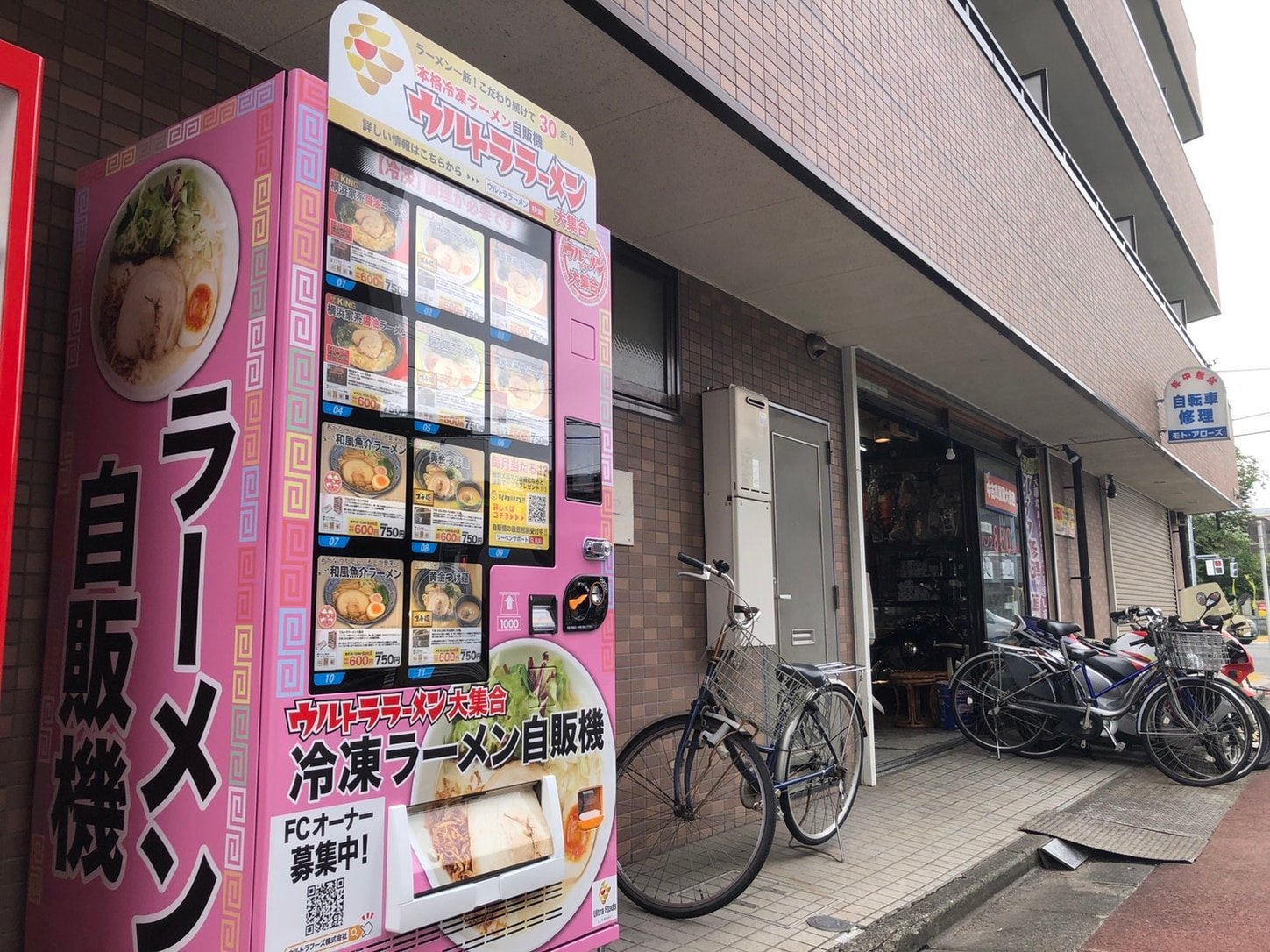 Ramen is a fast and convenient food option even when served hot and often you pre-purchase a ramen ticket from a vending machine in front of the ramen joint. Taking that even further, there are frozen ramen vending machines around Tokyo and other cities in Japan. We’ve spotted the one pictured in Ota Ward and another one in Shinagawa Ward.

Niku no Mansei in Akihabara is a famous restaurant for meat lovers that has been around since 1949. The multi-story building has specialized floors for different meat dishes from wagyu beef to shabu-shabu. Its popularity means it’s always busy, but it offers a quick meaty bite on the go from its vending machine outside (under the train tracks). There are several sandwiches on offer such as pork cutlet and hamburger steak. They are pre-cut and packed in a box for convenience. All sandwiches are also affordable at prices below ¥1,000. Photo by Sergey Bogomyako via Shutterstock.com

Similar in looks to bottled iced tea, these fish broth bottles in vending machines around Tokyo have confused many, particularly if you can’t read Japanese. A small fish is immersed in each bottle, but that’s easy to miss when in a thirsty panic. The bottled broth is not meant for drinking, but for cooking. The vending machines are just a convenient way to buy this product from Nitandashouyu, a much-loved udon shop hailing from Hiroshima. It has about two dozen vending machines in Tokyo and more all across Japan. When it starts raining suddenly and you don’t have an umbrella, finding one as soon as possible is of the essence. Convenience stores always stock umbrellas, but there have also been umbrella vending machines popping up. Mostly found in train stations and in front of convenience stores. Spotted in the restrooms of Shibuya Parco, these female hygiene product vending machines are especially handy in emergencies. It makes us wonder why they aren’t a fixture in every restroom. Of course, they’re not only in Parco and can be found elsewhere but they’re not ubiquitous. As expected with vending machines, the price is higher than what you’ll pay at a supermarket but the convenience markup is worth it. 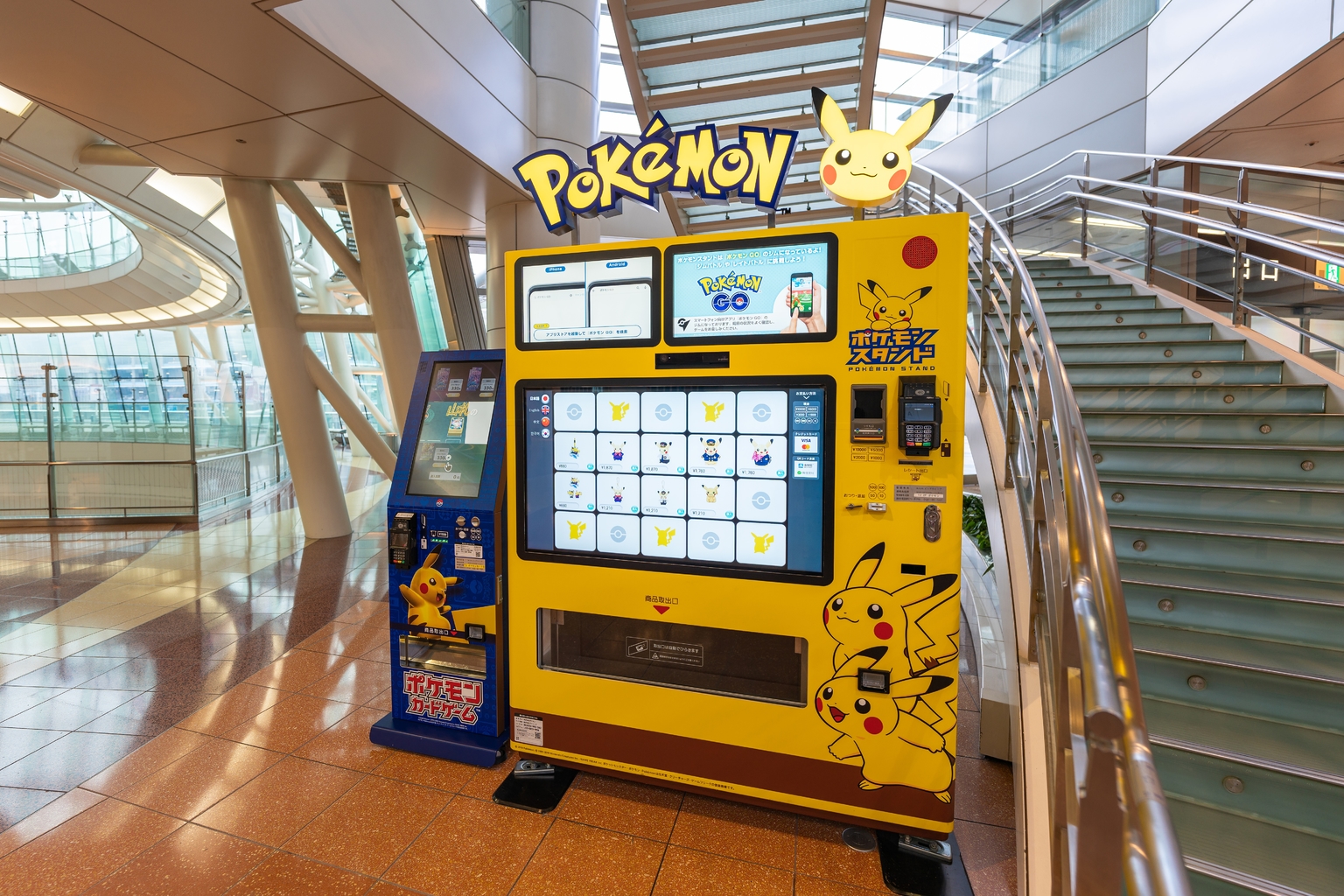 Photo by yu_photo via Shutterstock.com

These vending machines sell Pokémon merchandise via a digital touchscreen with an animated Pikachu popping in and out of the screen and interacting with you. The airport Pokémon vending machines have Pikachu dressed as a flight attendant. Photo by simpletun via Shutterstock.com

Spotted at Haneda Airport in Tokyo, this vending machine is one of necessity since the Covid-19 pandemic started in 2020. There are face masks and quick PCR tests for purchase, as one probably needs these products most before or after a flight.