Tokyo loves to play hide and seek with itself. Some of the most curious things in the metropolis are hidden where you least expect them: rooftop Torii gates, temples between skyscrapers, bars under the train tracks, artworks in the subway and poems on your green tea bottle. Poetry in Tokyo is hidden in plain sight, especially if you can’t read Japanese. But if you know where to look, there’s a wealth of words to find. Here are some of the poems I have discovered.

Mount Takao, the mountain closest to central Tokyo, is full of poems hidden in plain sight. Once you reach the Joshinmon Gate and start climbing the 108 steps to the temple area, there are dozens upon dozens of poems in stone to find. The approach to the temple is called the Literature Monument Road.

At the Yakuoin Temple, there is a rock with a poem by Hakushu Kitahara, the famous tanka poet from the late 19th and early 20th centuries who loved Mount Takao.

Also inside this temple, there is a monument with the verses of famous enka songwriter and lyricist Saburo Kitajima. He helped create the monument and left a handprint too. The lettering in the stone is made from the handwritten lyrics by Kitajima.

At the top of the mountain, there is a visitor center and a teahouse. On the right side of the teahouse at the back, one step down, about one meter below where the table is, you can find a monument. This monument contains a poem and is dedicated to Godo Nakanishi, a poet and ornithologist.

These are just a few of the many poetry monuments. All the poems are connected to their surroundings, whether referring to Takao and Hachioji, or contemplating Buddhism and the nature in the area. Inspiration can strike anytime and anywhere. Certain poems even include the date and place, a metatext that adds layers of significance. Whether it’s a famous landmark or an unassuming alley, there are many places that have inspired works of literature. In Tokyo, there’s an app that can help you discover some of those very spots full of poetic charge.

GeoPossession is a project by the Coem (stylized as CŌEM) collective. It’s all about returning works of literature to their points of origin. The project’s leader, poet Yuki Nagae, has gathered poets and novelists to go to where that first spark of inspiration was, and read and record their works there on a special 3D microphone that captures the whole surrounding soundscape.

Currently, there are 14 different readings around Tokyo and you can access them via the free app Kalkul Aura (only on iPhones). The readings are in Japanese only, with poems in other languages planned to be added in the future. Even for those who don’t understand, it’s worth reveling in the feeling of digitally unlocking these audio poems. It’s like a little Tokyo secret and everyone passing you by as you listen will probably have no idea what world you’ve tapped into. A Sip of Haiku

Japan’s largest green tea distributor, Ito En is the image in most people’s minds when it comes to bottled green tea. More surprisingly though, is the fact that it has been serving us a dose of poetry too since 1989. Ito En holds an annual Oi Ocha Shinhaiku contest. The prize-winning poems are printed on the labels of its green tea bottles. It’s understandable if you haven’t been paying much attention to bottle labels, but you might want to start.

The contest has many categories, so you can expect a vast array of poems from elementary school students to the elderly and everyone in between. The topic is always free and no seasonal word necessary. There is also a category for haiku written in English.

Just last year, the popular competition had about half a million applicants. There are many different awards and honorable mentions, and 2,000 different haiku printed on labels every year, giving poetry lovers plenty of reading material.

There is more information on the official haiku competition website. 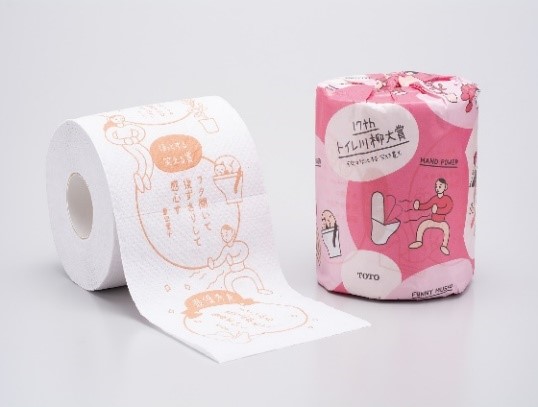 This is not as bad as it sounds but it puts poetry and toilet paper in the same sentence. Suspend your judgment while we unpack the details.

Toto, Japan’s most famous toilet manufacturer, is already well-known for its artistry. Its hi-tech toilets are somewhat of an attraction for tourists and an internet darling. The company is also a supporter of art and culture. Toto is behind the Tokyo Toilet Project, the sleek designer public toilets around Shibuya Ward including the transparent toilet by Shigeru Ban. On top of all that, the company has also been holding a poetry competition since 2005.

“Toilet Senryu” is an open call for senryu poems — the funny sibling of haiku. These poems have the same structure as haiku, but thematically they are comical. Think memes in poetic form. For this competition, Toto is asking for funny poems that mention toilets, plus different themes that change every year. The competition entries are judged by veritable senryu poets too. The winning poems are printed on toilet paper and published as a collection of senryu on November 10, officially designated Toilet Day in Japan.

If you can’t get a hold of the toilet paper, you can read winning senryu and honorable mentions on the official website (Japanese only).

Here is one of the honorable mentions from 2021:

Teleworking
There is only one place
To truly rest

And we all know what that place is.

We’re used to the Tokyo commuter trains being plastered with ads, but the Tokyo Metro has been trying to inject some pure art and culture for people’s commute. The transportation company commissioned art for some stations, and opened creative design competitions and a call for poetry under the name “Metro Literature Museum.”

The call for poetry asks poets to write original poems about life in Tokyo and winning entries are turned into hanging poetry posters inside the Tokyo Metro trains. This is a biannual event that has been taking place for more than a decade.

You can read all winning entries on the official website (Japanese only).