Aso leaves you at a loss for words — and that’s not just a figure of speech. As soon as the caldera opened before our eyes as we were driving into Aso we grew silent, stopped the car and just stood still taking in the surroundings. It’s a rare chance to clearly see you’re in a volcano, just by the juxtaposition of the flatlands and the ring of ragged mountains.

The smoke pillar rising from the crater was another giveaway. Aso is Japan’s largest active volcano, but at the same time the safest, experts say. It’s closely monitored and quickly closed off during more heated moments. Locals speak of it fondly as the most useful volcano. Legends say that the God of Aso scooped the top of the youngest volcano formation called Komezuka in order to give people rice for their fields. Beyond legends, Aso’s grasslands feed the cattle before they become the material for many thatched roof houses in Japan and its limonite is dispatched to Tokyo for cleaning its waterways. Aso from the Highest Point: Daikanbo

Daikanbo is the highest point where you are rewarded with a sweeping 360-degree view of the Aso Caldera and Aso City. That is unless you’re lucky to see a sea of clouds covering it. The natural phenomenon called “unkai” is most likely to appear on cold autumn mornings. You can also see the Aso Volcano or its five peaks to be more precise. Called the Aso Gogaku, the peaks from here form the outline of a lying Buddha. Once you see it you won’t be able to unsee it.

The view is majestic and gorgeous even in the dead of winter. The golden pampas grass sways in the cold wind like a sea of sepia. A few lone brown cows or horses can be spotted near the Milk Road winding down from Daikanbo, adding to the color scheme. In late February, comes the Black Aso, when locals burn the dry grasslands. Resembling a black gown from afar, it is then slowly dotted with early spring mountain flowers and new blades of grass. By May, it’s all lush green, the most often photographed Aso landscape. Lastly, as the year ends Aso gets snowfall creating gold and yellow hues. Aso From the Sky: Helicopter Ride

If you want to go higher than Daikanbo, only the sky’s the limit. For that, head to the theme park called Aso Cuddly Dominion. It offers different helicopter rides taking you directly above the active volcanic crater for a view that you can’t see otherwise. Especially in periods of increased volcanic activity when no one is allowed to climb the crater, it is your only chance to peek into it despite the columns of smoke. In calmer times you will see a volcanic lake instead. This is all provided the time is good for flying. In the hands of a former military pilot, the ride is smooth yet exciting. Once more, the experience leaves you speechless and with a heart full of awe. 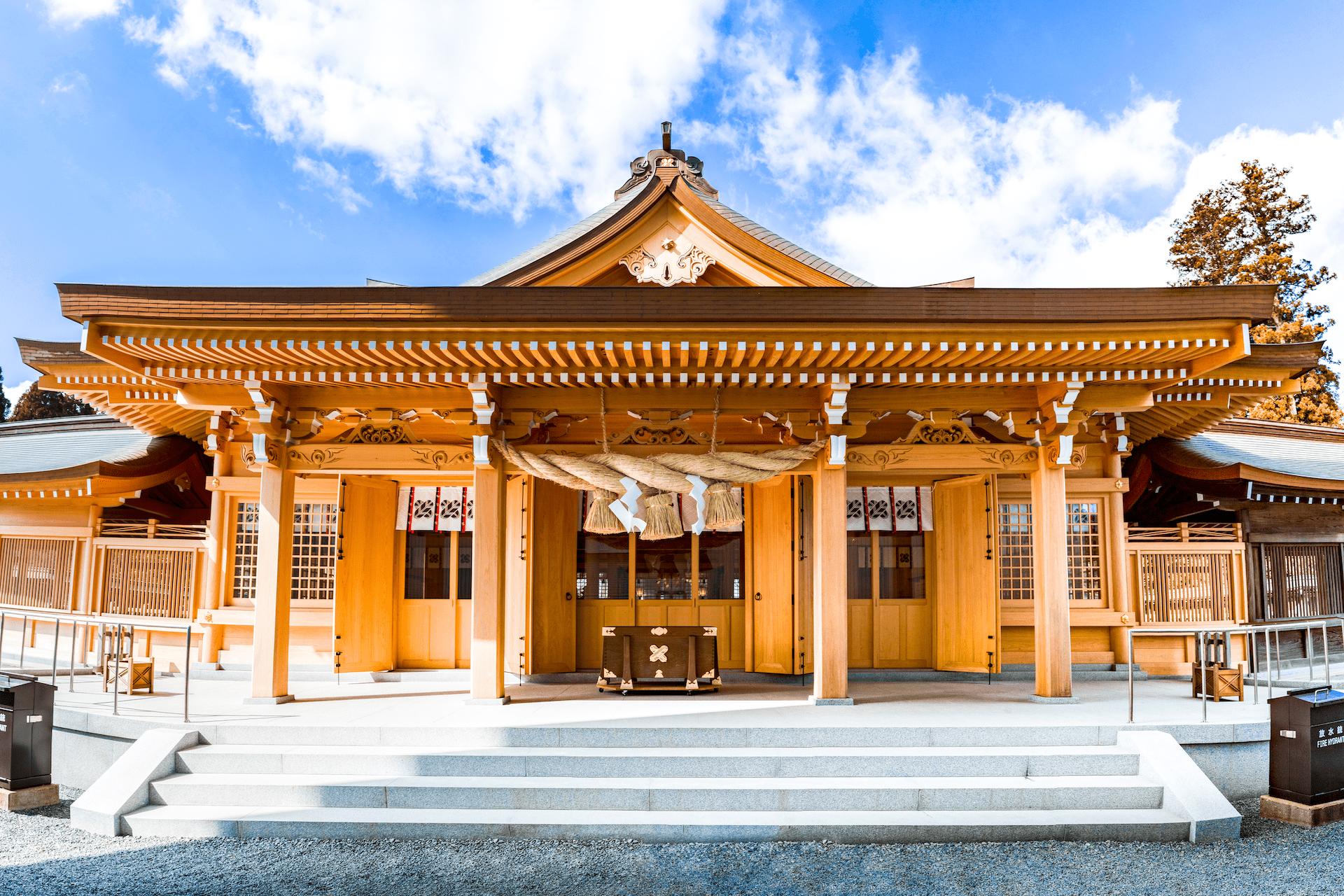 Pay a Visit to the Volcano God at Aso Shrine

It only feels right to visit Aso Shrine where the Gods of Aso are enshrined. The shrine, with over 2,000 years of history, has been through a few cycles of rebuilding and repairing, but none as devastating as the 2016 Kumamoto earthquake. Locals keep referring to the disaster as a fissure in time, talking about things before the earthquake and after. Due to the tragedy, almost all of Aso Shrine suffered damage but as of 2022 the rebuilding efforts are already showing results. The reconstruction is planned to finish in 2023.

Aso Shrine also has an unusual shopping street approach, it’s on the side instead of the classic main-gate approach from the front. This charming street is dotted with mossy spring wells and one of the most popular activities is to buy a fortune-telling paper (omikuji) and dip it in the waters to reveal your reading. There’s also a plethora of snacks, souvenirs, cafés and restaurants. A strong recommendation is Hanabishi, a restaurant specializing in local beef. Last Stop: Back in Time

Cherorin Mura is a dagashiya (a retro toys and sweets shop) connected to Showa Kan, an old electronics and games showcase by day and a bar by night. Akemi and Etsuo Higuchi, a lovely welcoming couple, run them respectively. What sets this place apart from other nostalgia shops are the whirring, buzzing, blinking machines. Everything works, from the 70-years-old fridge to the Space Invaders arcade games. Etsuo is a former electrician who repairs machines and gives them new life. He comes up with creative ways to connect old tech to new tech, because a 1950s TV cannot normally receive today’s TV channel frequency. He welcomes people to come visit, play a game, play a record or just enjoy the time slip.