From Rashomon to Ran, we look at some of the legendary filmmaker's best-ever movies

On this day 23 years ago, the movie world lost one of its greatest ever directors. Akira Kurosawa is widely regarded as the most influential filmmaker this country has ever produced. He began his career in cinema as an assistant before making his directorial debut with Sanshiro Sugata in 1943. His 30th and final film, Madadayo, came 50 years later.

“One thing that distinguishes Akira Kurosawa is that he didn’t make a masterpiece or two masterpieces; he made, you know, eight masterpieces,” was Francis Ford Coppola’s take on the Japanese man. Steven Spielberg described him as “the pictorial Shakespeare of our time,” while for Martin Scorsese he was simply “the master.”

Having directed so many classics down the years, it would be a fruitless endeavor limiting his body of work to a list of seven. We’ve decided to anyway. Here’s a look at some of our favorite Kurosawa films.

Some movies are so iconic, they transcend cinema. Rashomon is in that category. The storyline had such a strong impact, it led to a new phrase entering the English language: the Rashomon effect. It describes a situation in which an event is given contradictory interpretations by individuals involved.

This idea forms the basis of Rashomon. It centers around the rape of a woman played by Machiko Kyo and the subsequent death of her samurai husband (Masayuki Mori). Giving testimony at court, a notorious outlaw named Tajomaru (Toshiro Mifune) claims to have killed the man in an honorable duel. The wife then takes the stand and declares she was responsible for the murder before the samurai (speaking through a medium) says he took his own life. The final account comes from a woodcutter named Kikori (Takashi Shimura) who tells a priest and a commoner that all three had been lying.

It’s a kind of narrative structure that has become common in filmmaking, but at the time was groundbreaking. As was the fact that the movie featured scenes shot directly into the sun. Kurosawa’s first international hit, Rashomon won the Golden Lion at the 1951 Venice Film Festival. 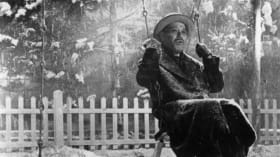 Partly inspired by Leo Tolstoy’s 1886 novella The Death of Ivan Ilyich, Ikiru is a true cinematic treasure. It’s a genuinely moving tale that provides an existential portrayal of a bureaucrat named Watanabe attempting to find meaning in his life when faced with his own mortality.

The film begins with an X-ray of Watanabe’s chest. “At this point, our protagonist has no idea he has cancer,” the emotionless narrator tells us. “But it would be tiresome to meet him now. After all, he’s simply passing time without actually living his life.” He goes on to say that our hero “might as well be a corpse. In fact, this man has been dead for more than 20 years now.” Watanabe, brilliantly played by Shimura, realizes his life hasn’t amounted to anything. After discovering he has a terminal illness, the diligent city officer is determined to do something meaningful by championing a proposal to get a public children’s park built.

An upcoming English-language adaptation of Ikiru titled Living is to star Bill Nighy (Love Actually) as Mr. Williams, a bureaucrat facing a fatal illness. The screenplay was written by Nobel laureate Kazuo Ishiguro. 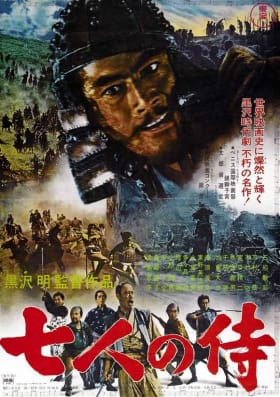 “A movie as rich as buttered steak topped with grilled eel,” was Kurosawa’s response when asked to describe Seven Samurai. Probably the director’s most well-known film, it edged out Vittorio de Sica’s Bicycle Thieves and Yasujiro Ozu’s Tokyo Story to top a Critics’ Poll on BBC for the best foreign language film of all time.

The jidaigeki takes place in a poor Japanese village in the 16th century. Constantly attacked by bandits, the local farmers visit a nearby town to see if there’s a samurai who can protect them. After a host of rejections, Kambei (Shimura) agrees and recruits six others to help. Kurosawa based several of the lead characters on historical figures including Miyamoto Musashi who provided the inspiration for master swordsman Kyuzo (Seiji Miyaguchi). That part was originally going to be played by Mifune before Kurosawa decided to create the role of Kikuchiyo for him instead. Performing as a fictional character, Mifune was given license to improvise. He reportedly watched films of lions in the wild to prepare for it.

Widely considered one of the finest celluloid reworkings of a William Shakespeare story ever made, Throne of Blood transposes the plot of Macbeth from medieval Scotland to feudal Japan while also mixing in elements from Noh theater. As with ‘The Scottish Play,’ the central theme is unbridled ambition and how absolute power can corrupt mankind.

Kurosawa once again turned to Mifune for the lead role of Taketoki Washizu while Isuzu Yamada plays the part of his conniving wife Asaji. After defeating the enemies of Lord Tsuzuki (Takamaru Sasaki) in battle, Washizu and fellow commander Yoshiaki Miki (Minoru Chiaki) walk through the dark and dense forest where they come across a spirit-like seer. The pair are told that Washizu and Miki’s son will both eventually become Lords of Spider’s Web Castle. Upon hearing this, Asaji sees an opportunity for her and her husband to seize power. She convinces him that he could be murdered if Lord Tsuzuki hears about the prophecy. And so begins the plot to kill the lord leading to further bloodshed thereafter.

A known admirer of MacBeth, Kurosawa had reportedly been planning an adaptation much earlier but postponed it when he found out that Orson Welles was releasing his own version.

After watching spaghetti western Fistful of Dollars, the movie that helped launch the career of Clint Eastwood, Kurosawa decided to send a letter to director Sergio Leone. “Signor Leone, I have just had the chance to see your film. It is a very fine film, but it is my film,” he wrote.

Of course, Kurosawa was talking about Yojimbo. Meaning “bodyguard” in Japanese, it stars the charismatic Mifune as the titular character. He’s a mythical ronin who, like Eastwood’s The Man with No Name in Leone’s Dollars trilogy, has no identity. When asked for a name, he gives himself the pseudonym of Sanjuro Kuwabatake (meaning “30-year-old mulberry field”). This was a reference to his age and what he could see out of the window at the time. Arriving in new a town, he’s greeted by a dog carrying a severed hand. It’s a place that’s been overrun by two rival criminal gangs. Realizing he can make some money, Sanjuro plays the warring factions off against each other.

Leone failed to secure the remake rights for Yojimbo and was sued by Toho. It was eventually settled out of court for an undisclosed fee. Kurosawa later admitted that Yojimbo had been loosely based on Dashiell Hammett’s novel The Glass Key. There are also similarities with The Red Harvest, another of Hammett’s books.

Following the release of his first film in color – Dodes’ka-den in 1970 – Kurosawa was at his lowest point. Despite the movie later being nominated for an Oscar for Best Foreign Film, it was considered a flop. Denied funds by Japanese studios, the director then attempted to take his own life by slitting his wrists in 1971.

The following year, Soviet studio Mosfilm approached the Dodes’ka-den producer to enquire about the possibility of Kurosawa directing a cinematic adaptation of the Russian memoir Dersu Uzala. It’s named after a nomadic hunter played terrifically by Maxim Munzuk who guides a party of soldiers led by Captain Arsenyev (Yury Solomin) through the snowy Siberian wilderness. Set before the Great War, it’s a simple yet powerful tale of human bonding, particularly between the main two characters. Uzala earns the respect of Arsenyev and his troops after helping them through several deadly encounters.

Kurosawa’s first and only non-Japanese language film, it won an Academy Award for Best Foreign Language Film and sold more than 20 million tickets in the Soviet Union.

In the 1960s Peter O’Toole reportedly tried to persuade Kurosawa to direct a movie version of King Lear. “I think he knows Lear in his bones, that monolithic, feudal thing,” said the renowned actor. Clearly, he was onto something as Kurosawa did eventually go on to rework the Shakespeare play as Ran in 1985. According to the Japanese director, however, it was the story of the Sengoku Era warlord Mori Motonari that first inspired him when he began working on the screenplay in the 1970s.

“His three sons are admired in Japan as paragons of filial virtue. What would their story be like, I wondered, if they were not so good?” Kurosawa said. As he got deeper into the script, the similarities with King Lear became clear to him. Instead of daughters, though, the tale focuses on the leader’s relationship with his three sons. Preparing to step down, Hidetora Ichimonji (Tatsuya Nakadai) divides his kingdom between them. Like Goneril and Regan in Lear, Taro (Akira Terao) and Jiro (Jinpachi Nezu) betray their father. The only one loyal to him is Saburo (Daisuke Ryu), but he’s been banished for not agreeing to the initial plan.

Kurosawa received his first and only Best Director nomination at the Academy Awards for Ran. In the end, he missed out on the top prize to Sydney Pollack for Out of Africa. The movie was also nominated in three other categories, winning one for Best Costume Design.