New York. Paris. Tokyo. Vogue is a rich and storied dance form, taking the world by storm. In recent years, voguing has become increasingly prominent in Tokyo and Osaka’s house music scenes. It can be seen at clubs, in shows and in the promotional videos of duo AyaBambi. Compared to other fad dances popularized on Vine and later TikTok, vogue is an interesting and somewhat controversial transplant because of its deep roots in Black and Latinx LGBTQ history. Appearing in Harlem’s ballroom culture as the queer parallel to breakdancing in the 1960s and 1970s, voguing predates Madonna.

Japan now is home to chapters of several major American vogue “hauses” (the preferred spelling of “house” within the drag community). These are including but not limited to the Haus of Ninja, the Haus of Xtravaganza, the Haus of Oricci and my own dance teacher’s family, the Haus of Mizrahi. As a dance, vogue is best recognized by its distinct “freeze-frame” arm and hand poses, which imitate models from fashion magazines and resemble, at times, Egyptian hieroglyphs. Whether it can trace its earliest roots to prison inmates or the ballroom scenes where it later became famous—or to both—is disputed. In the 1970s, drag performer and choreographer Paris Duprée (father of the Haus of Duprée and a participant in the documentary Paris is Burning) revolutionized this budding dance form and created the first school, Old Style, that we still see today.

Traditional vogue performances were more like competitions or lyrical arguments than, say, a ballet recital: Butch and femme queens competed in dance battles where they pantomimed insults, boasts, and haughty attitudes.

Vogue continued to explode in popularity as a competition category in the ballroom scene in the following decades. It also began to evolve into new forms and types. From Old Way (pre-1990s) into New Way (post-1990s, geometrical shapes, flexibility). Then it developed from New Way into Vogue Fem (post-1995, elaborate stunts, exaggerated femininity, high fluidity). Further elements within Vogue Fem include duck-walking, cat-walking, floor-work, dips and hand control.

The Vogue Artists of Japan

As in mainstream America, vogue first became the rage in Japan with Madonna’s hit song “Vogue” in 1990. Also like America, this boom quickly faded within a few years. A few voguers, however, remained active in Fukuoka throughout the 1990s and early 2000s. It is thanks to these artists that Japanese vogue has seen a resurgence this last decade. Today, Tokyo-based Legendary Mother Koppi Mizrahi, my teacher, is one of the pre-eminent vogue artists of Japan. As well as performing, hosting balls and teaching, she also represents the culture of vogue in East Asia. Her first exposure to vogue came after she saw the Japanese voguing team “Asience” (styled as ASIENCE) appearing on the TV show Super Chample.

“I was doing other dance styles such as hip hop and popping before voguing. But I wasn’t really serious about dancing then,” Koppi says. “I saw a voguing performance by Asience at a dance event when I was in university. I’d never seen dance like that before but I was so curious how they controlled their hands and poses. I talked to the leader of the team and decided to take his classes. Then I fell in love with voguing because it gave me a whole new persona. I felt like I could be fully confident.” A few years after throwing herself into the vogue world, Koppi began teaching. That was around 2008 and she began throwing balls three years later. She’s been instrumental not only in sharing the dance, but also the culture, system and the ballroom scene in Japan and Asia. Koppi was named the first international Legend outside the US in the ballroom community in 2016. She has also won trophies in every vogue category. In 2019, she became International Mother of Haus of Mizrahi. 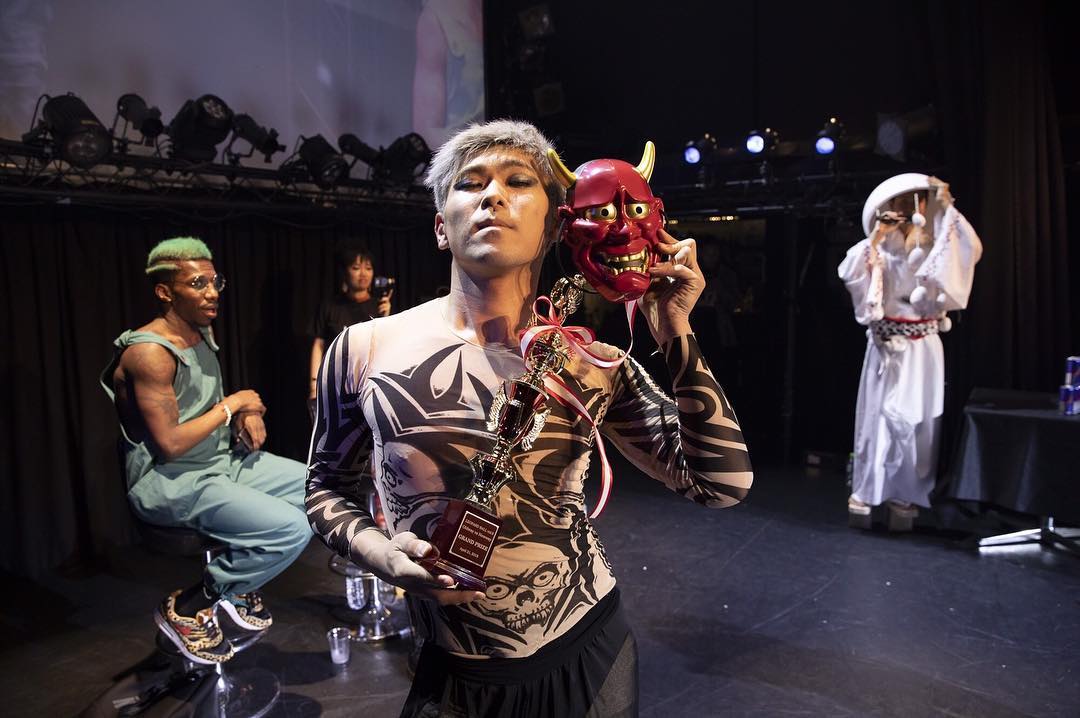 Born in Hokkaido and based in Osaka, Showta Oricci is the father of the Japanese chapter of the Haus of Nina Oricci. Hundreds of miles north of Tokyo, Showta recalls watching the same episode of Super Chample as Koppi.

“It all started when I was in junior high school,” says Showta recalling his exposure to Asience. “However, I didn’t have a chance to learn it in Hokkaido, so I watched the recorded program over and over again until I’d learned the ‘deflower’ hands technique.”

Showta went on to study vogue in New York for three months, studying under Benny and Javier Ninja as well as Danielle Polanco.

“I still remember how happy I was to take these lessons,” he says. “That’s when I knew I wanted to join Ninja, my old haus.”

Showta later joined the Haus of Oricci, a young haus established in 2019, as Oricci had no chapter based in Asia. Becoming father of Haus of Oricci’s Japanese chapter made Showta a pioneer in Asia’s vogue scene. Showta and Koppi are two of many Japanese vogue artists who’ve given the dance form new life in this country. Together with celebrated performers and dance instructors like Chycca Xtravaganza, these voguers have been organizing balls, teaching classes and managing international hauses throughout the major cities. As the pandemic hit, many of these balls went online, or adapted to the situation, maximizing social distancing and mask usage. The vogue scene in Japan is still small enough that almost all members from the major hauses know one another. They often compete and perform together in balls or in “kiki hauses”, a subculture within vogue, similar to casual clubs.

The Soul of Japanese Vogue

With the rise of these celebrated vogue artists, as well as famous dance units like AyaBambi, Japan is getting a reputation as a vogue hotbed. The scene is expanding very rapidly and is adopting a distinct regional identity and flair.

“I think Japanese people are very good at sublimating their own style into dance,” says Showta. “So, with enough care we can expand the culture into a huge scene.”

However, Koppi, a staunch ally of the LGBTQ community, is concerned with how vogue culture is treated in Japan.

“Voguing is considered just a dance style here and people tend to focus only on hand movements,” she says. “Many people skip the history and culture. Unfortunately, most people in the Japanese ballroom scene are straight. We are trying to bring more people from the LGBTQ community as that is where it originated.” This is something Chycca Xtravaganza notes as well about her early entrance into vogue when she was active in London.

“I wasn’t aware of the LGBTQ community,” she says. “I didn’t care about race, gender, origin, occupation, sexuality, or even age as long as I didn’t get in trouble with the law. After I returned to Japan, I was often asked in detail about my LGBTQ status. And sometimes I wondered if it was something I should be concerned about.”

In the cities of America, the relationship between modern vogue and its historical roots in oppressed Black and Latinx communities is immediate and tangible. This history lives on in the relationships between members and their haus parents and grandparents, as well as in queer media like Pose. In Japan, however, it’s more difficult to maintain this connection, especially as the dance booms in popularity and moves beyond the direct tutelage of leaders like Koppi. “All voguers must keep learning and updating our knowledge by accessing the original ballroom in the States,” she says. “We always have to pay respect to the original ballroom culture created by Black and Latinx LGBTQ people. I will need to promote ballroom harder and try to make the scene bigger and better with the LGBTQ community in Japan.”

Showta agrees. An openly gay man himself, he hopes to take more action in the LGBTQ scene. He’ll begin holding balls in Doyama-cho, the gay district of Osaka.

“I’m hoping to create a space that’s not just about dancing, but one that’s similar to a ball in New York,” he says.

The Future of Japanese Balls

With the passion of artists like Koppi, Showta and Chycca and the respective hauses they mentor, the future of vogue in Japan is bright. Even if the current fad of drag, vogue and other queer cultural touchstones fades from the mainstream, the subculture these artists preside over thrives in the underground scene.

All three hope that the popularity of shows like Pose and Legendary will open a sustained interest in vogue and haus culture, both for audiences and participants. These ballrooms function as more than simply hobby circles, but as important communities for misfits and LGBTQ people.

“It’s a place where I can express myself as I can’t in everyday life,” Showta says. “You don’t necessarily have to be a vogue dancer to participate in ballroom. Learn the categories, watch Youtube and other media and if you feel the urge to try it, you can.”

“Ballroom hauses are for everybody who needs to escape from discrimination,” adds Koppi. “You can find a new you. You can be like a model, a star, or a diva. And you can express yourself in your art form. You can be more confident in yourself as long as you have the attitude.”

“Ballroom is an escape from the real world—you can be as you want to be.”