People often ask me why I moved to Japan, and I try to formulate a response that covers my various reasons in a relatively short statement. But I usually fail to keep my response acceptably short and still manage to miss the core reason. Here it goes – as a solo woman traveler and avid walker – I moved to Japan to be able to safely and endlessly walk. I see Japan as “the country of safe walks.” And this applies to both city walks in its giant metropoles such as Tokyo where street crime is almost inexistent and rural walks where there is such strong commitment by the selfless locals to keep the trails accessible and safe for everyone.

So, I try to make as much time as possible for both urban and rural walks in Japan, and my latest walking trip took me to Tokushima and Kochi prefectures in Shikoku. During the two-weeks-long trip, I explored some of the most scenic trails and temples of the famous Shikoku Pilgrimage Route but also made time to explore the small, often over-looked but marvelous fishing villages along the coast, which almost begged me to slow down with their unintimidating and friendly charm. Tokushima – From Mountaintop Temples Down to the Surf Beaches

My trip started with a short flight from Tokyo to Tokushima, which provides easy train and bus connection to most places in the prefecture including my starting point – Temple 19 (Tatsue-ji). Based on my pre-trip research, I wanted to start with the route between Temple 19 and Temple 22 – commonly referred to as among the most beautiful trails along the Shikoku Pilgrimage Route. 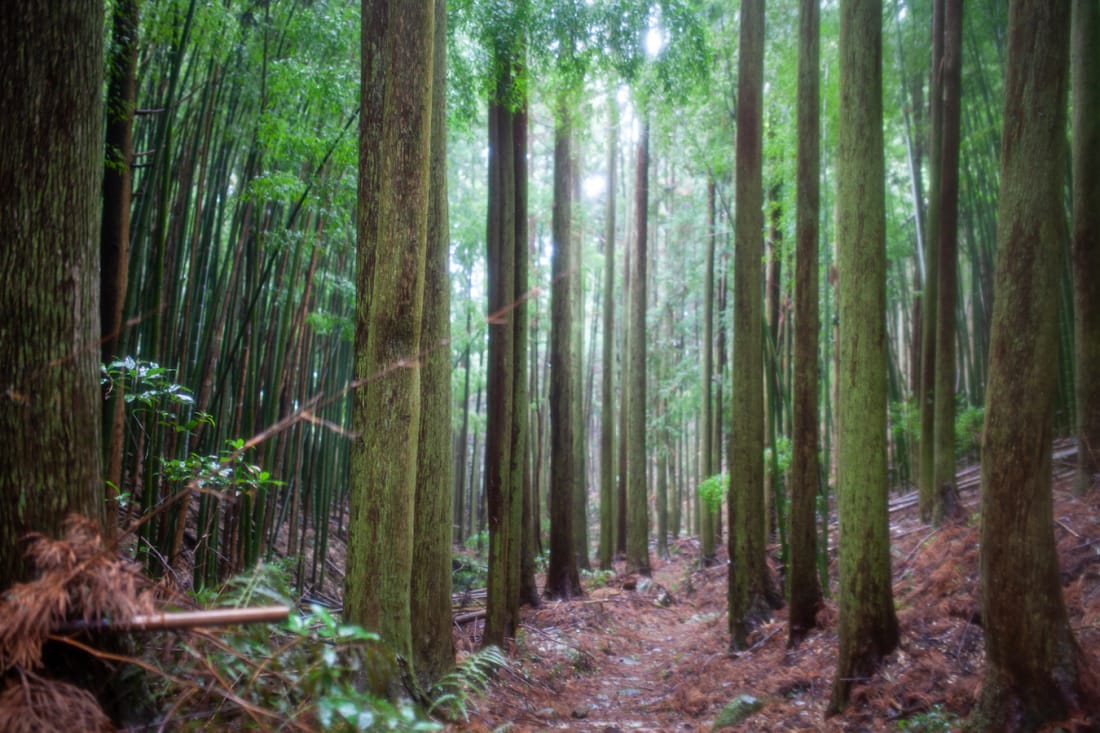 I started at the modest but beautiful Tatsue-ji temple and made my way to Byodo-ji temple through a series of up and down hikes in the course of two days. The two successive hikes to Temple 20 (Kakurin-ji) and to Temple 21 (Tairyu-ji – referred to as “nansyo” or “difficult place”) may challenge your legs due to the climbing they require. But rest assured that your efforts will be fully rewarded thanks to the beauty of the trails and the novel-like atmosphere of both temples. On the alternative, Tairyu-ji is also served by a ropeway – the longest in Japan – which will take you to the temple in around 10 minutes from Wajiki (open year-around and costs ¥2,470 for adults round trip).

Even in a relatively short time frame of two days, one could easily sense that the walking in Shikoku was as much of a cultural experience as it was a physical- and nature-oriented one. The trail first took me past rural villages, made me climb through foggy forests to reach impossibly atmospheric mountaintop temples and then gently led me down to the ocean and Shikoku’s famous surf beaches.

The dynamism almost flushing out of those beaches against the background of peaceful fishing villages belonging to almost another era reminded me why I love Japan so much; the perfect fusion of extreme pace on one side and slow and genuinely traditional life on the other side, which is made possible by mutual respect. Shikoku is the perfect place to experience this harmony unique to Japan. An Overnight Stay in Hiwasa

My first oceanside overnight stop along Tokushima coast was Hiwasa, a small town of 5,500 residents. The town, despite its small size, is home to a good range of sites including a sea turtle museum – Hiwasa Chelonian Museum Caretta – and Yakuo-ji, the Temple 23 of Shikoku’s 88 temples. There are also many eateries in the town including Hiwasaya where I enjoyed a delicious set meal of local sashimi while chatting up the only other foreigner in the restaurant.

Like many other places in Shikoku, Hiwasa is the adopted home of a group of young Japanese entrepreneurs who opened stylish, but budget-friendly, hostel-type accommodation to appeal to independent travelers. I stayed at one of these hostels – Ichi the Hostel – which also has its own pub attracting not only the hostel guests but also the locals.

Hiwasa is also the gateway to the scenic and low-traffic Minamiawa Sunline Route, which takes you to the small town of Mugi in less than four hours on foot. The whole road follows the Pacific Ocean with various detours to the beaches making me once again feel in awe of the wide range of wonders that Shikoku is home to. Aki – The Beating Heart of the 88 Temple Pilgrimage

My one-night stop at Hiwasa was followed by another two days of oceanside walking and train and bus combination, which eventually took me to Kochi Prefecture and one of its main landmarks – Cape Muroto. As one of the two main capes of Kochi prefecture (the other one being Cape Ashizuri), Cape Muroto, which is shaped by volcanic activity, has a lot to offer including a UNESCO Global Geopark with large rock formations, oceanside hiking trails, Hotsumisaki-ji Temple (Temple Number 24 along Shikoku Pilgrimage Route) and Mikurodo cave where Kobo Daishi, founder of Shingon Sect of Buddhism in Japan, is said to have meditated for years. One can easily spend a week in the upper coast of Kochi starting at Cape Muroto and ending near Kochi city. Aki town where I stayed for two nights, and located right in the middle, is a perfect base to discover the area. Once the beating heart of Kochi Prefecture – a role now assumed by Kochi city an hour away – Aki fortunately still carries the small-town charm where the traditional architecture has not entirely left the scene to more modern but uninspiring buildings. On my first night in the town, I was treated to a socially distanced community concert by my wonderful host at Kochi no Ya Hostel. The concert was organized as a gesture to the locals by a business owner in Aki for their continuous support to keep his business afloat during the pandemic.

Aki, which is conveniently linked by bus and train to the various sightseeing stops along the upper coast of Kochi such as Cape Muroto, is also within a walking distance of Ioki Cave, which is formed by ocean waves and is home to 40 different species of fern covering the canyon walls. The hiking trail, which passes through the cave, takes you to a beautiful waterfall making you forget that you are actually within minutes of a national road. Another memorable stop during my trip was Susaki town in Kochi that I reached by walking another pleasant and low traffic oceanside road – Yokonami Kuroshio Line. At first, Susaki appears as one of the ghost towns of Japan where you can sense the impact of the depopulation phase that the country goes through. But that feeling only lasts until you open the door into the lively restaurants, outdoor yakitori joints and breakfast cafés full of life, or visit the picturesque and small port in the morning where tens of small fishing boats make their way in and out for their daily catch including the Shikoku classic bonito There are numerous accommodation options in Susaki including wonderful Kurashi no Nekko where I stayed, which is ideal both for families and also solo travelers with their accommodating fee policy. Down by the Shimanto River

My final stop during my Shikoku trip was Takase town by Shimanto River that can be reached via Nakamura train station, which is connected to Kochi by the express train. I based myself at Shimanto Riverside Hideaway – a beautiful traditional Japanese house converted into a guesthouse with three guest rooms and fully equipped kitchen. Shimanto River is a place to please both thrill seekers with its mountain biking trails and nature lovers with its walking trails and kayaking opportunity on the river.

While the peacefulness of the surrounding village and the comfort of your room may make it hard to wake up, the early morning fog over the surrounding mountains and the river, which can be enjoyed by the nearby Chinta Bridge, is something to not miss. If you have extra time, the area is also a perfect gateway to the nearby Ashizuri-Uwakai area, which is home to beautiful Kongofuku-ji Temple and oceanside Ryugu Shrine. My two weeks in Shikoku could easily be turned into two months and I would still not be able to cover all its wonders. I went to Shikoku to walk and enjoy the nature but came back with something much more meaningful – the much-needed warmth extended by Shikoku residents to a foreigner during this challenging time of our lives.